And on we go

Another 10 days have passed since our last entry.

Since we left of Buxton much has happened again.

On a rainy day, we have said goodbye to the Peak District. It was Saturday afternoon and we were barely out of Peak District, it soon got warmer temperatures and it was quite sunny.

We arrived in the afternoon and Nantwich and walked first around the ‘Nantwich Lake “and then into the city. What a sight for sore eyes! Parts of the city are half-timbered houses that have survived a terrible fire in 1583. In the house where the town library is housed, you think the house could collapse at any moment. 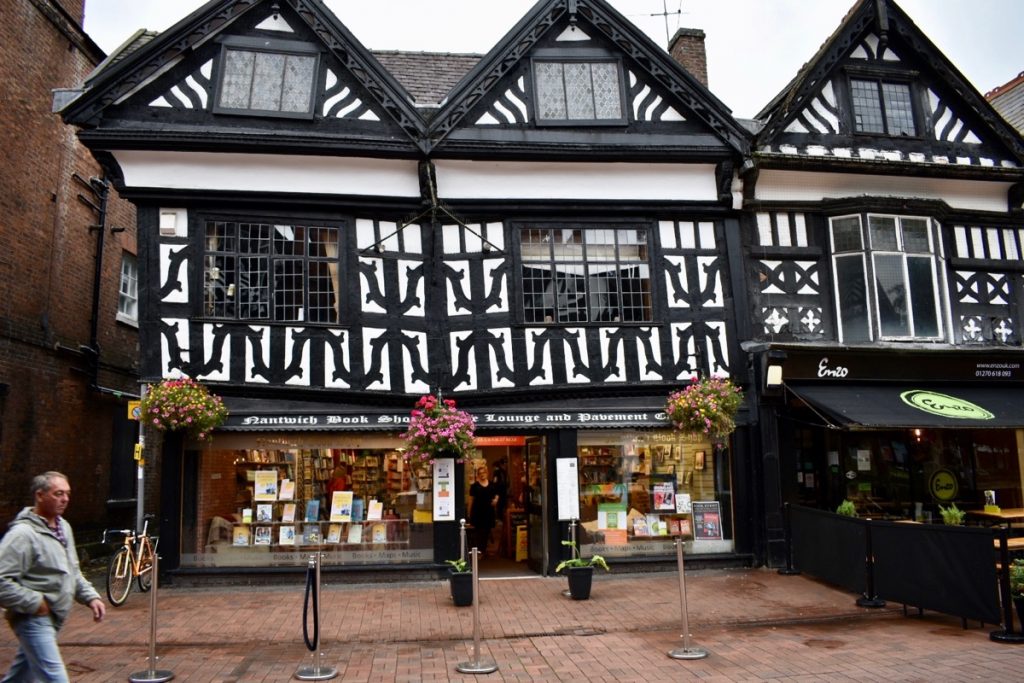 Our “death march” through the old town finally ended in the supermarket. Hiking does not only make one adventurous but also hungry. Only the fact that we have to carry everything saved us from a hamster buying.

On Sunday, we made our way toward our next stay in Pinsley Corner farm at Oly, Sarah and Lily Lowes campsite.

We had investigated on the internet that there must be a channel in the area. At the first sign, which pointed to a channel, we turned off and landed   – in the the middle of a horse show, a dog beauty contest and a fundraising event for the water rescue. And – we finally found the true, the real Stuart! What a joy! He wanted to be actually painted and all was genuine and real. Also an artist – it should be a great honor and a pleasure for him and for us.

The next night we spent truly on a wide spot on the road. A strip of meadow, level and flat invited you to park for the night. The tiny village should not invite young people to have a rendezvous with rock music.

And suddenly a car stopped in front of us and with a big grin a farmer climbed out and fed his calves. When I asked if we could stay here overnight, he said, „I see no reason why you should not“. He was not only friendly and outgoing, but told us of his stays in Germany, Spain, Italy and Switzerland. And finally he asked if we needed a toilet or a shower. His son lives right on the next road to the left. There we should go if we need something. We were stunned by such a friendly gesture.

This parking site gets top marks from us.

The next morning we were on our way to Oly and his family and his great campsite. The meadow, certified for 5 vehicles had except us already three vehicles. A camper was just about to pack up, another was waiting for his place. We should put our car left from the remaining caravan as Sarah described to us. When we turned the engine off our Big Fredi, the neighbour came out of his trailer and walked off the distance between his vehicle and us. He had measured that we were too close. At least so and so many feet. Immediately our neighbor got a nickname: the “pacemaker”. He then showed up to be generous and allowed us to stay though we were at a small distance.

Quite different people we met were Pat and Mel. They were extremely interested in Face Europe and even visited us the next day in Sound Methodist Chapel where Wilfried finally could paint the correct Stuart. Mel had accurately studied the photo book of Wilfrieds portraits and gave us his personal comments! Thanks again for that. Mel, you were the one who had been studying the images the most careful.

In the evening, the family Lowe, so Oly, Sarah and Lily hosted us a trip to Nantwich. Lily is very interested in the history of the city with her 9 years and could provide us together with her parents a great insight of the city. We were asked if Wilfried would possibly  like to  draw Lily’s art teacher during her art class. That would be very special and immediately the Lowes were active and organized everything for Wednesday.

On Tuesday, therefore Stuart was painted and on Wednesday Charlotte was drawn. Everything soon to be watched on YouTube! Do not miss it! We kindly ask for your „thumbs up“ and please don’t forget to subscribe!

Stuart was a fine storyteller, very relaxed and comfortable. Thank you Stuart for your openness and your time!

The afternoon in Lily’s school was very special. Charlotte offers children very child-important tips and could keep the children’s interest for the portrait painting all the time. The children drew each other and she pointed out things that have to be considered also by an artist. The children were very curious and were allowed to watch the process of drawing their teacher.

Thanks to the discipline of the class and Charlotte who leads the 36 children super in the class no camera and nothing else broke during the drawing session.

We were really also pleased that Lily wanted to be painted. This then happened on Thursday after school. Lily is a very sweet girl and we liked to chat to her as if she was an adult. She showed quite a stamina and it was not only for us but also for her lots of fun.

In the evening after Lily’s portrait painting, we were invited to a delicious “Toad-in-the-hole” with fried potatoes and vegetables and a dessert of apple pie with vanilla ice cream. All that Sarah had prepared for us after a long day’s work for us. Thank you Sarah!

On Friday we had to say goodbye to the Lowes. But we could not go before Oly took us to the store in Nantwich and helped us buy the right parts for a drain tap in the gray water tank. Thank you, Oly!

We are very grateful for the special week with such amiable people who always behave sustainably and so pay attention to their own health as well as the health of nature.

The loving and always attentive contact with Lily has also impressed us very much.

We are now on the way to Mark in Desborough. We had already met him during the first Face Europe portrait as a spectator and we know that he also has great interest in portrait painting, since he himself is an artist.

Friday night the problem of a quiet parking space has arisen again. We had to leave the first on Blithfield reservoir very quickly. Young people with open car doors with loud music playing show no good behavior, and a discussion seems pretty hopeless. So we pack everything together in the dark and go to the next place. There, the noise is at least further away and it is a bit quieter.

An Aldi-stop for the most necessary to eat and then we went on through farmland to the Rutland Water reservoir lake.

For the surfing competition we were not signed in and also for the running race around the lake we were too late. Bad luck. So we just did a walk along the shore, in the morning in one direction and in the afternoon in the other direction.  In order to not rust completely.

In the evening we drive a few kilometers further and stand at the side of a less frequented street.