in Winchester and the car park in the town center which was specially reserved for RVs gave a good night’s sleep. Lisbeth, who wanted to see a little bit of the city Winchester – which after all was capital before London was. It is beautifully surrounded by forests and fertile fields.

In the middle of the city a park is located at the River Itchen. It is very natural and wonderful for runners and walkers. 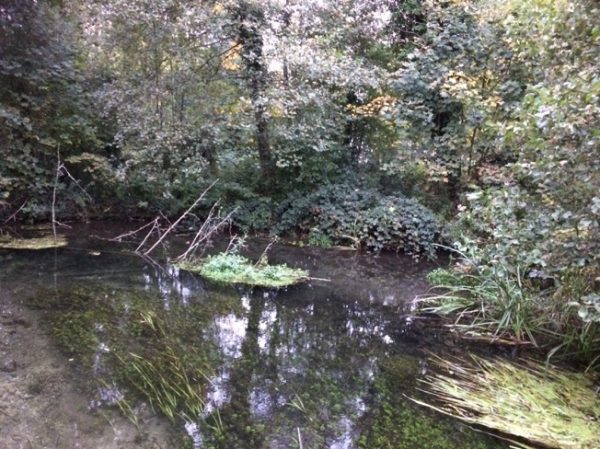 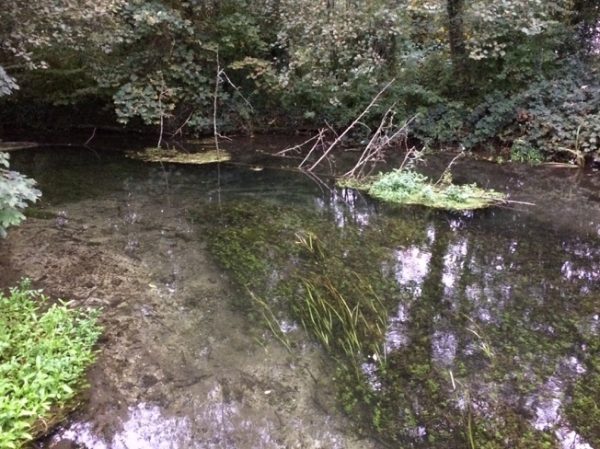 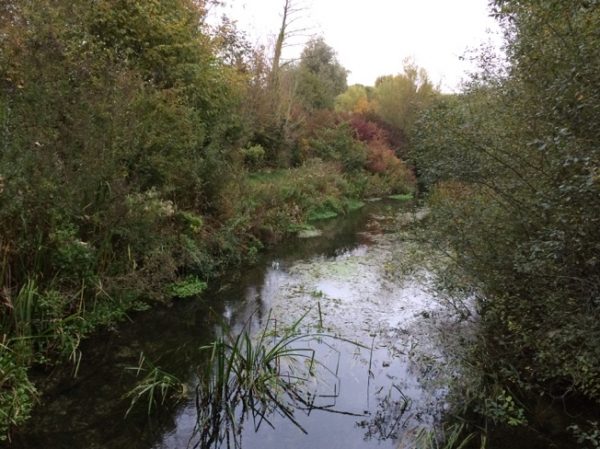 The next morning we wanted to solve the problem of the hot tire and asked at the gas station for the nearest workshop. The information was too vague: third road left. There was nothing. So again we asked Mr. Google and then began an odyssey from service station to service station. Each sent us to someone else. Finally, a mechanic noted that the rear dual wheel had a „flat tire“. He referred us to a workshop, which should help us. However, arriviving there, it was Friday afternoon and the motivation at the workshop had arrived at the weekly low point, we were directed diagonally opposite to the tire dealer.

When we asked for a new tire or its installation, we had to learn that Big Fredi was too large and the jack can only lift 2.5 tonnes. Wilfried’s help for offer was knocked out because of “security risk”.

Just imagine this: you stand in front of the tire dealer and they tell you that they cannot mount tires. But this IS his actual business. Very weird.

From there we did not know what else to do and we ended up calling the ÖAMTC to get the problem solved. An hour later, AA, the English breakdown service changed the tire IN FRONT OF THE WIRE SHOP. 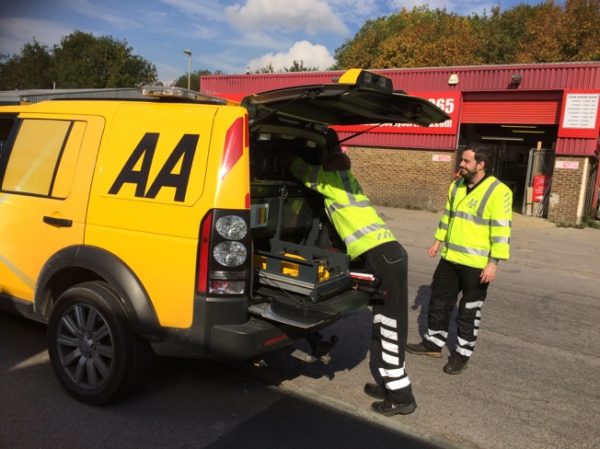 The inner right dual tire was completely broken. This had rubbed on the front wire and generated heat and stench. We were pleased that the tire dealer sold us at least a spare tire, which he all of a sudden did have on stock. So we did not have to touch our spare tire.

The two friendly AA technicians posted for a friendly goodbye foto and we were full of hope that the problem would now be solved and we could continue our journey. 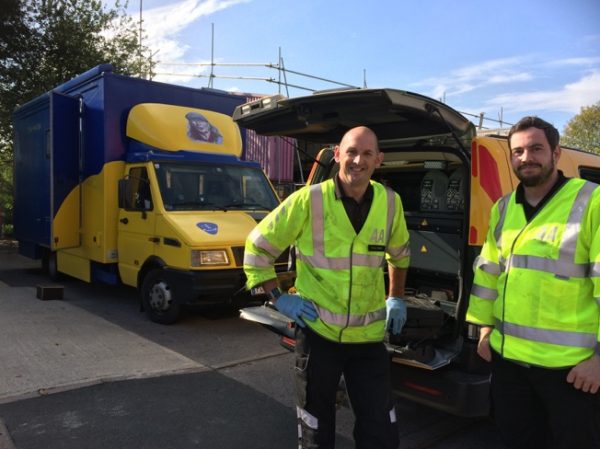 But immediately after we started Wilfried noticed the same sound he had heard a while ago before we had changed the tire. Thus, although we had solved a problem, we had not removed the cause.

After 2 km on the highway: the total “OFF”. Just made it to the parking bay. ÖAMTC had to be called again. Another waiting time began.

Then, some hours later the next AA employee raced in the lay-by with a tow truck. In the meantime it was  just before nightfall. Once more disassembly of the tire had to be done and found out that the bearing was broken. Continuing impossible. 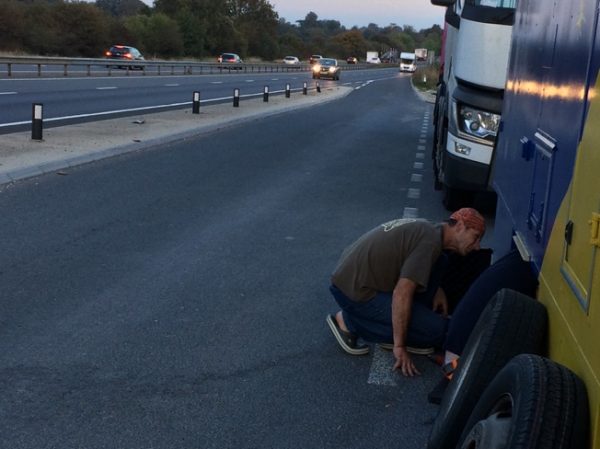 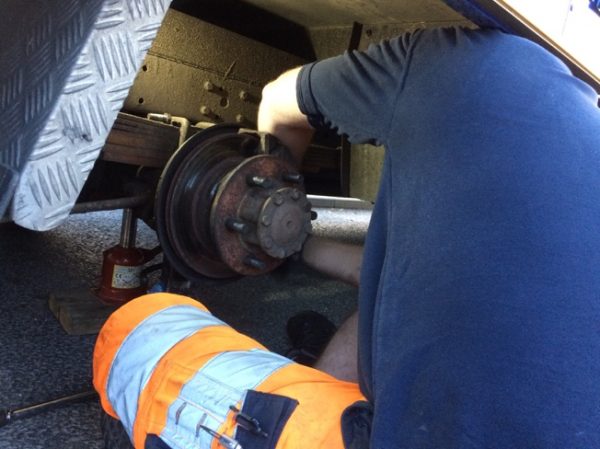 We emptied Fredi’s precious water resources, took out all heavy stuff from the car, but the tow truck had not enough strength for such a bold Fredi. So a larger tow truck was ordered for the next morning. Everything always negotiated with ÖAMTC in Vienna.

On Saturday morning, as agreed, the supposedly bigger car appeared which should only tow us to the nearest garage.

From the outside it differed not from the one of the day before. However, he finally had enough power and a better lifter, Big Fredi could even ride on top of a car. I think it has given him a great deal of pleasure. In the narrow round about, he has pretty much leaned in the curve and danced for joy. Lisbeth could see his eyes light up in the rearview mirror. Herself was dizzy, but the driver only commented : „ firmly connected”

After Lisbeth’s last night dream where Fredi tipped over, the reality was now better.

We arrived safely at the workshop. Behind there is a „big Wiesen“ (we have October, and Wiesenfeste are even in Salisbury) and Fredi will be restored, hopefully on Monday. 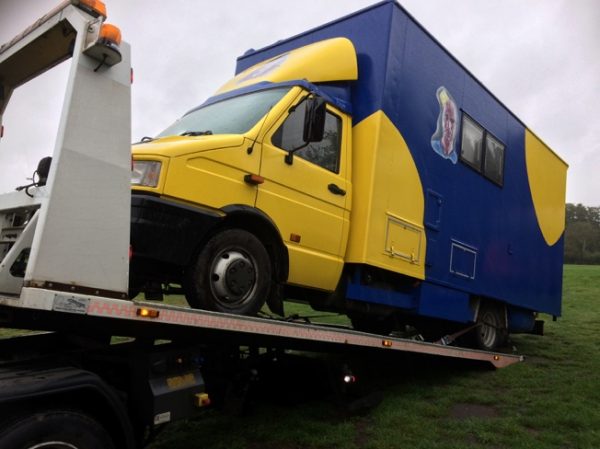 It rained all day today, now the rain has given way to the storm and from tomorrow on it will be sunny again.

We have enough stock of food to eat, we get electricity from the workshop and then we’ll see what happens on Monday.

Anyway, we have now been towed from Winchester to Southampton and stand at the entrance to the “New Forest National Park.” Between Plaitford and Nomansland. Yes, that’s really the village’s name, and it promises to be a quiet weekend.