Do we deserve so much happiness?

Since 7 January 2022 we have been something like caretakers at Kykao Brewery. Already on 8 January the first portrait was made and the last one was done on 10 March. So in these 2 months there were 27 portraits (19 Greek, 4 French and 4 German). Of course, I would have to gender it now, so of course there were women and men. And every week we told to ourselves: “We’re staying one more week!” 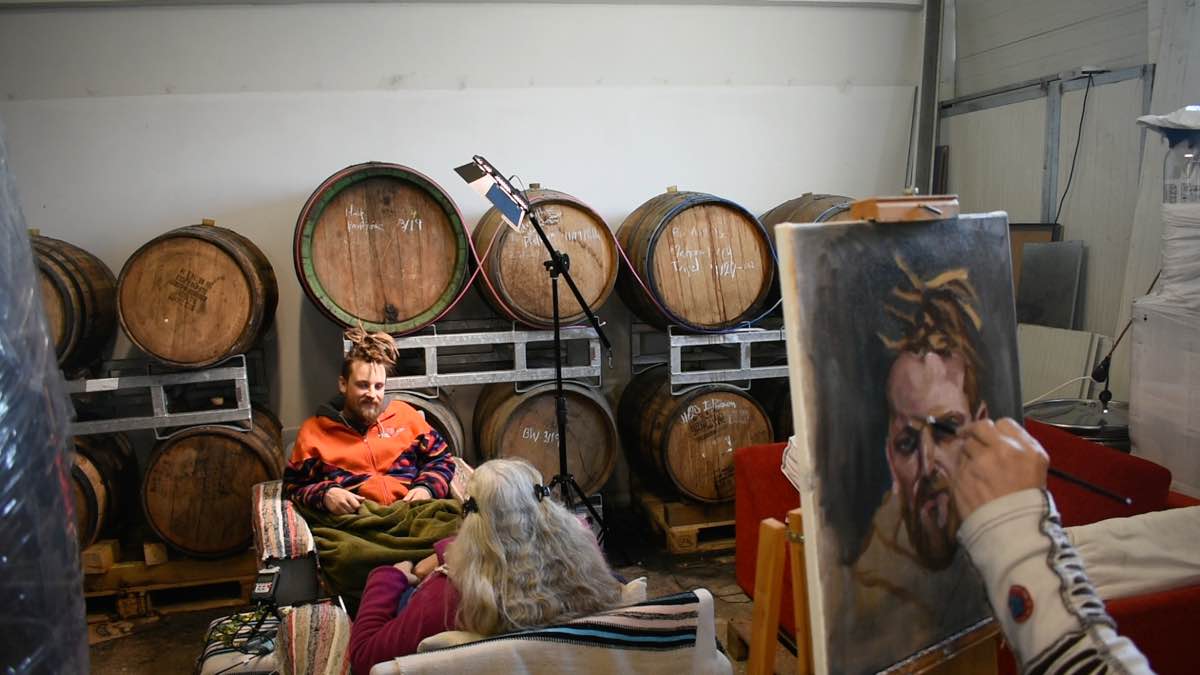 When we said goodbye, Kostas asked if anything had happened to make us leave. Everyone was so used to the sight of us and our constant presence that we somehow belonged to the brewery  scenery. Since we had also been given the keys on the second evening and had the trust of the brewery owners, our departure was somewhat unusual. We were all sad. But we promised to come back on the way back.

And there were always new friendships to cultivate, a little help with the beer production and to stand up to the harsh and icy winter together. We were repeatedly assured that there hadn’t been such a harsh winter in Patras for 25 years. Why did we have to catch this one in particular? No idea.

But what really got to our hearts was the tragic avalanche death of the 3 close friends of the bar owners. Vangelis and his partner Natasa followed the news during the search and rescue of the friends. It was terribly sad, as we had known one of the three for a short time. Life can end so quickly. All three friends were experienced mountaineers. On their way to go ice climbing, they were plunged into rocky precipices by an avalanche.

After the funeral services, Kostas invited all the mourners to the brewery for food and beer.

Today there is another celebration (without our presence) at the brewery to mark the end of the 40-day mourning period. Films and photos will be presented, which marked the time the friends spent together. They were all very intensively involved in the construction of the brewery and helped many hours of their free time without payment. Kostas is forever indebted to them. It was very important to him to celebrate this festival and express his gratitude. 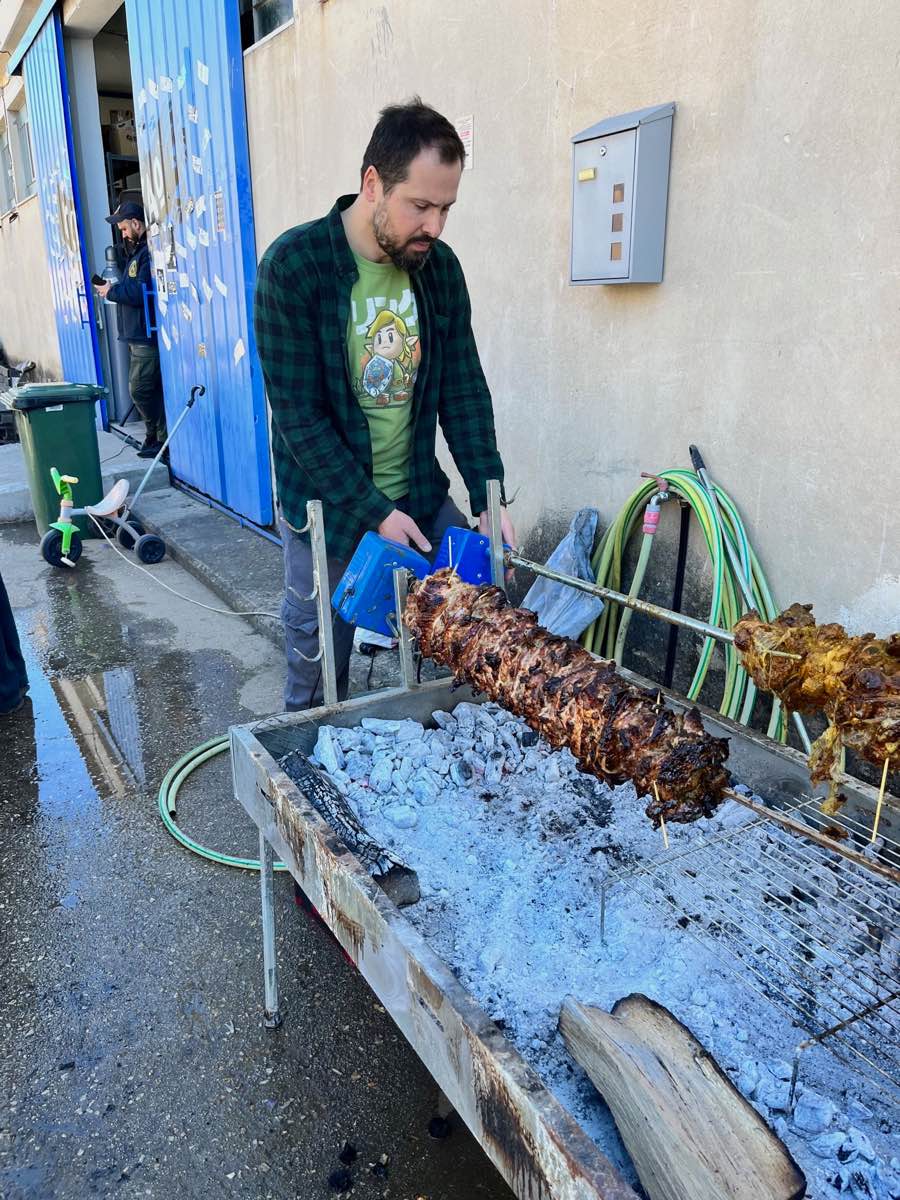 We were also able to take part in many other festivities during the Greek year. It was carnival and on Smoke Thursday, there is grilled meat everywhere. That’s also the case at the brewery. And everything is always free. At least the food. The kids dress up and luckily it was warm enough to celebrate outside. 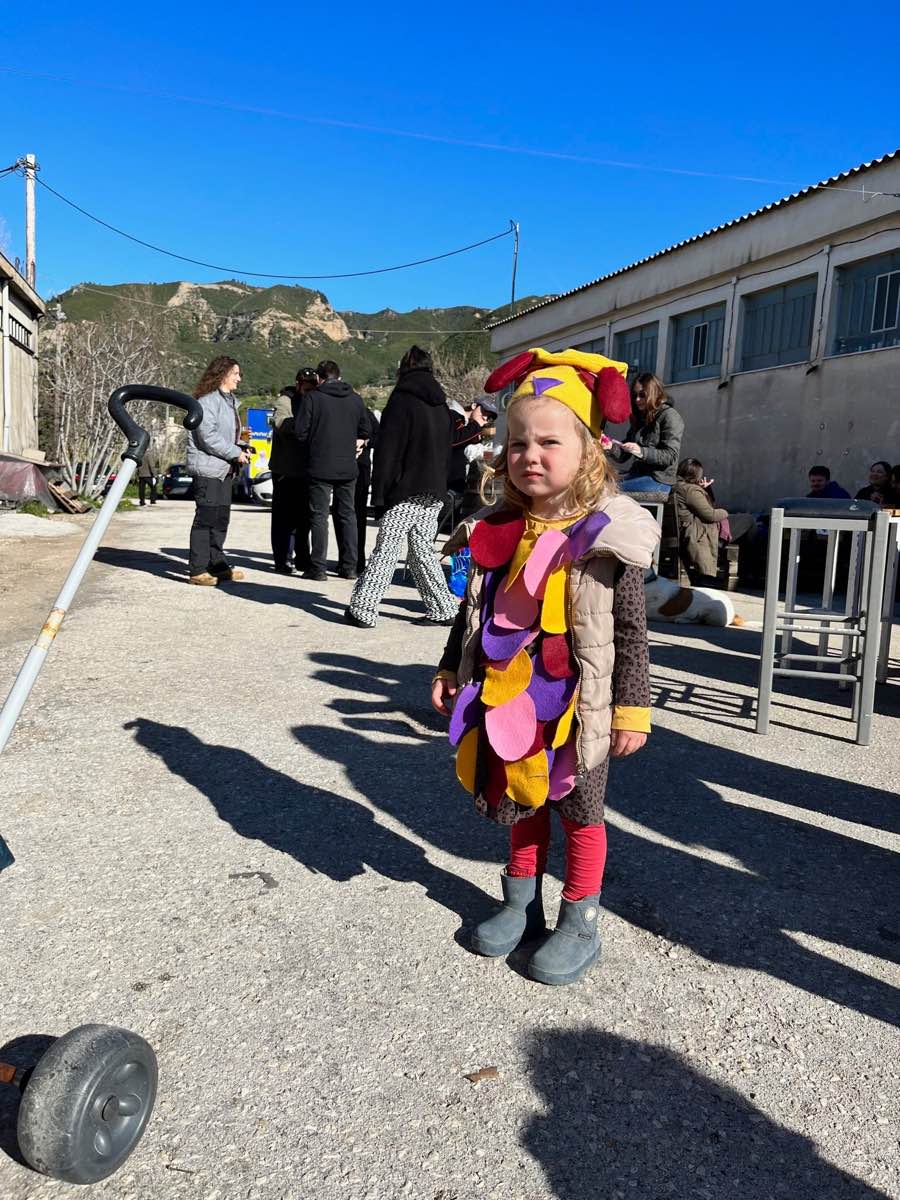 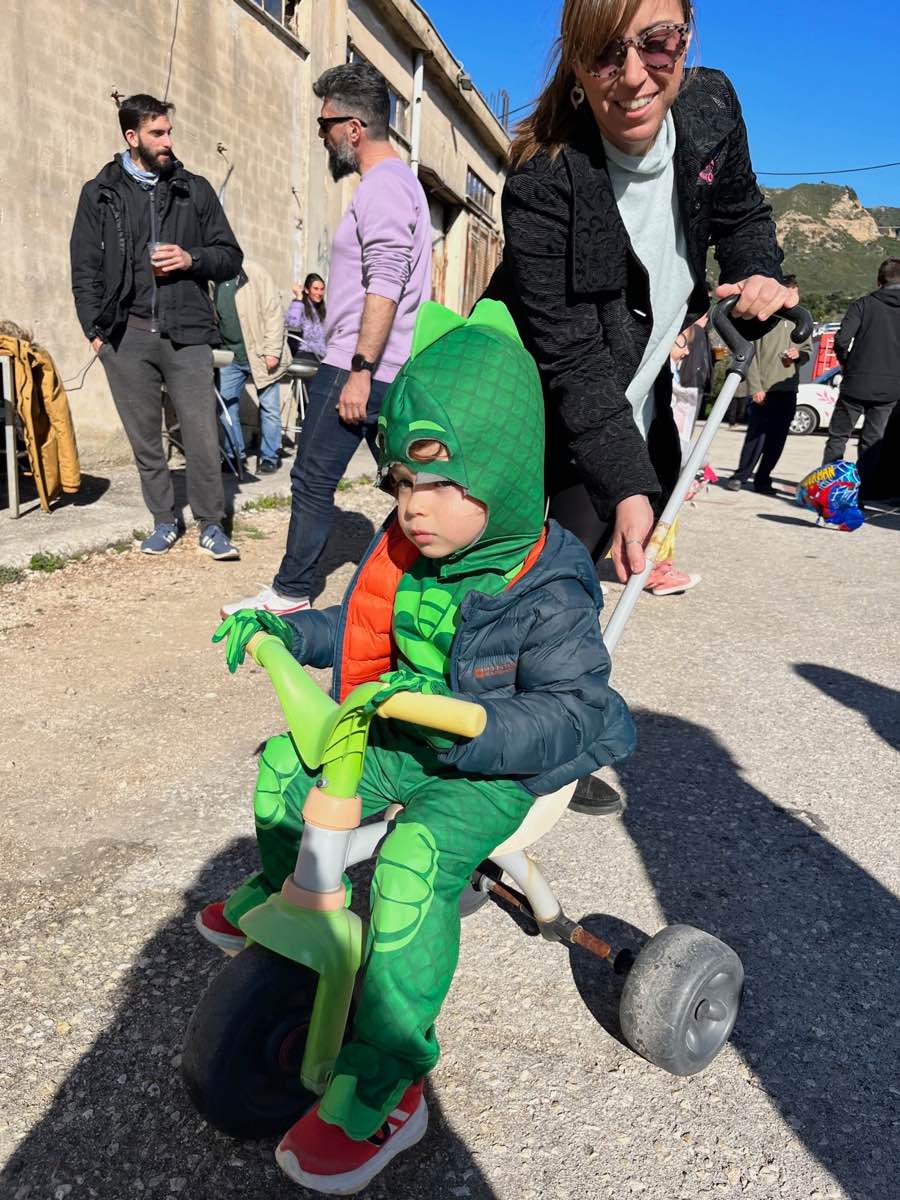 Dimitri offered to take us to Patras so we could see what’s going on in the big city. We were shown an “alternative” coffee house with a good view of the city. Next to it, there was an artists’ initiative that was working on the disguises for the carnival on big birds. Unfortunately, the appointment with one of the artists for a portrait did not materialise. 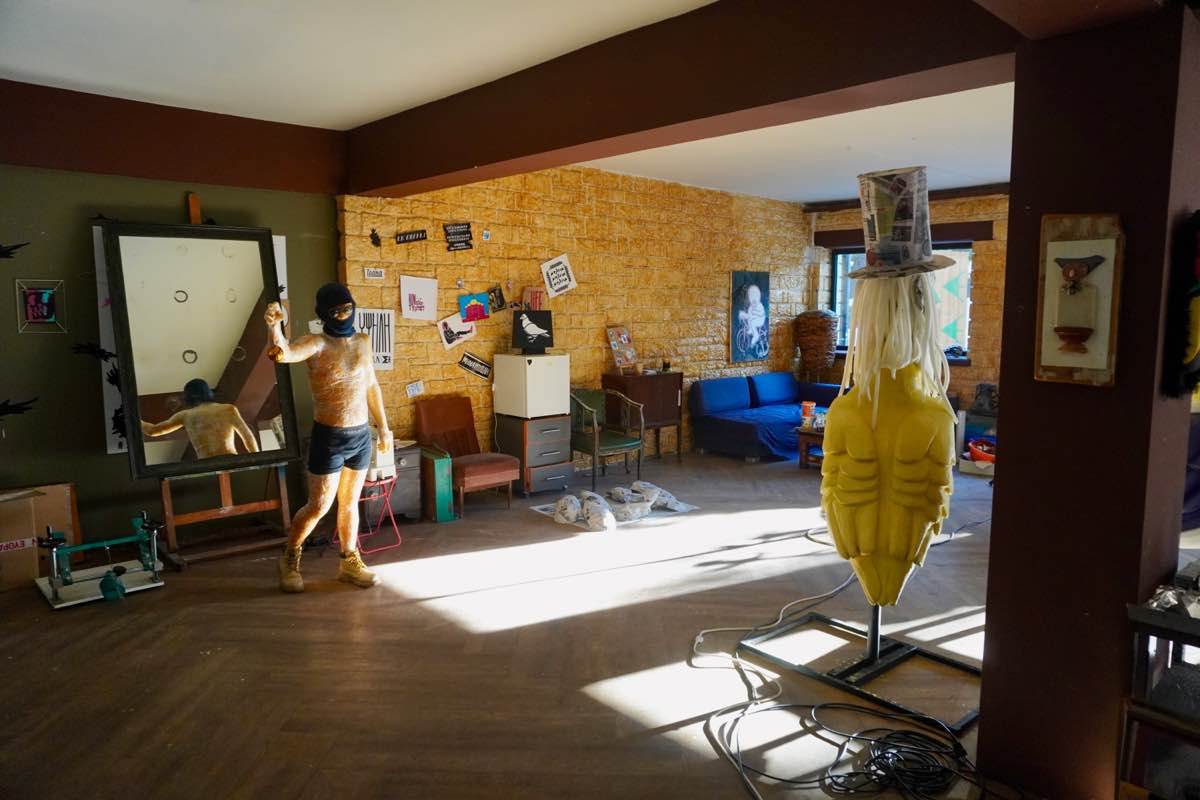 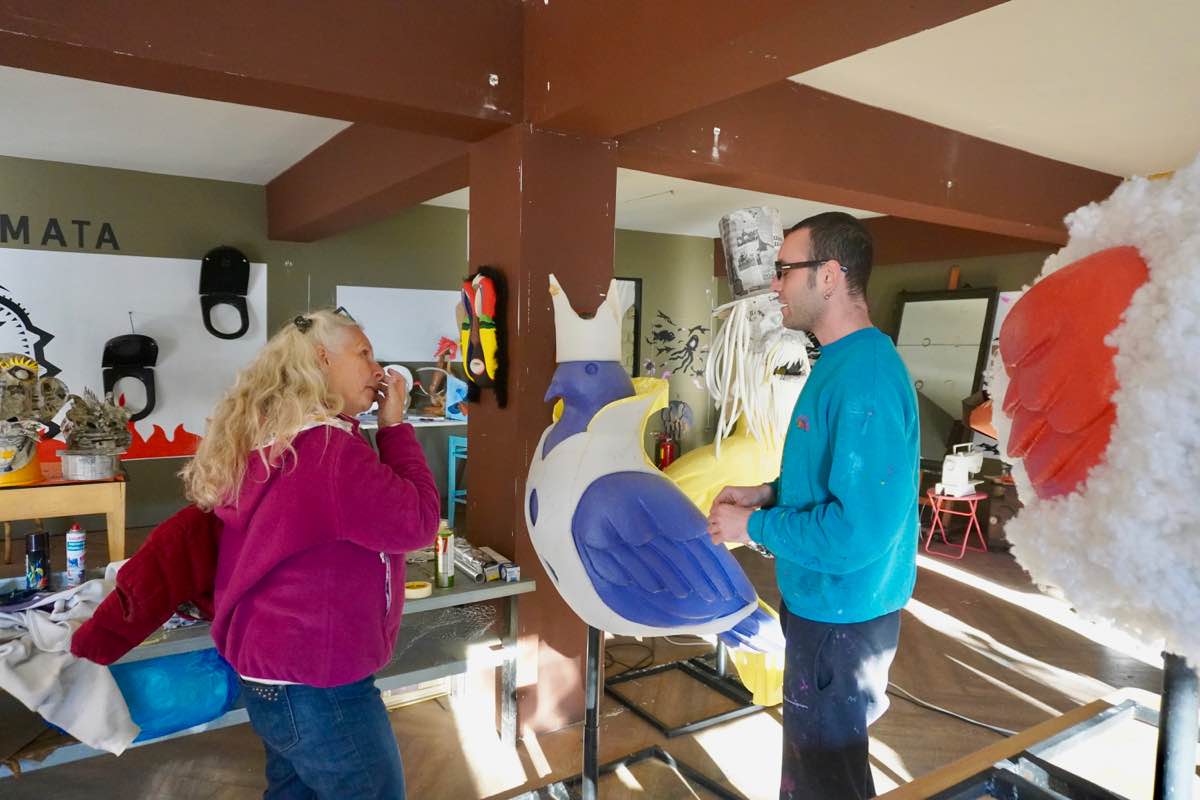 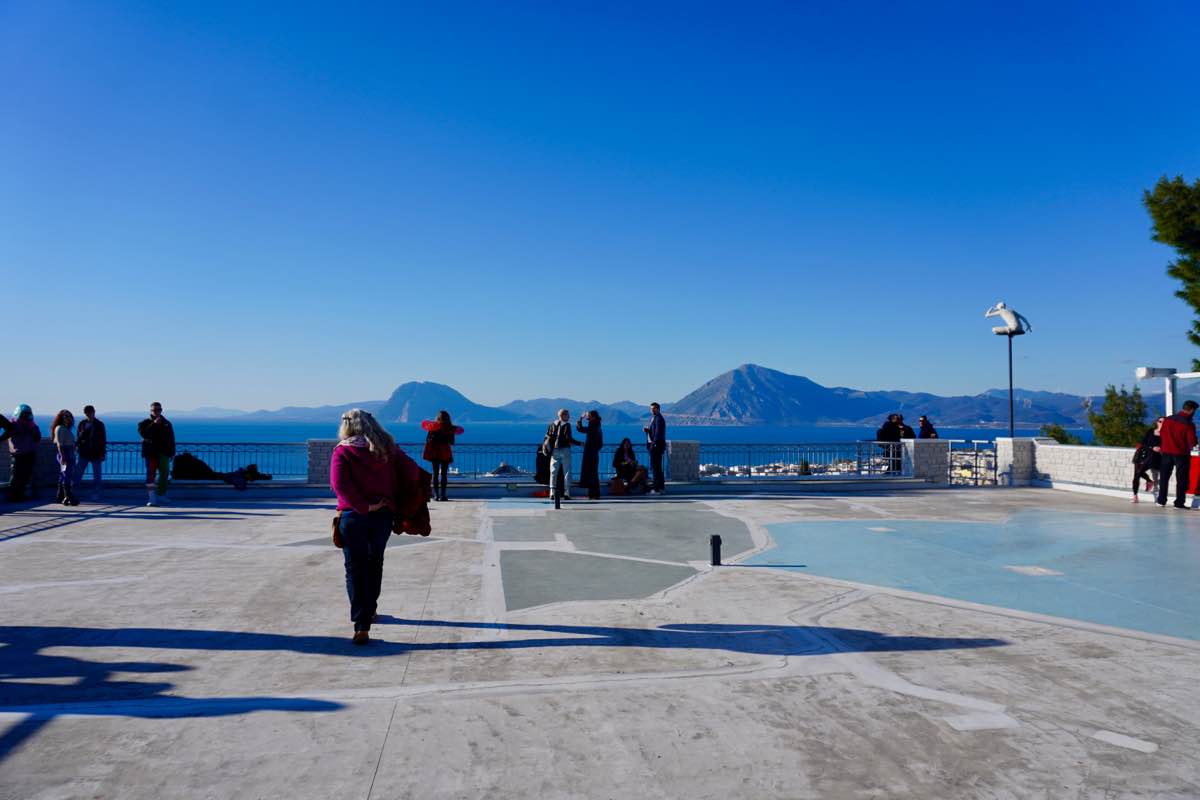 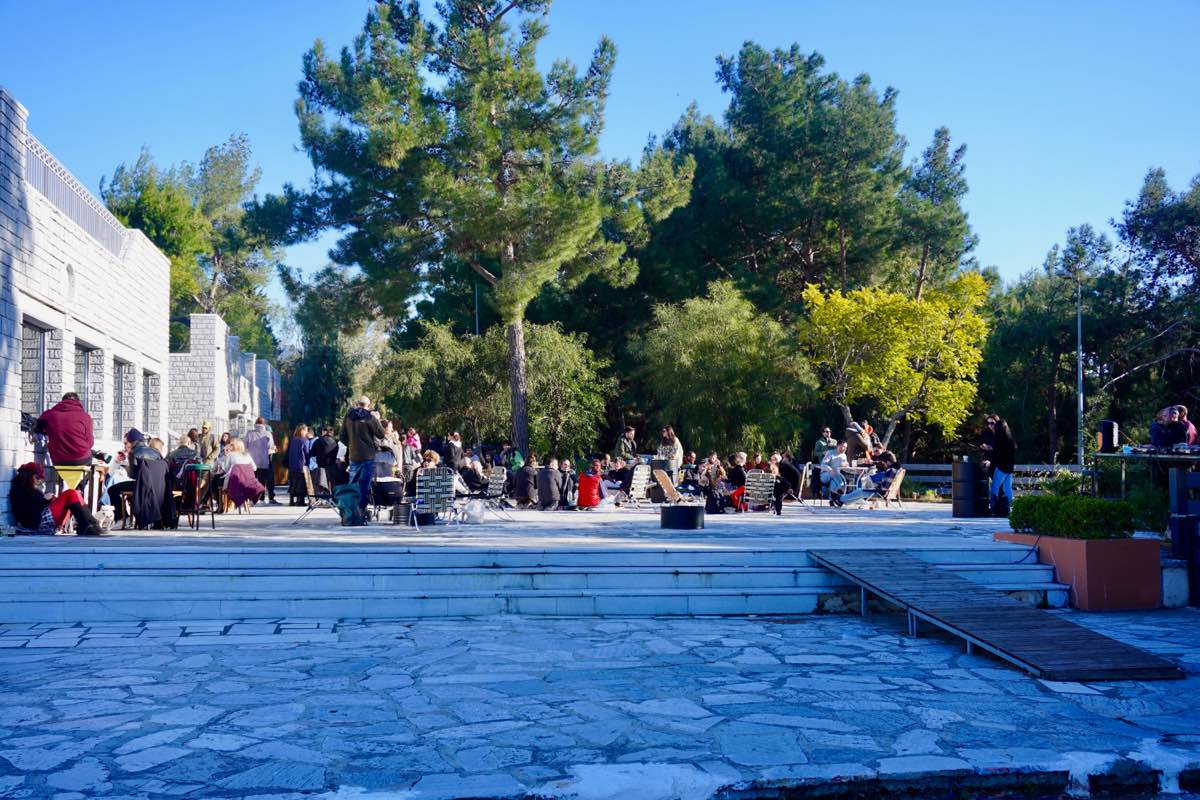 Laura, an Austrian artist whom we had also met in the brewery, took us home again.

Another family feast on „Cleaning Monday“ was celebrated one week later. Lyres and kids and food and dancing and playing. Greek people know how to celebrate! 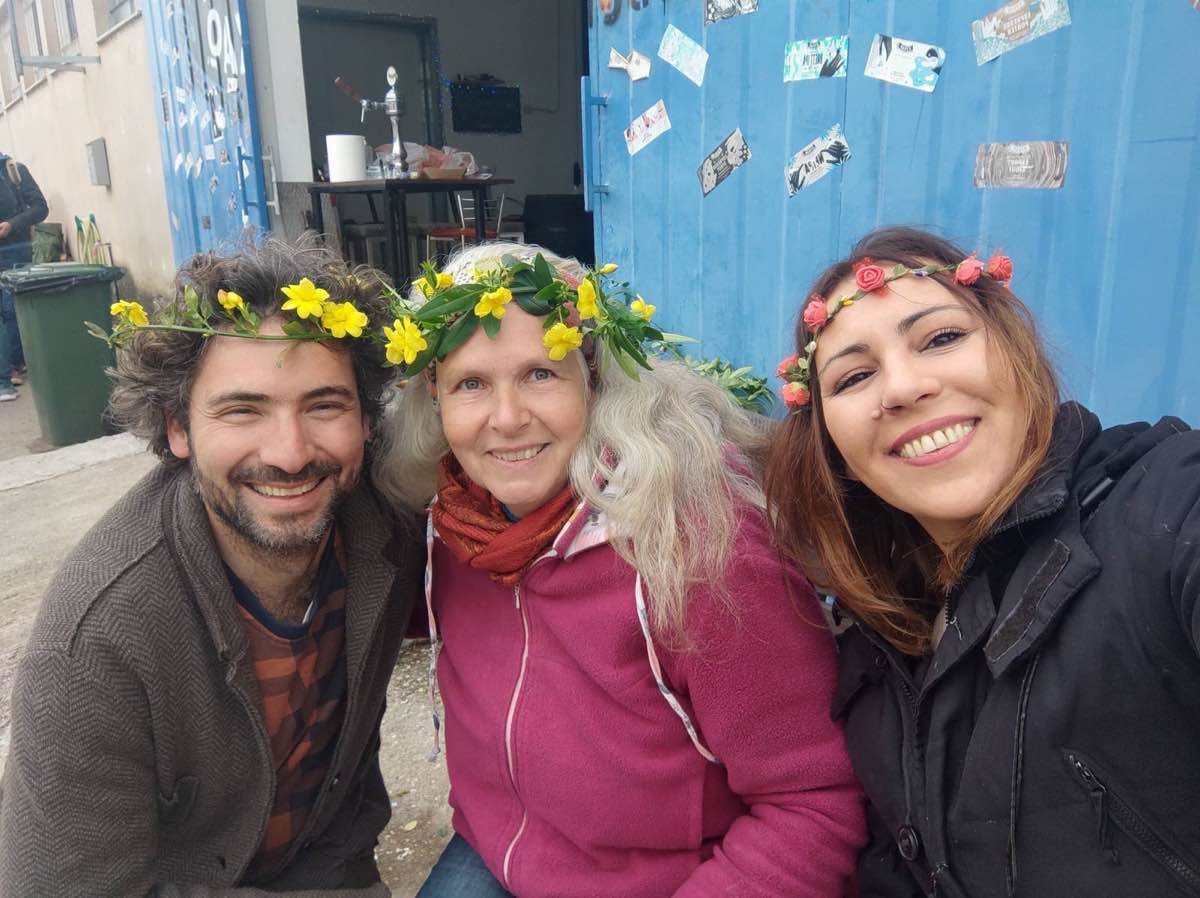 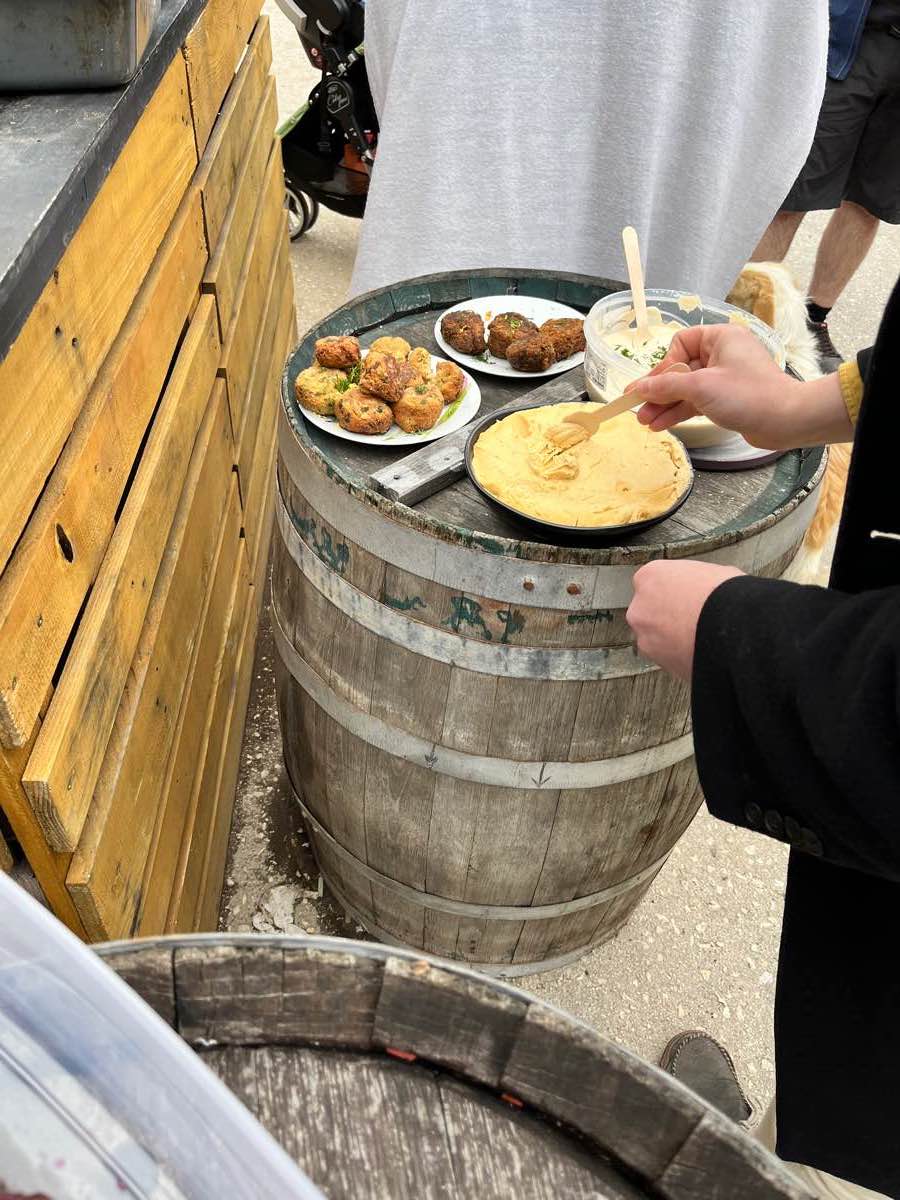 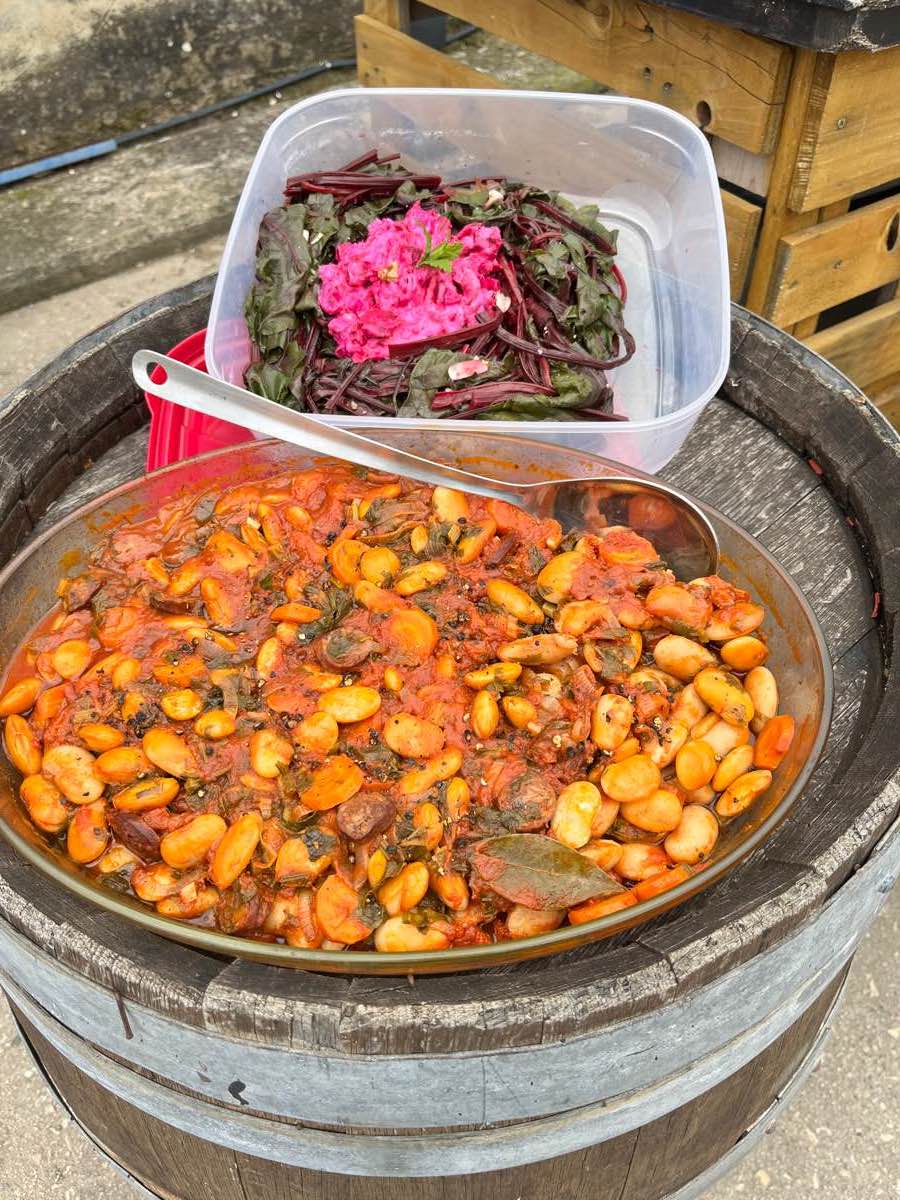 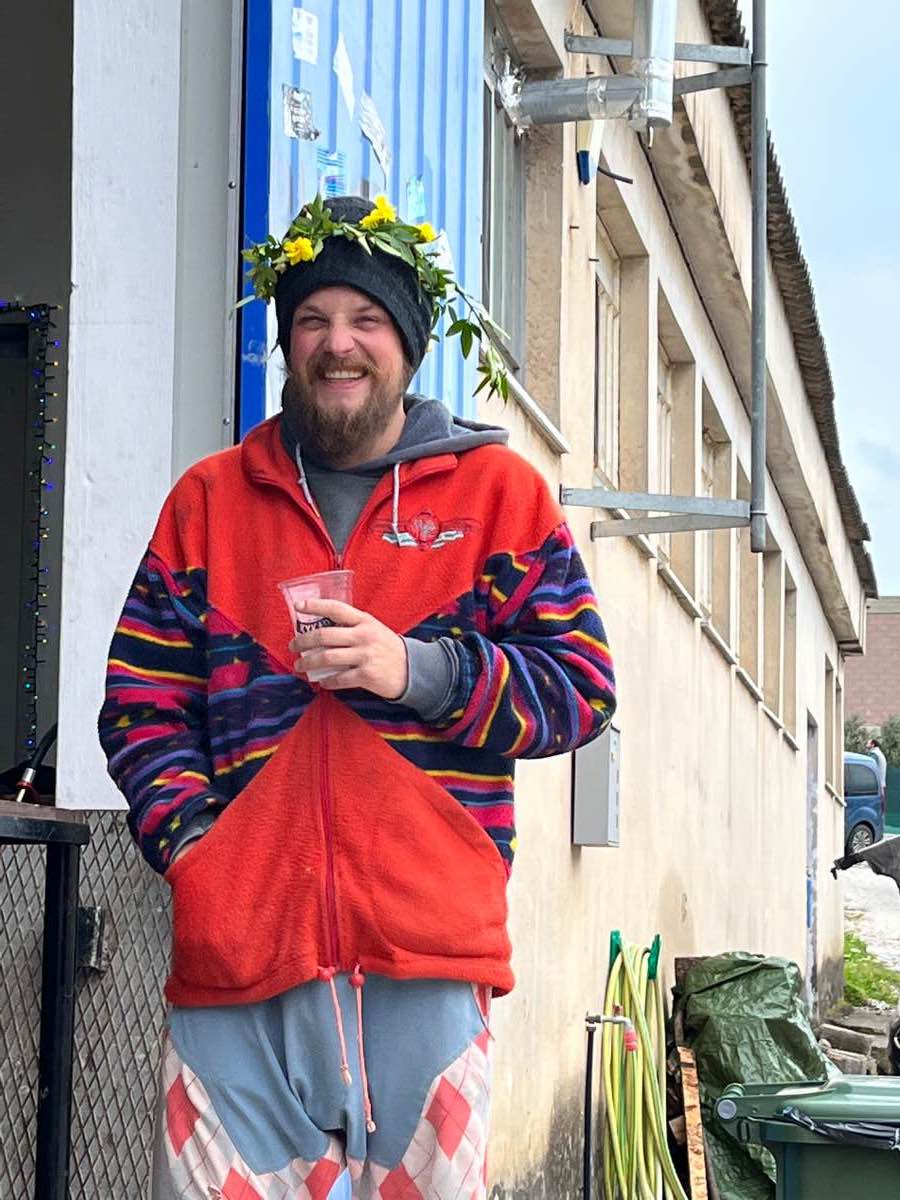 We met so many travellers from many countries. Some stayed only for a short time, others who had been travelling for a longer time stayed with us for some time: France, Switzerland, Germany, Poland, the Netherlands, the Czech Republic were represented. Of course, Germany was represented the most. At least that’s what it felt like. Well, Maxi and Stefan and Bene and Ella were together with us the longest.

Yesterday, after we had finally torn ourselves away with a heavy heart, we wanted to stock up on food. When we got to the car, we were horrified and speechless. The car had been broken into. At first it looked like the laptop and all the removable hard drives with all the memories were gone. Then Wilfried found everything intact in the driver’s seat. The burglar must have got out of the car as soon as we arrived. What a relief. How could we have been so careless? Only one of us ever goes shopping. The fact that we were standing so safely at the brewery, not even having to lock the doors at night, probably made us a bit too safe. 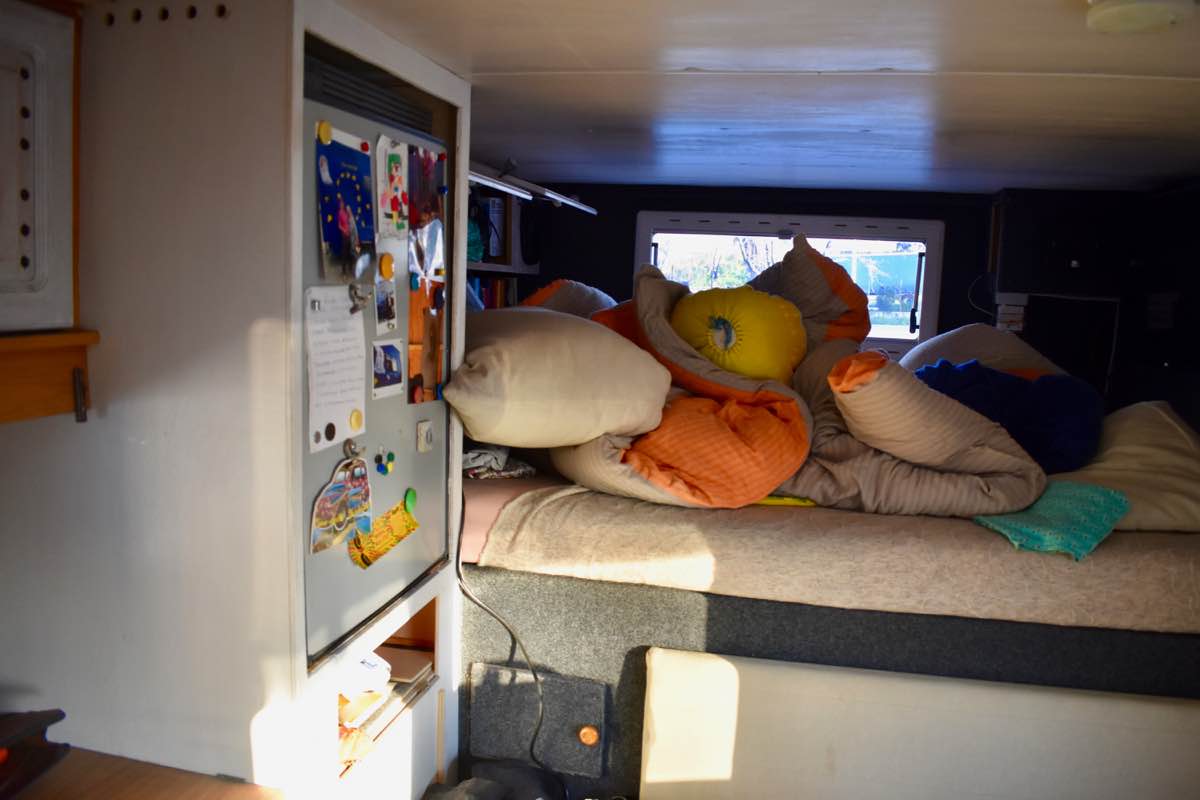 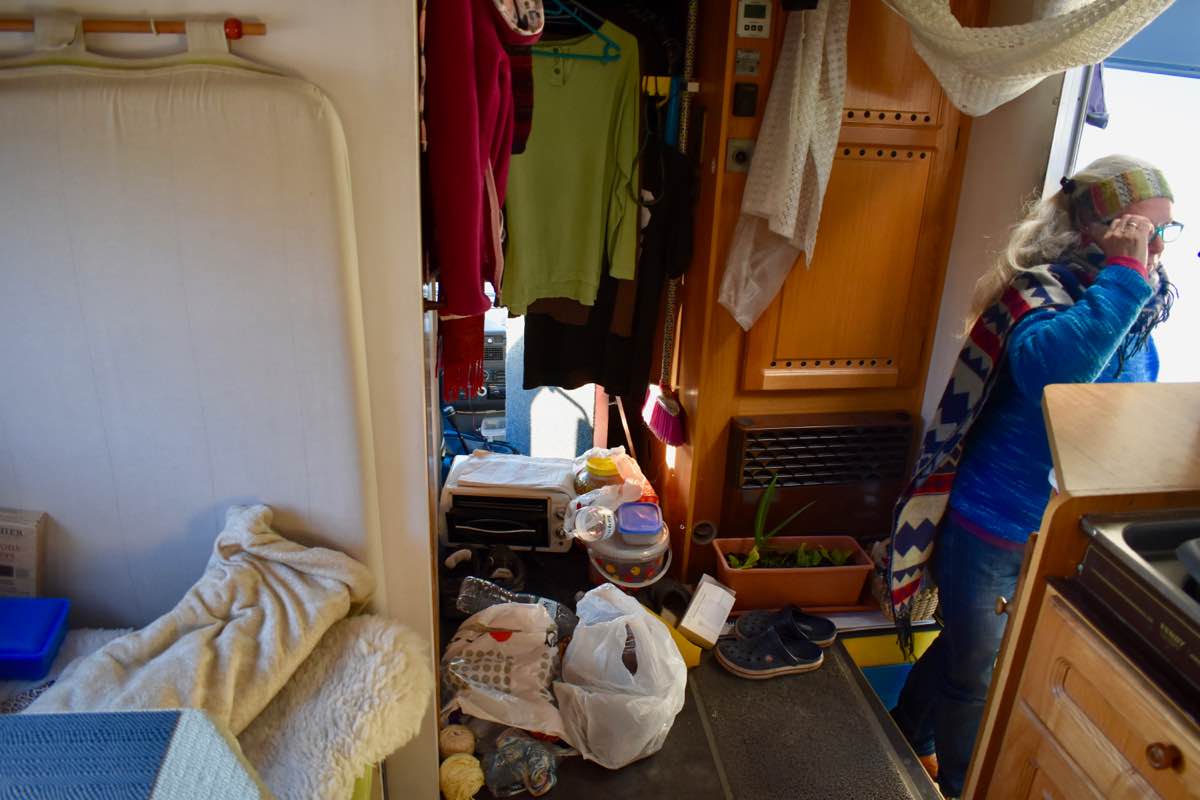 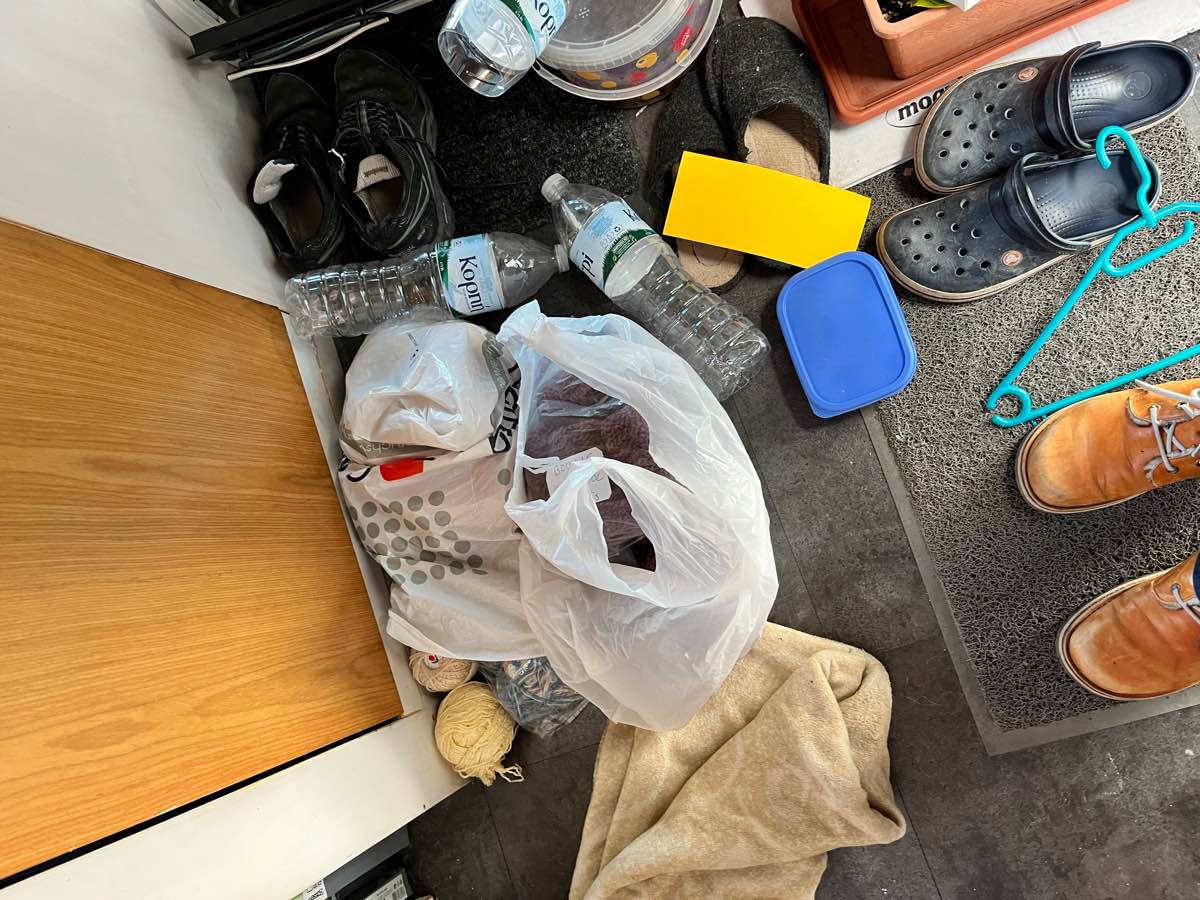 So in future it’s back to only one leaving the car to shop.

And when we both leave the car, all the stuff of value gets dragged along. Full stop. That’s the way it has to be. All the work of months would have been in vain. Our relief when Wilfried found the laptop bag with its contents intact was enormous.

We are very concerned about the war in Ukraine. It is the most dangerous situation we are in at the moment since Chernobyl and Corona. What does this mean for our lives, for our project and for the whole world?

Let us pray together for peace!

I have never felt so close to a third world war and I assume many people feel the same.