Since 22 October, we are back home.

The trip through France (where Pompes funebres is not a bad word), Germany and Austria was a slow one for our Big Fredi.

No more than 80 km/h. Immediately after the ferry at Dunkirk there was a pitch that only had to serve to sleep. And Lisbeth could do so. Quiet, no music and only Wilfried heard the noise of the cars. Lisbeth is blessed either by filtering the noise or by being deaf. Like a sleeping doll that once it is laid down, her eyes close and she immediately falls asleep.

The next morning a call at ÖAMTC helped us to find the nearest Iveco service station. We found it 15 km away and close to Calais. The noise which was heard by Wilfried so clearly could not be heared by the slightly older car mechanic. He probably was also blessed with weak hearing. But at least it was determined that the bearing on the right front wheel was in order. We should just not drive too fast, and when the wheel is hot, respond immediately. Since we are not French speaking people, and the French people could not speak English or German, a piece of paper and pencil helped to illustrate that there are  yet 1.500 km to go home to Austria. A French shrug, which means as much as: nothing will happen, just drive slowly and then  exactly at 12:00 the workshop scroll bar for lunch was lowered and we were on our way home.

The French national roads led us partly through rural areas between „extinct villages“ and small towns who reminded us much of English architecture. The brick houses in beige or red were here and there interrupted by half-timbered houses. No such uniform style as in UK. 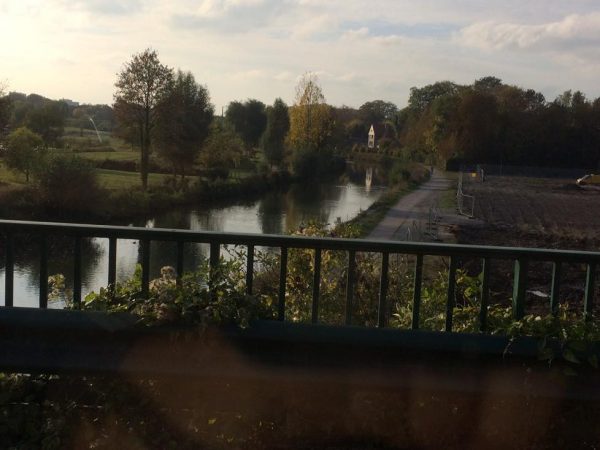 At a parking lot, which we had all to ourselves there was a beautiful sunset. The sunrise next morning was behind a dense forest. Otherwise we felt at 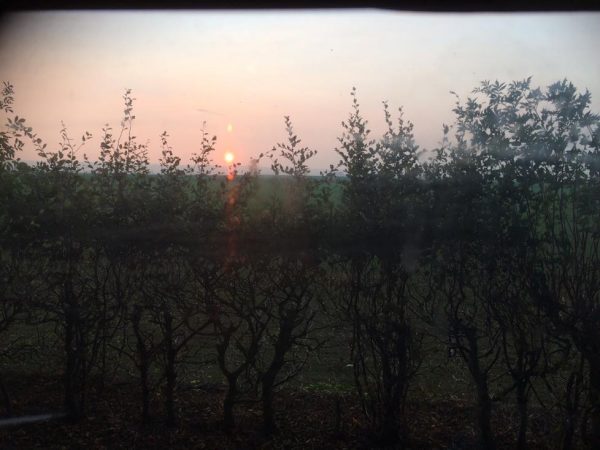 once so free and unrestricted in our view. Finally NO HEDGES any more. One can see the landscape everywhere. It’s a wonder the English are so friendly and gracious, boxed in as they are. And it is amazing that they love their country like that. They cannot see their country from the road! Everything is always hidden behind a hedge. Entrances into the fields (behind the hedges) always give brief glimpse into the landscape.

In Germany Diesel is much cheaper than in France. Therefore we tried to get into Germany as fast as possible. In Saarbruecken we met heavy traffic and construction sites, which demanded a lot of concentration. We had already poured 30-liters of Diesel from our spare tank into thirsty Big Fredi but the price of diesel near the French border also was not cheap.

Slowly we moved on through Germany, always on the main roads avoiding any Autobahn, but they were at least in good condition and were often interrupted by expressways. In Maulbronn our app found a „free of cost parking space“. The next morning the monastery Maulbronn attracted us magically. 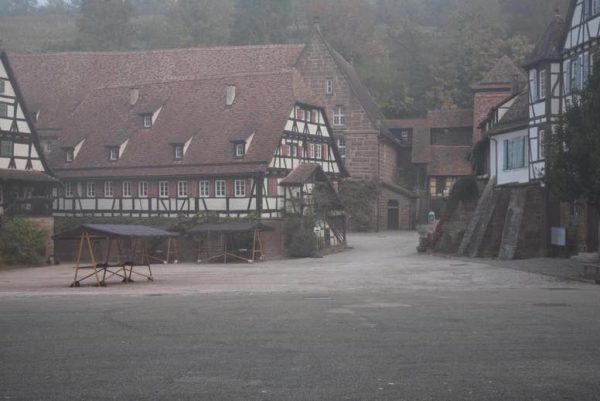 We just had to take a guided tour. Armed with one audio guide each, we explored the old walls. There we would like to be with Face Europe in the courtyard. There is plenty of room and even the „fat“ Fredi would have enough space. When we go back to Germany, we will contact the management and ask for a space there. 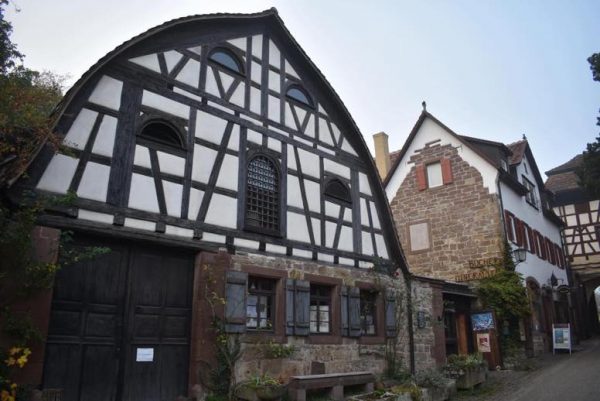 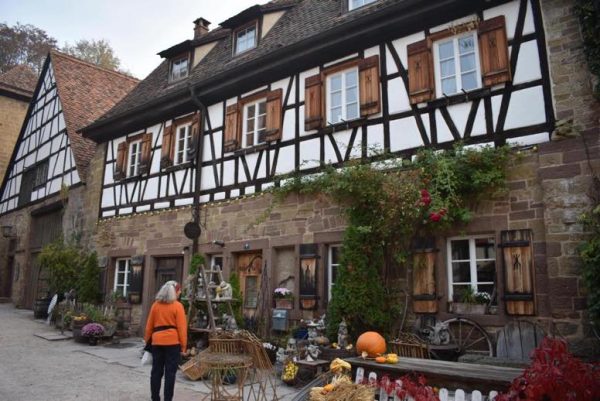 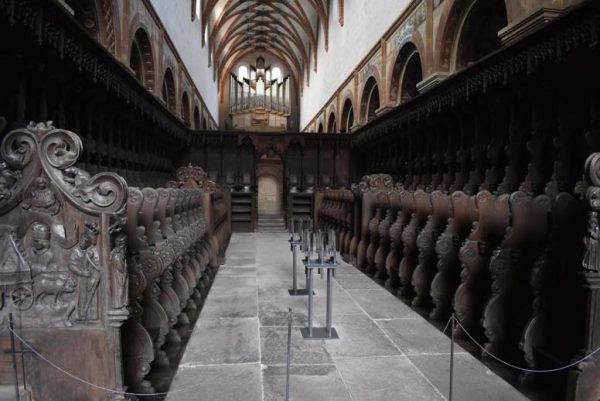 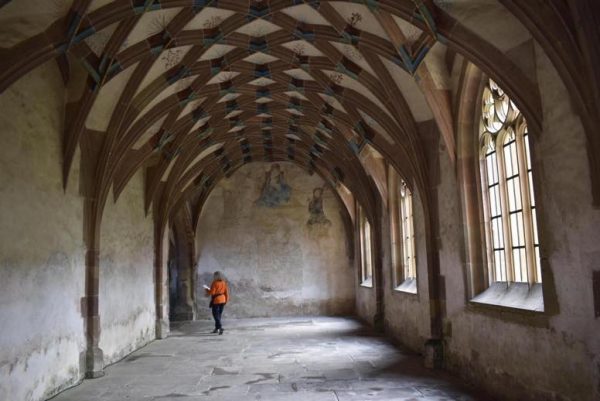 At noon we moved on again. Our next camp was then in Neuburg an der Donau when we learned through our adorable neighbours that the whole evening and half the night a street party is announced: “30 years of our German Danube”. It was a mild evening and extremely busy. Theatre, stilt walkers, canoe propelled handball players who paddled very skillfully while playing ball. The castle was freely accessible and there were everywhere actions of artists at a high level. To have two cultural highlights a day was very exciting. It was just a pity that the theatre and music groups were set up far away from the castle and had very few visitors.

Right on the banks of the Danube on a huge official parking space for campers we spent another quiet night. The next night should already be in Austria with our friends. Wilfried kept Lisbeth from announcing our arrival at our friends too early in Innerschwand am Mondsee. He was not sure when we could be there. And that was fine like that. The federal highway 20 had been diverted towards the Austrian border and was a complete disaster area. There were 50 km poorly signposted diversions, our stubborn Navi which wanted to bring us back again and again to the 20 highway. The road map could not be consulted, the scale showed only the larger towns. And we circled. When hunger and desperation were large enough, we decided to cook and eat. When we had parked the car we asked a local if we were still on the right path he redirected us back 20 km. But when we were about to take off and follow his directions, the man came back and told us he was wrong and he had to come back to tell us the proper way. That was very kind of him. In order to escape Germany we had to use the Autobahn, which we wanted to avoid, but we took the risk and continued without further incident. David was very surprised about our imminent turning up, next time he would like to know sooner that we come. He learned only after our arrival about our awful diversion experience. You just never know big Fredi’s mood and which incidents can occur before you really reach a goal.

This night was the first frosty night, and just then we ran out of   gas for the heating in the morning at 4:00 am. Wilfried would have had to hook a new gas bottle, if we wanted to continue to heat. Somehow we survived without heating and the sun and the hospitality of Sonja and David quickly warmed us.

Packed with gifts from Sonja (freshly baked delicious bread, jams and compotes) we took the last part of our journey and at 4:00 pm we reached home.