It is again quite cold

The journey from Santa Pau was very romantic.

We climbed the first few hours on a winding road, the map showed a “Scenic Route”. As we reached the plateau, we saw the landscape disappear beneath us like an ocean of dense fog. The bad thing about it is that soon we had to dive into the same mist and beautiful sunlight in the solar system was gone for some time. Until later the fog everywhere else dissolved. 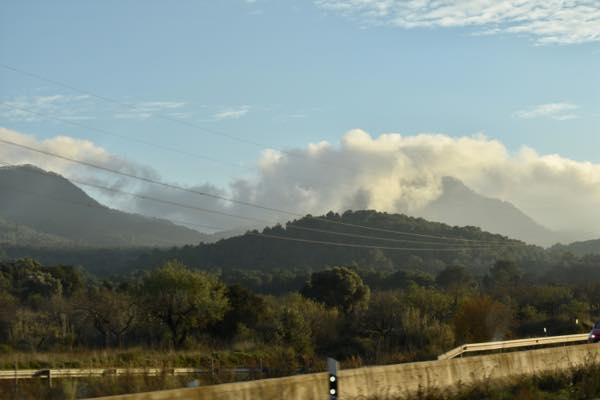 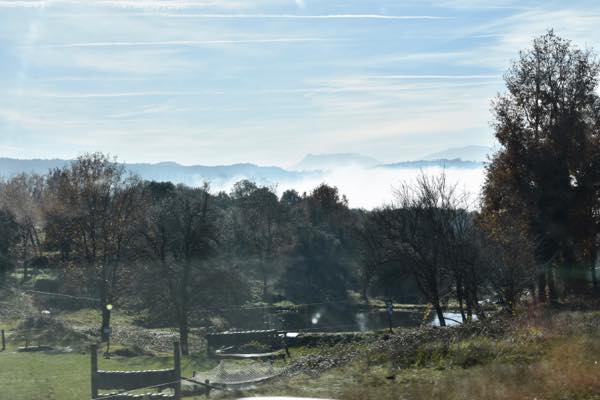 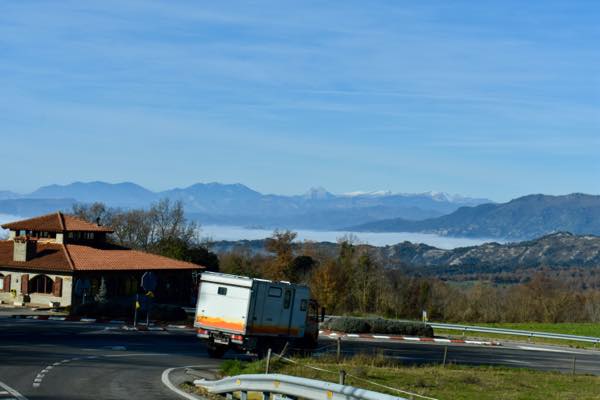 and the coin laundry for Petra and Lisbeth. Petra has found both on the Internet to be in Tarrega.

We walk or rather drive different ways: Dieter remains on the outskirts waiting for the oil change at 5 p.m. with his “chameleon” while Petra together with her dirty laundry goes into Big Fredi and we women enjoy ourselves  at the laundromat. As our garments certainly not bite each other in the machine, we decide to put the stuff together on each of a machine with 18 kg and 13 kg (once 60 degrees and one 40 degrees) and after 30 minutes our complete laundry is washed. Another 30 minutes in two huge drying machines and we drag the finished washed clothes back to the car which is only a few steps back, where Wilfried is waiting in deep concern for us. The concern is not our washing procedure, no, he has forgotten to bring the gas bottle adapter for Spain at home. And  – as it is written on the Internet in the forums that it is absolutely impossible to get anything like this in all of Spain. Petra and Lisbeth leave the emotions aside (anger, resentment, …) and come up with a pragmatic decision: how to get the adapter from Austria and to whom we could send it and who could do that for us. As it should go quickly – before namely our second Austrian gas cylinder is also running down – we call Michaela at home in Nussdorf and ask her for help. She could check the next morning during daylight if she could find the adapter. She is quite nervous because of many duties with her parents and right away we regret to have asked her. Lisbeth finds another solution the same evening: there is a camping accessories shop near Tarragona, which has, according to Internet exactly this adapter in stock.

Wilfried has prepared a delicious supper – while the women had sorted out and cabinet folded the laundry.  This was also enough for Petra and Dieter.

At night at temperatures just above zero the heater failed completely. The reason for the complete failure in the heating system might be the regulator, because there simply is not enough gas in the pipe. Dieter has a spare regulator in the car, which is only for 30 instead for 50 millibars. For now the problem is solved. Lisbeth has put on seven layers, her fur shoes and her headband but standing outside during the solving of the gas problem in the morning has made her stiff of freeze in cold weather. Only after a long time she thaws in the car and really warm, it is only in Tarragona, in front of the camping shop. Full of hope we go to the entrance: Closed for inventory. Wilfried sees many people in business, who are eagerly counting goods. Lisbeth, who does not want to give up so quickly tries from behind the closed store to find an entrance. As a woman comes out of the business she explains that today is closed. Lisbeth begs that this is an emergency and we would freeze to death(Dieter gave her the tip: emergency !!!) and the lady really served us. We get a pressure regulator and the adapter for the Spanish gas cylinder. It is like a big gift for us. We are very grateful to buy both at even a great price.

Several gas station stops later and an hour after Dieter and Petra we arrive at the camper stop in Onda near Villarreal. It is a great parking space again and there we will wait for the rain tomorrow.