The past days of the trip were quite intense, at least as far as driving was concerned

Therefore chronologically – as far as afterwards comprehensible – our stations:

10.10.2019: via the N88, which is a toll-free motorway, to Villefrange. Washing laundry went super at Netto, where after 1.5 hours everything was ready to go again. After a long search we found a place that is NOT in the Park4night App. It was the parking lot of the football stadium in Maleville. That’s why we stayed there alone and spent a quiet night. The waist containers at the other end of the field were visited until late into the night and early in the morning lively by the villagers.

Was that a flimsy excuse to see Big Fredi? We don’t know.

Our Navigation aunt has found again super side roads and has sent us for 150 km a whole day in the area around. We came to Tournon d’Aganais, where we found a parking place at the foot of the village. 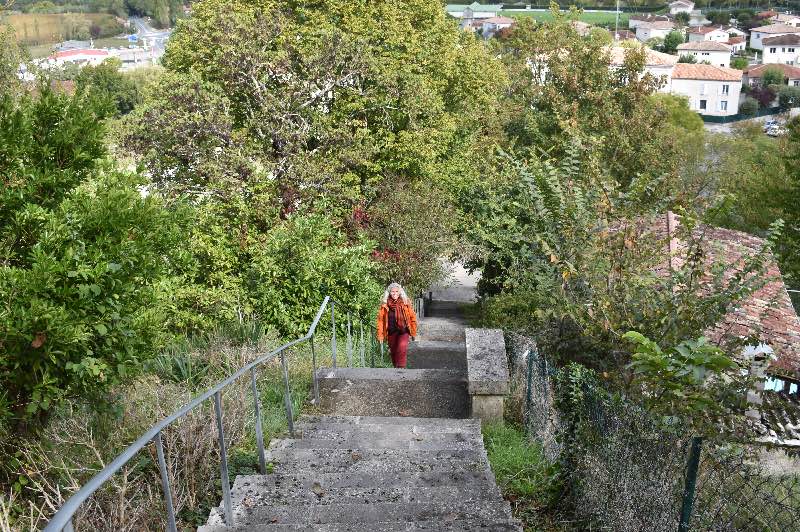 And it was really the foot. At least 200 m we booted up the steps into a sleepy medieval town. 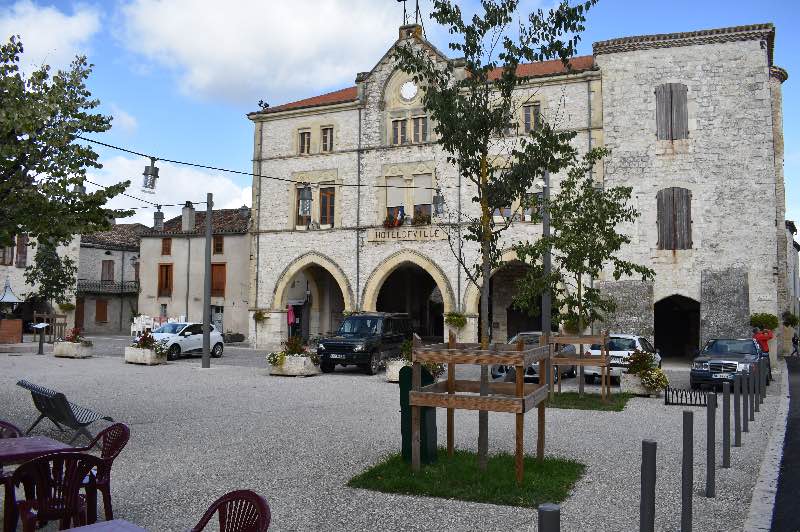 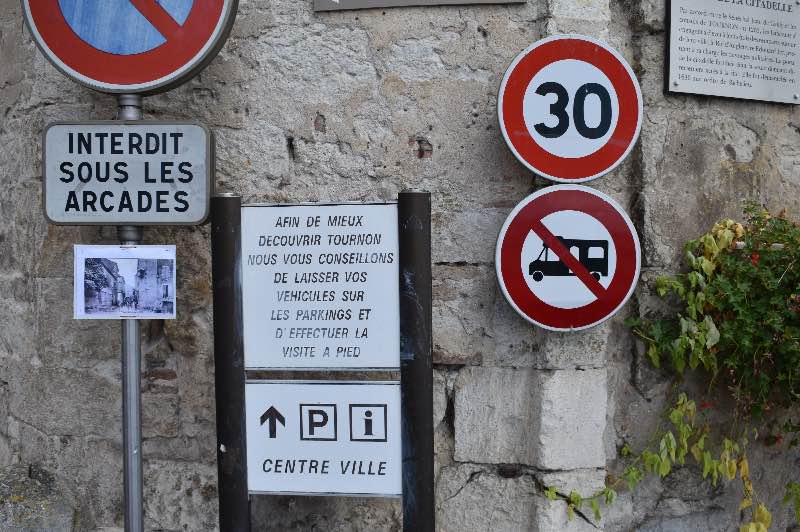 Hardly a human soul, no bakery or any speciality struck us. Nevertheless, the view from above into the vastness of the landscape was very beautiful. 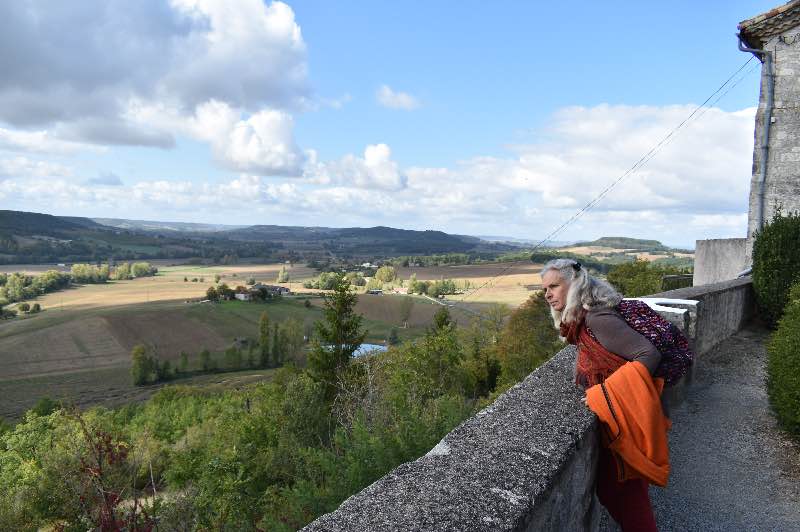 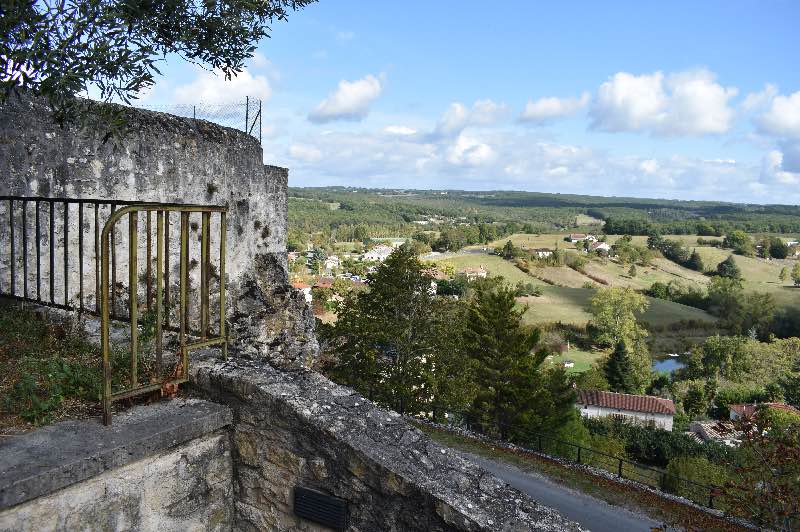 Through the nature reserve Cascogne over roads, which are only thin lines on the map, we stalked ourselves to the Atlantic coast. 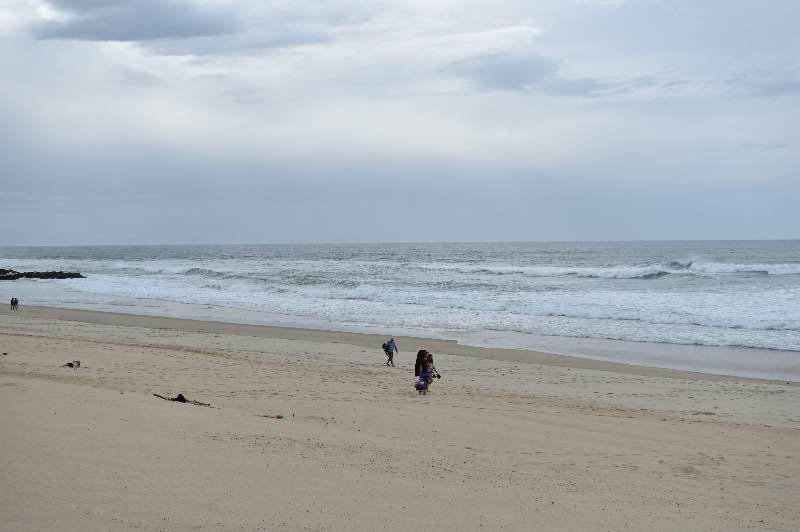 Florian, whom we had met in Portugal in the spring, said that he didn’t have time for us on the weekend, because he must have cleared his place at the campsite by Sunday 17 o’clock at the latest. We stayed in Vieux-Boucau in the forest after we had convinced ourselves of the place and didn’t like it there at all. A tourist place in winter mode. 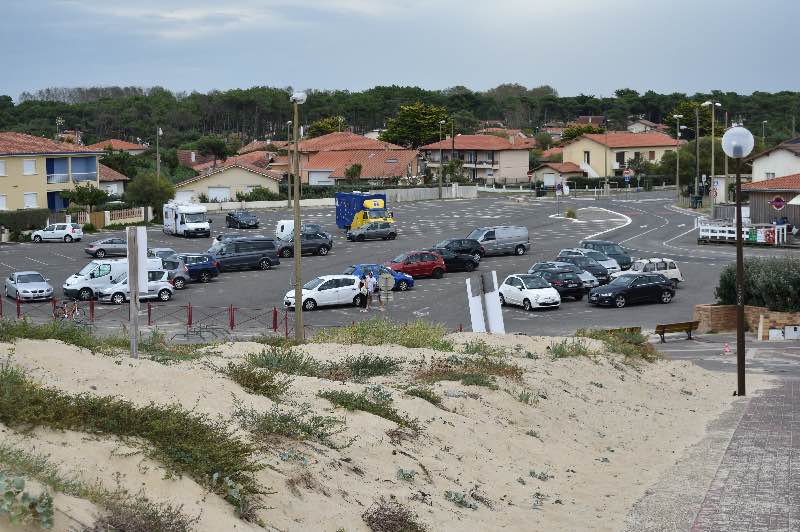 The weather became unbearably humid and we stayed a 2nd night in the forest.

was even extremely hot with over 30 degrees. I couldn’t get through to a walk until the evening. This led me at least to the sea, where some surfers were still cavorting. Since it was already dawning, I took no more time to go to the water and to test the temperature. We decided to leave France. Nobody had approached us about our project in the last weeks and no place seemed suitable to us to advertise Face Europe.

Monday, 14.10.2019 early we left with the dull feeling in our stomach that we had to drive through this terrible area from Biaritz to the Spanish border. We knew the area from our last trip home in spring. Wilfried fought his way bravely over the highways, 1000 roundabouts and masses of cars and trucks.

Somewhere south of Orio we discovered a supposedly beautiful parking lot on the banks of the river Urola in the Park4night App. Neither the praised peace nor the free water well were available. It was a parking lot in the city. While driving on I discovered a mobile home company, which had open. I courageously walked in, inquired whether there was a water point nearby and got free water from the workshop. Zarautz was recommended to us to spend the night there. Again it was Wilfried too loud, too dirty and too unsafe. He found a place in 7 km distance, which turned out to be a serpentine road of 15 km and a small bulge on the way. 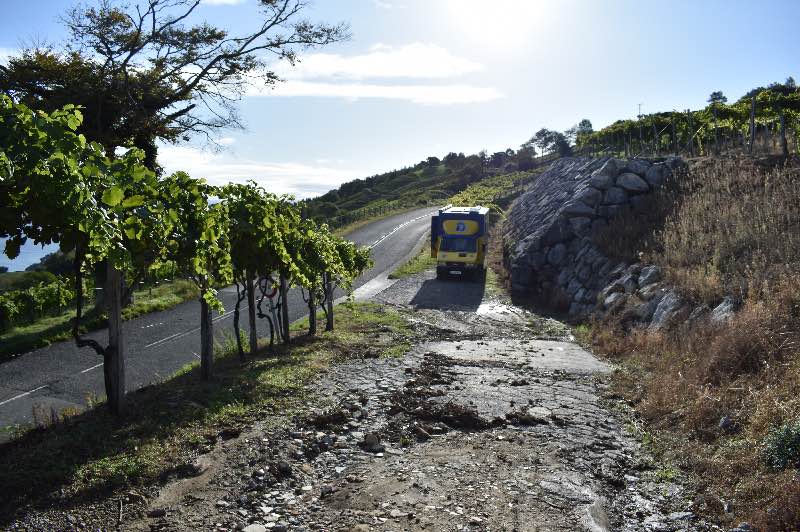 We took this place into our own hands and did not obstruct the traffic in the meadow. It rained and was dark. Down in the valley the town of Getaria lay by the sea, brightly lit and beautiful.

The next morning everything in the sunshine didn’t look so scary for me anymore and we drove the last serpentines to the coastal road. 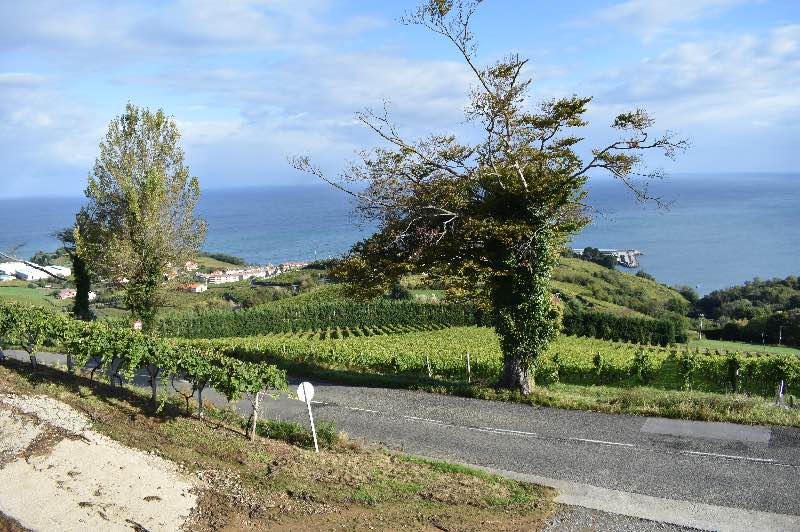 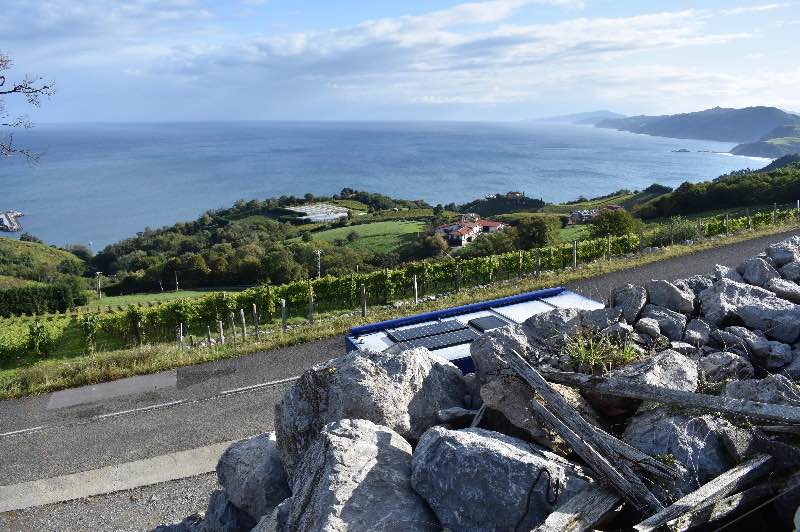 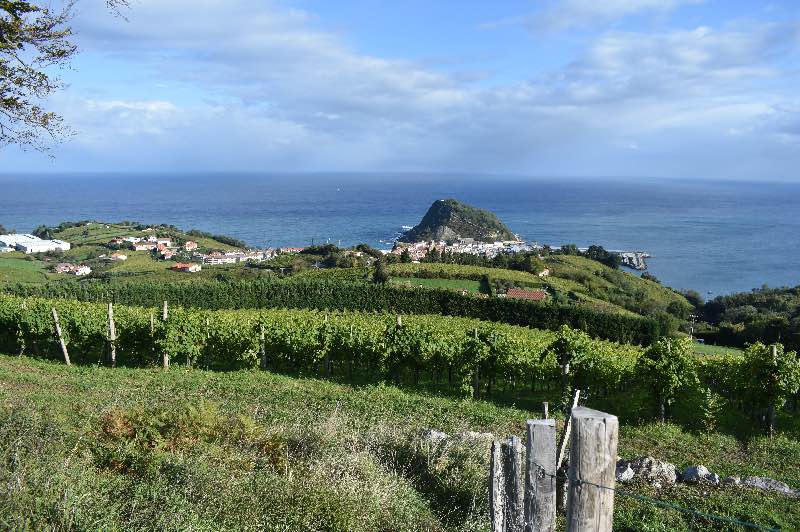 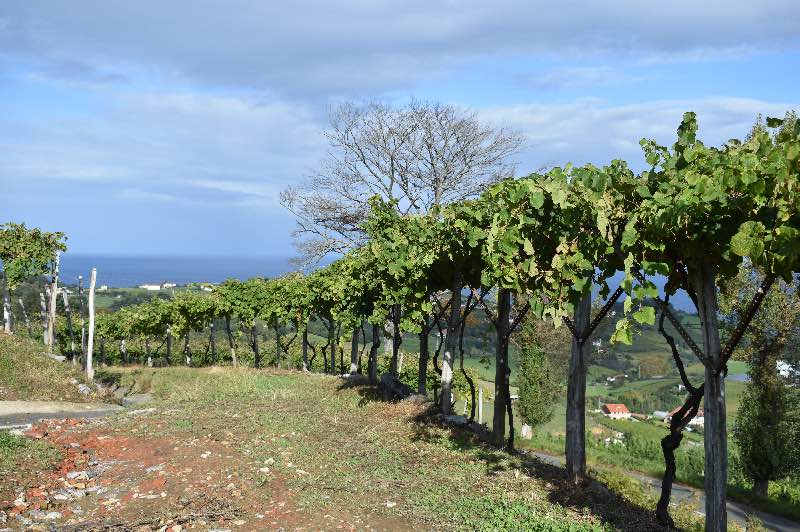 Construction sites on the narrow road led again and again to alternating traffic stops and traffic lights on the route. 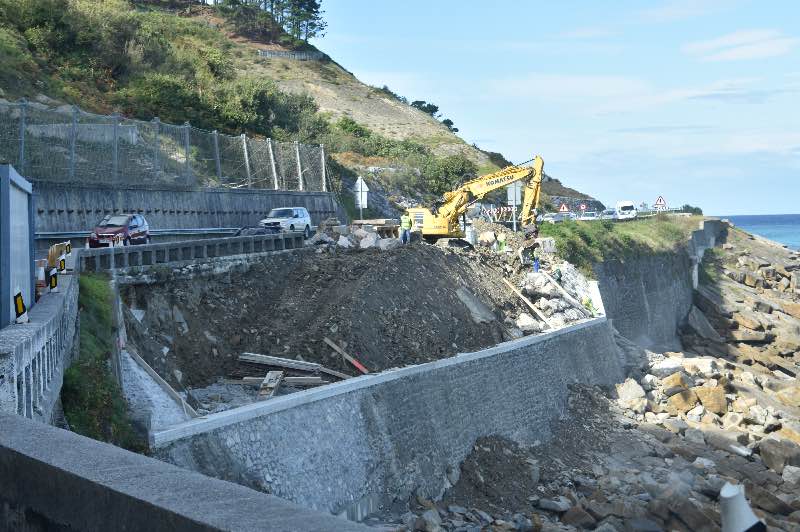 When the developed coastal road changed into a thin curvy “Scenic Road”, I asked to drive inland and we rushed Big Fredi through the mountains. He puffed with up to 15% gradient and many curves. On the Urkiola Pass there was a fantastic resting place with many picnic tables and benches, each with its own barbecue area. The toilet is barrier-free and there is even running spring water. A sign that the harmlessness of the spring in terms of hygiene could not be guaranteed kept us from replenishing our drinking water reserves.

But I was able to walk a nice round through the forest. It had rained, but was again sunny and wonderful to move around.

Well recovered from the fresh forest air we continued our journey on the soon appearing Autovía. This is a free highway, which led us in this case to Burgos. A small place off the highway served us as a sleeping place. The area next to the motorway looks so terribly barren that we decided to explore the “outback” again from now on.

We didn’t get far, because after about 15 km the road ended, as already announced before and only a gravel or mud road would have led us out of the mess. So we had to turn back and take a parallel route. Too bad, we would have liked the new, unfinished road with the fine black asphalt. But it wasn’t finished yet or we were just too early. So everything back. Fortunately we are not in a hurry.

Today we got the tip from Paul to have a look at “Picos de Europa”, the first Spanish national park. 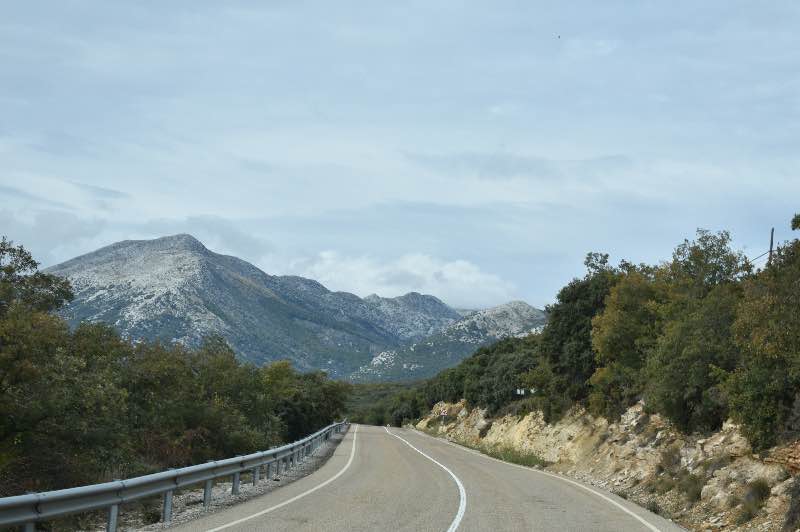 We decided to go there and have a look at the “summits of Europe”. We were warned that it could get wet. We already noticed that yesterday. Not for nothing it is still very nice green here.

The weather forecast claims the next 9 days would be rainy throughout. From past reports we know that it is usually much nicer than predicted. So we are also prepared for bad weather and so we let everything come to us. Currently we are in Herrera. 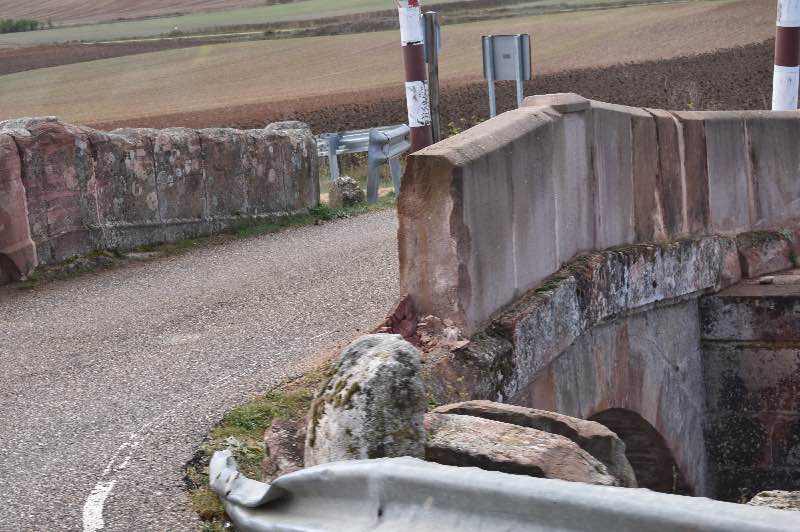 Over a tiny dilapidated Roman bridge we have “crept up” from the outback. Big Fredi could just squeeze through. 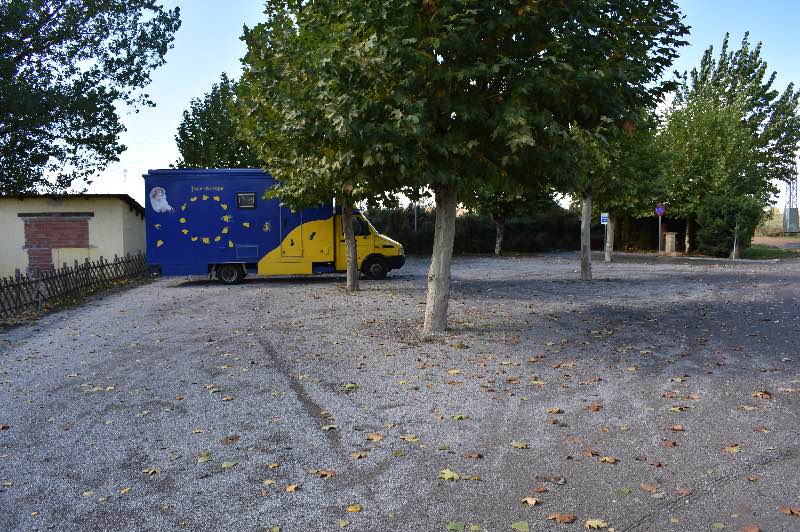 An acceptable parking place with disposal possibility lies at the edge of the small town. 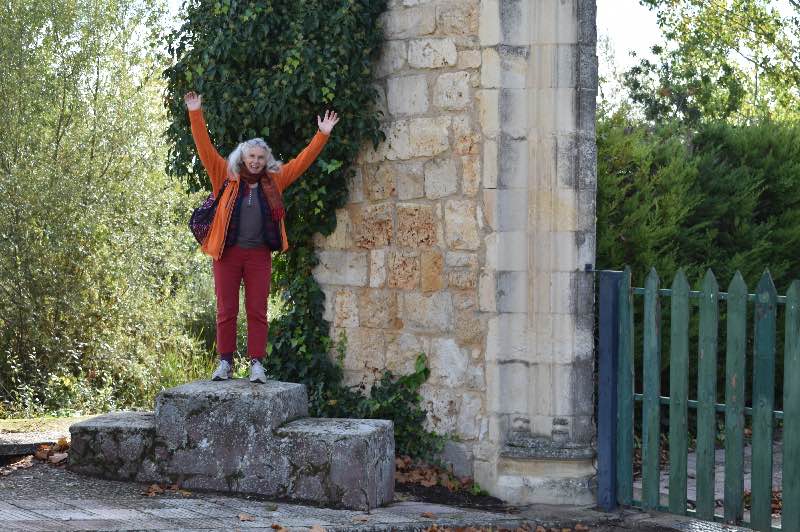 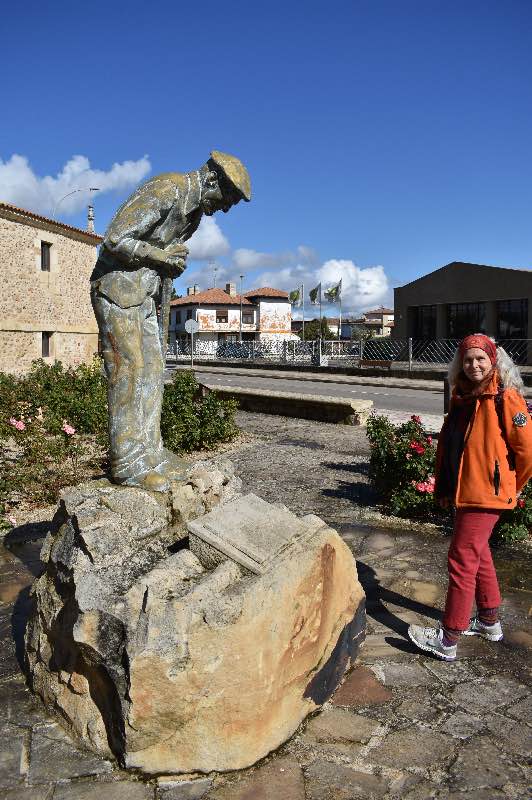 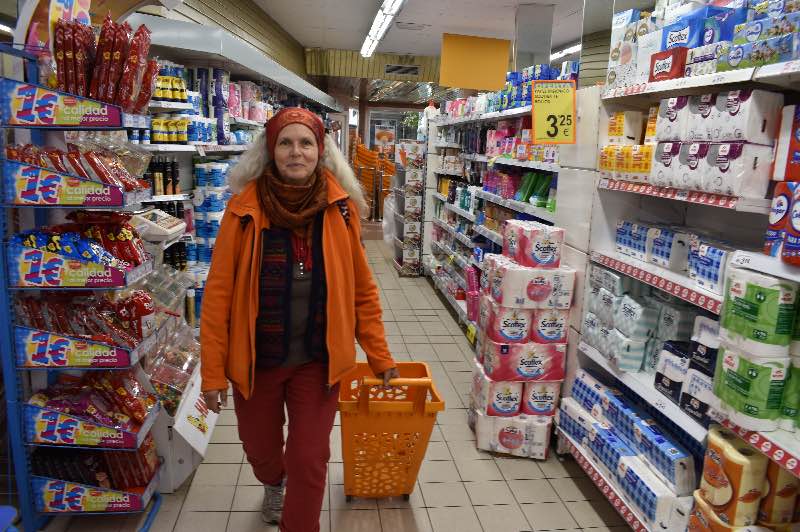 We even found a supermarket and were able to replenish our supplies.