No bears but lots of berries

About an hour after we had said goodbye to Gabi

and he had driven up the mountain again to take drone pictures, he sent us photos of a bear on the side of the road and gave us the opportunity to make the same acquaintance.

However, this was 4 km away and our Big Fredi was not set up to drive. It would have taken too long to get to the point whose geodata Gabi had sent us.

So we fell asleep without seeing a bear and hoped that maybe he would be waiting for us in the morning. But what was waiting for us was a flock of sheep of enormous proportions.

It takes a while to move a flock of sheep like that. But at the very spot where the bear had been sitting the night before, the herd turned off the road and trotted into a meadow. 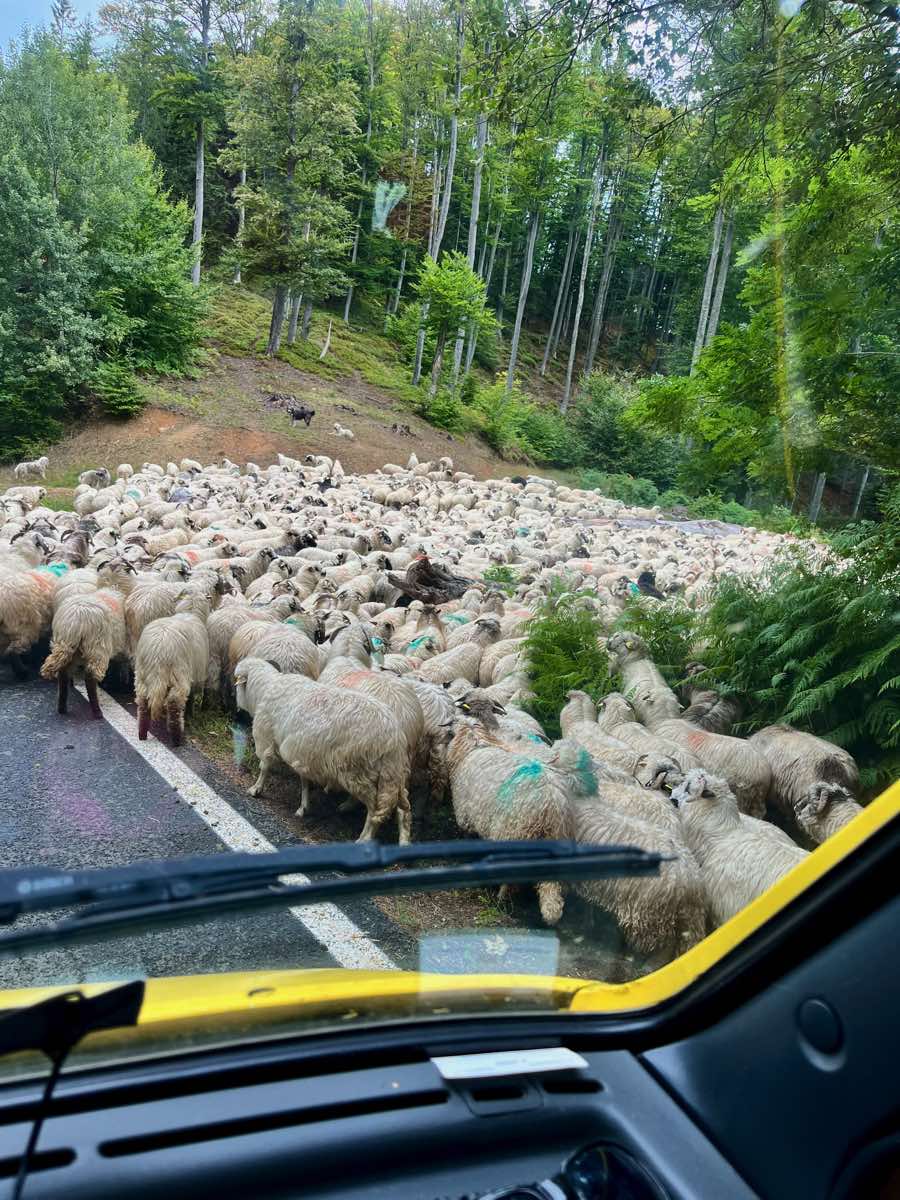 We, however, drove back down the many switchbacks of the Transfagarasan from where we had come. A height restriction of 3 m prevented us from continuing our way south. Passing through Fagaras, which gives the mountain massif its name, we continued eastwards towards Brasov. Before we got close to it, however, we were informed that there was a driving ban in the city centre for cars over 3.5 tonnes and we spontaneously changed our route towards Sighisoara, which Gabi had also highly recommended. 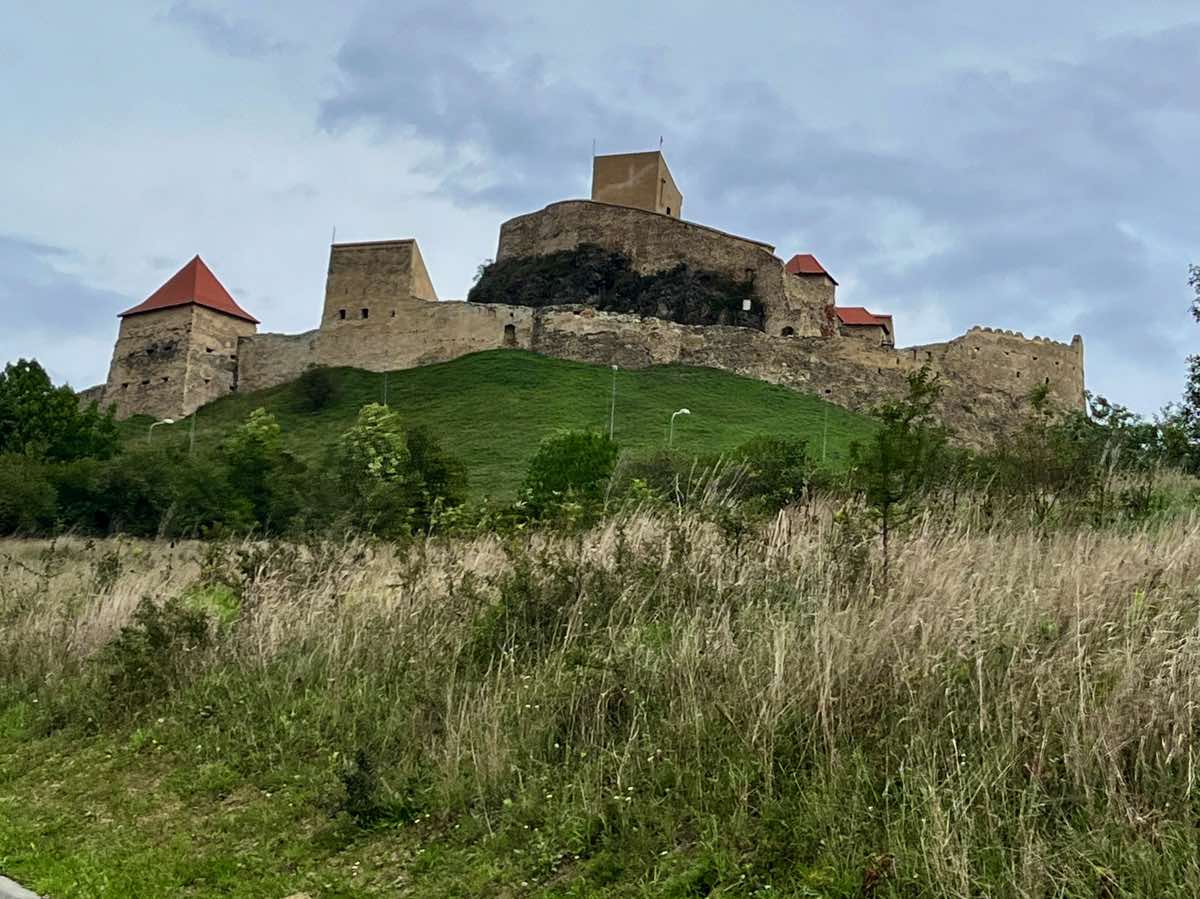 On the way there, we discovered the ruins of Rupea, which we – having acquired a taste for sightseeing – visited. An exhibition of an old tile factory in a restored building was the only thing worth seeing in this former fortification. 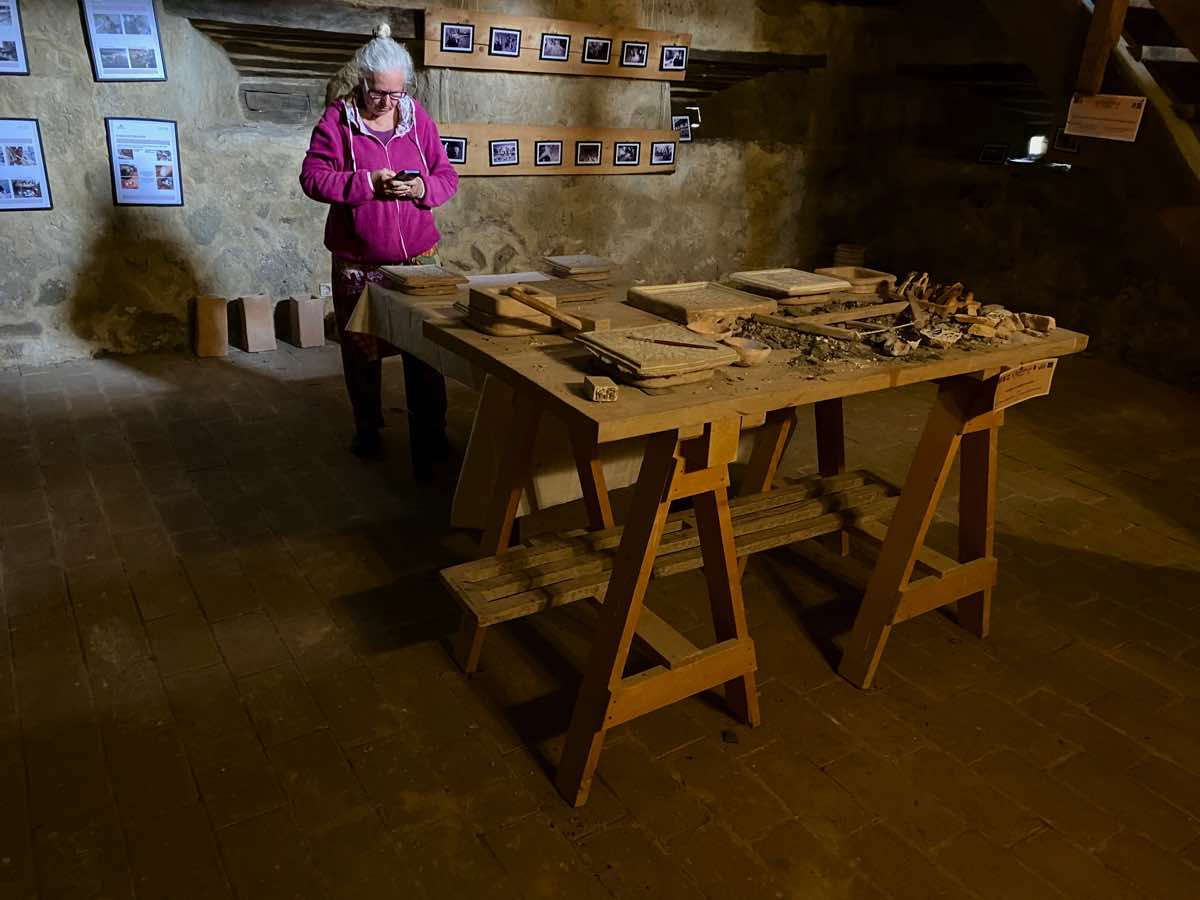 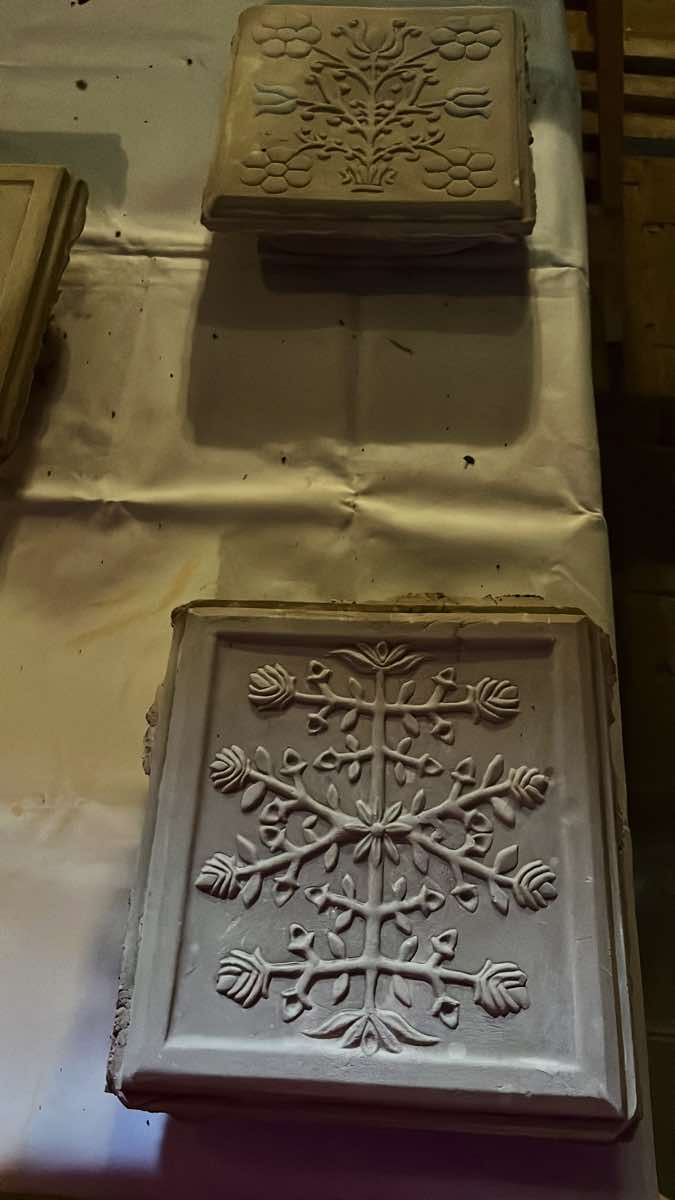 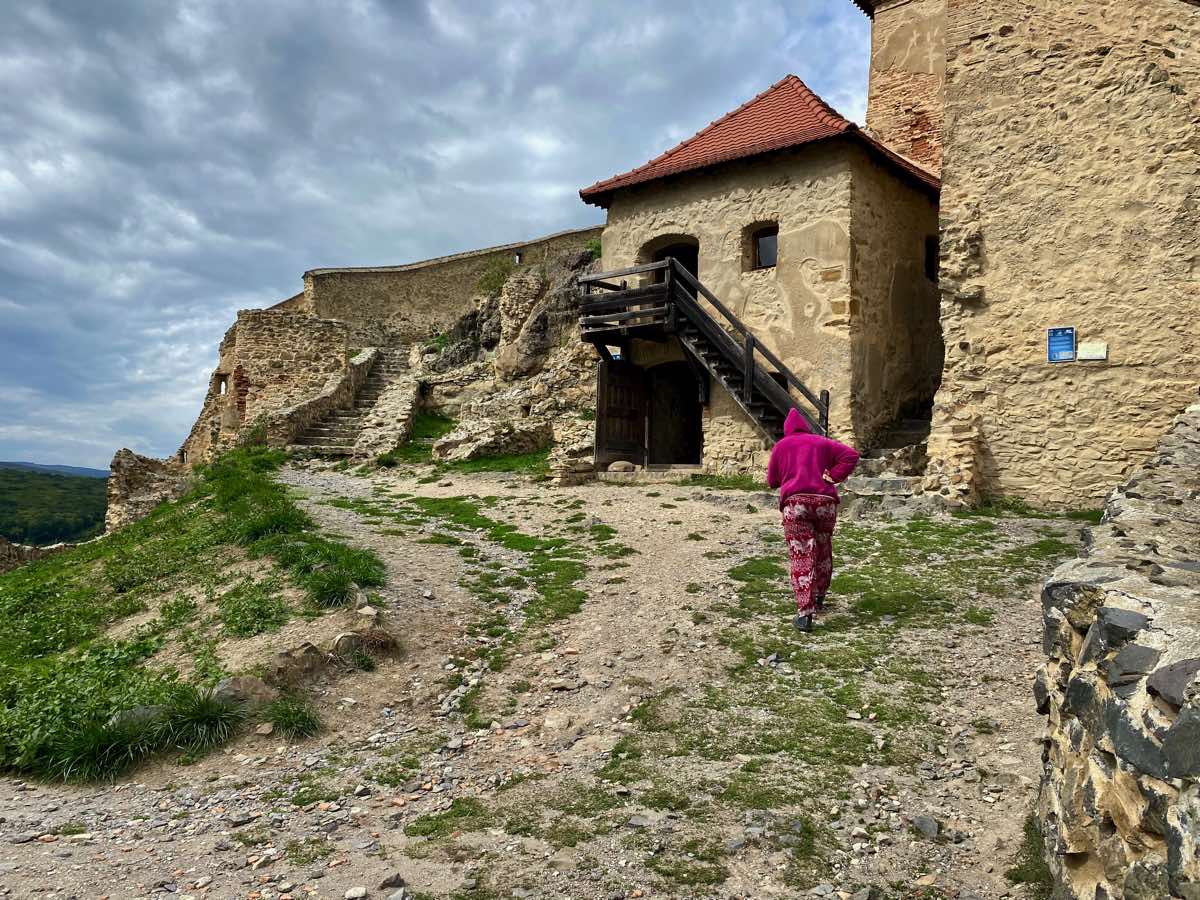 We had to think of Gabi again, who told us about the poor marketing and lazy handling of really great sights in Romania compared to other countries. The Romanians think they make something public and that’s enough. There is a lack of creativity and desire to make something special out of a sight.

And so it was not surprising in Saschitz that the citadel has not been open to the public for years.

We also only saw the fortified church from the outside.

We found a place to stay on a former football pitch, which gave us parasol mushrooms. For 2 days I walked around the area, the hills were easy to take.

It was still quite warm and humid and we stayed for 2 nights.

Only about 30 km separated us from Sighisoara, our next destination. 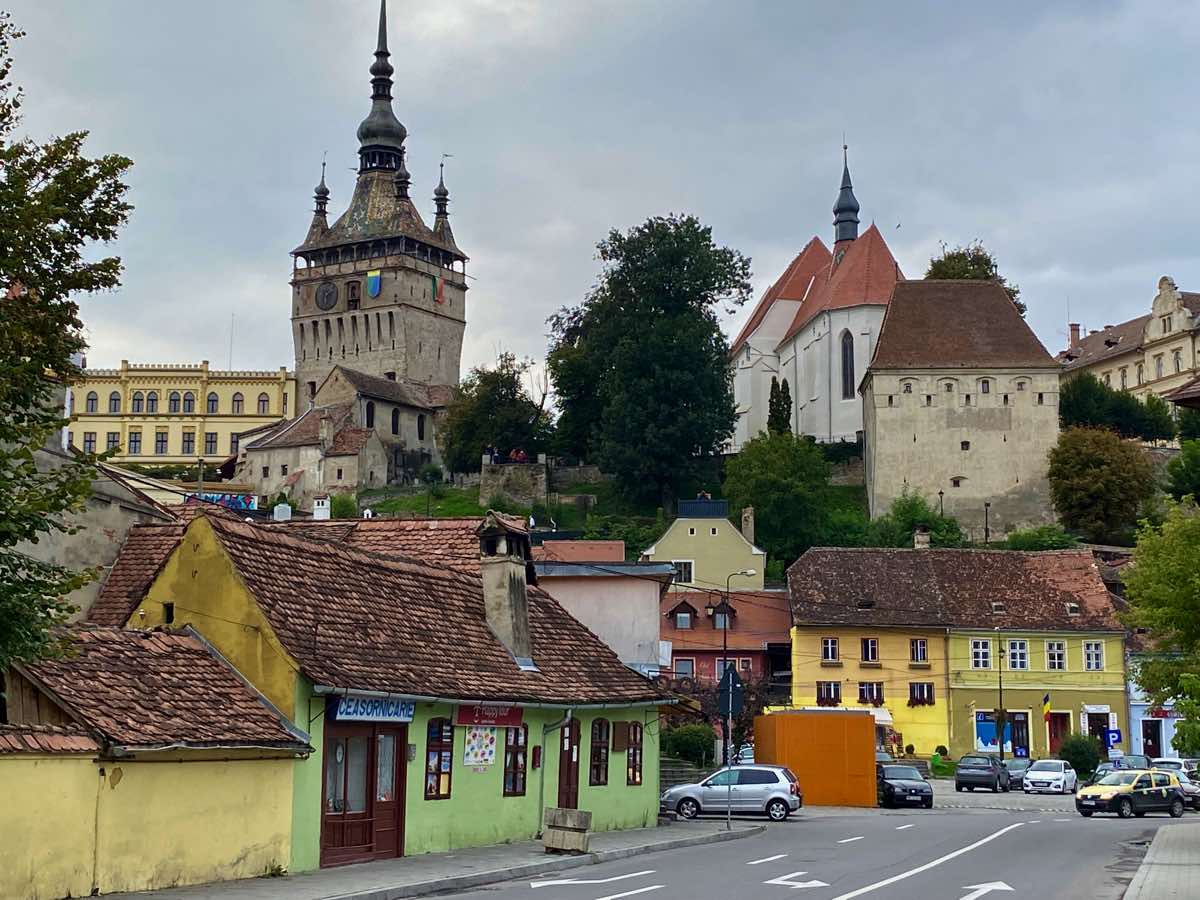 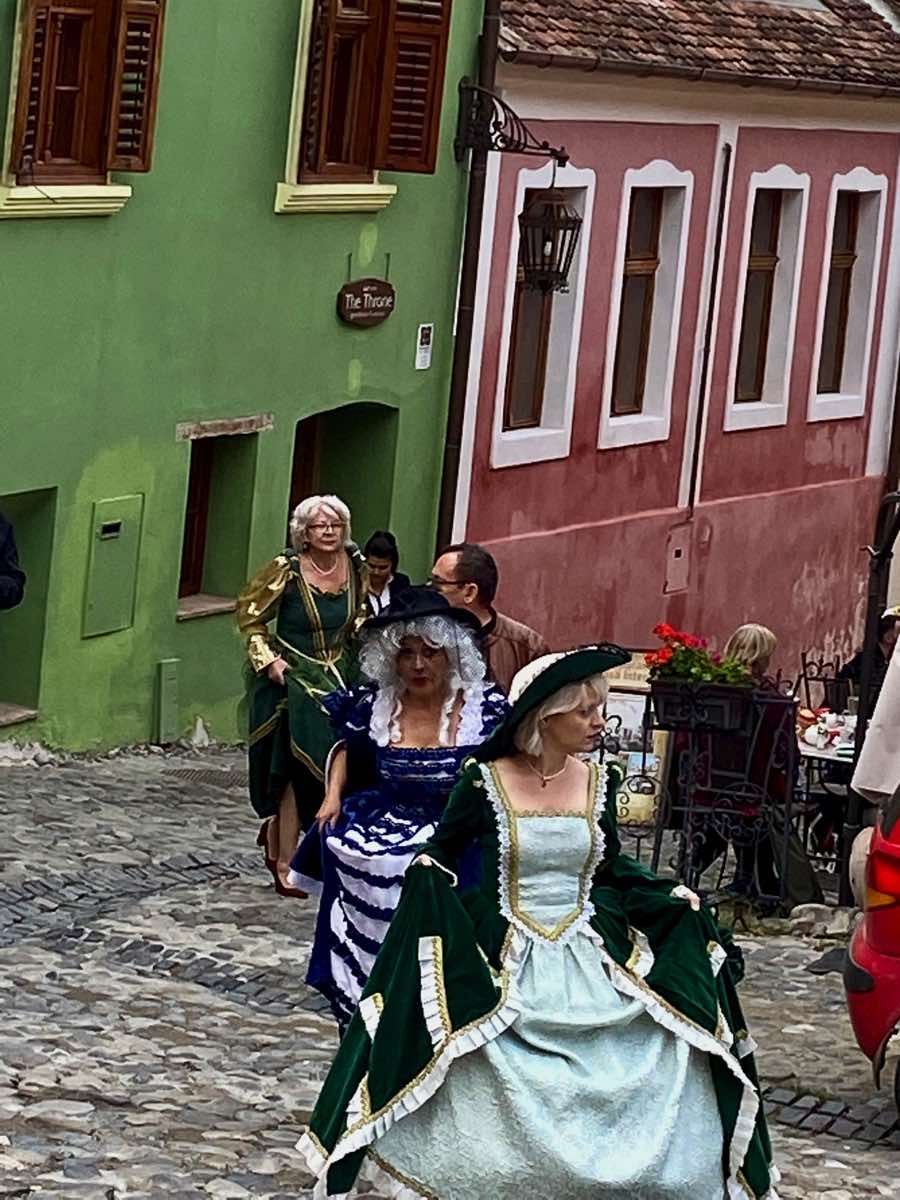 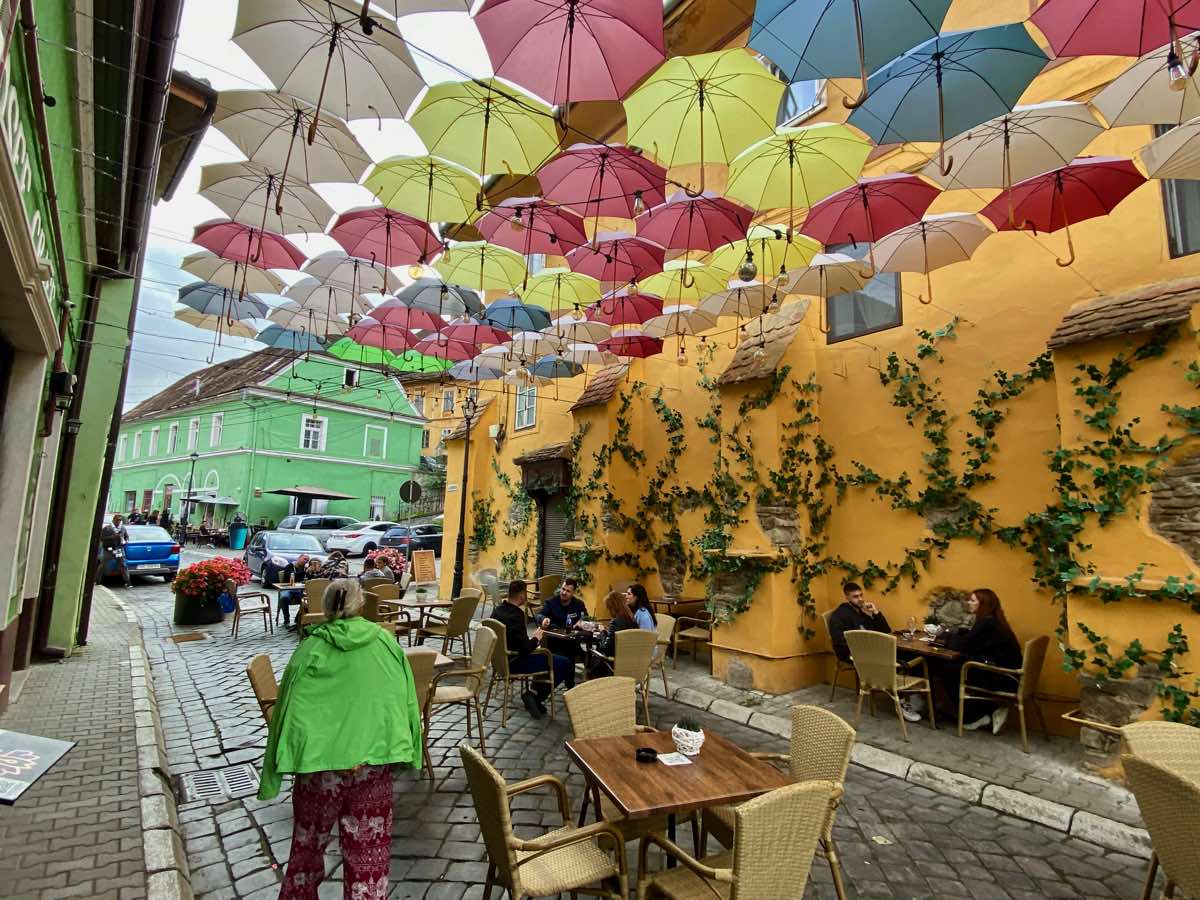 In the evening we managed to stroll through the beautiful medieval town before it started to rain heavily and we were happy to leave the city again on Sunday around noon.

We finally left the Carpathians via the idyllic E60 and soon the clouds cleared, we saw the sun again and the mood improved with every km.

Another overnight stay at the Siriu reservoir before we set off for the mud volcanoes near Berca on 19.9.2022.

I couldn’t resist the yellow berries for sale at the roadside and with 2 kg of berries I didn’t know, we arrived at the Volcanii Neroiosi in the afternoon at summer temperatures. 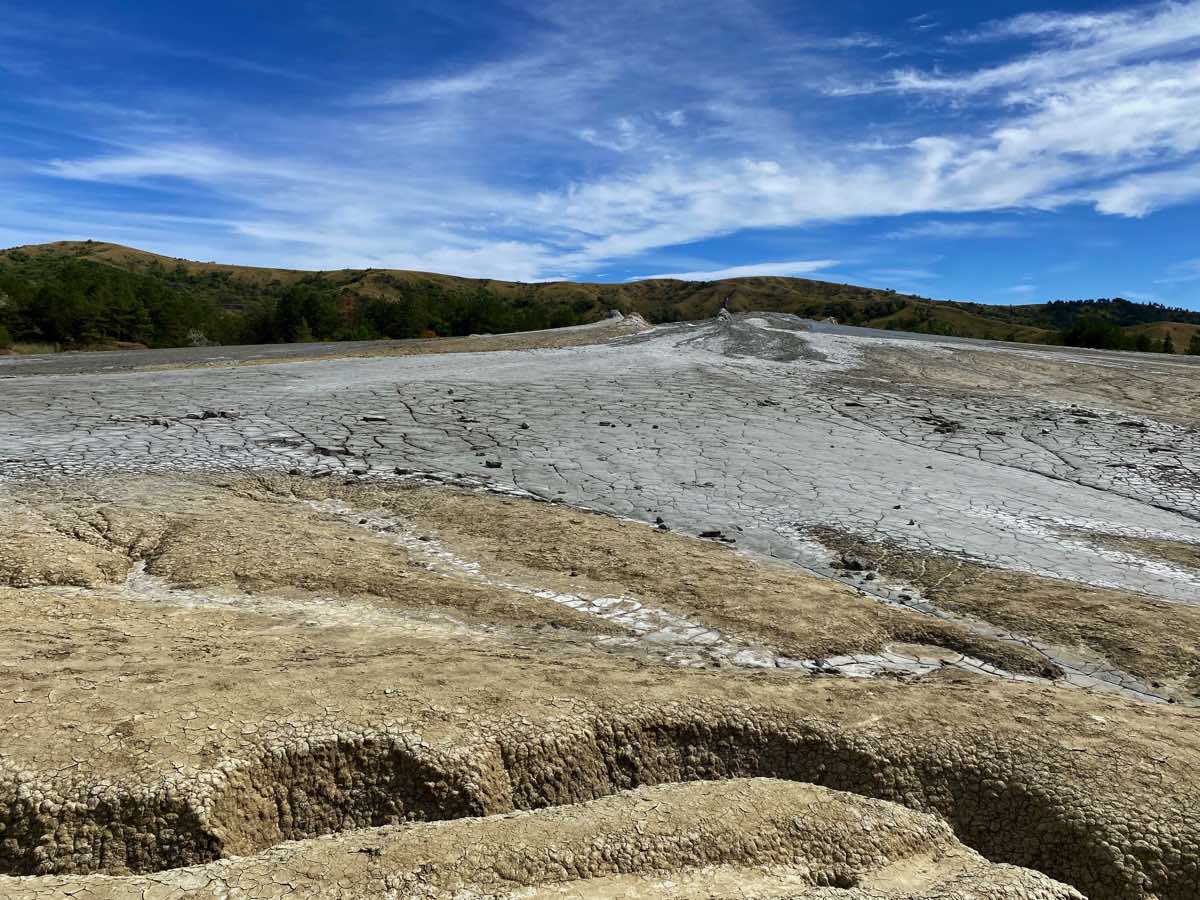 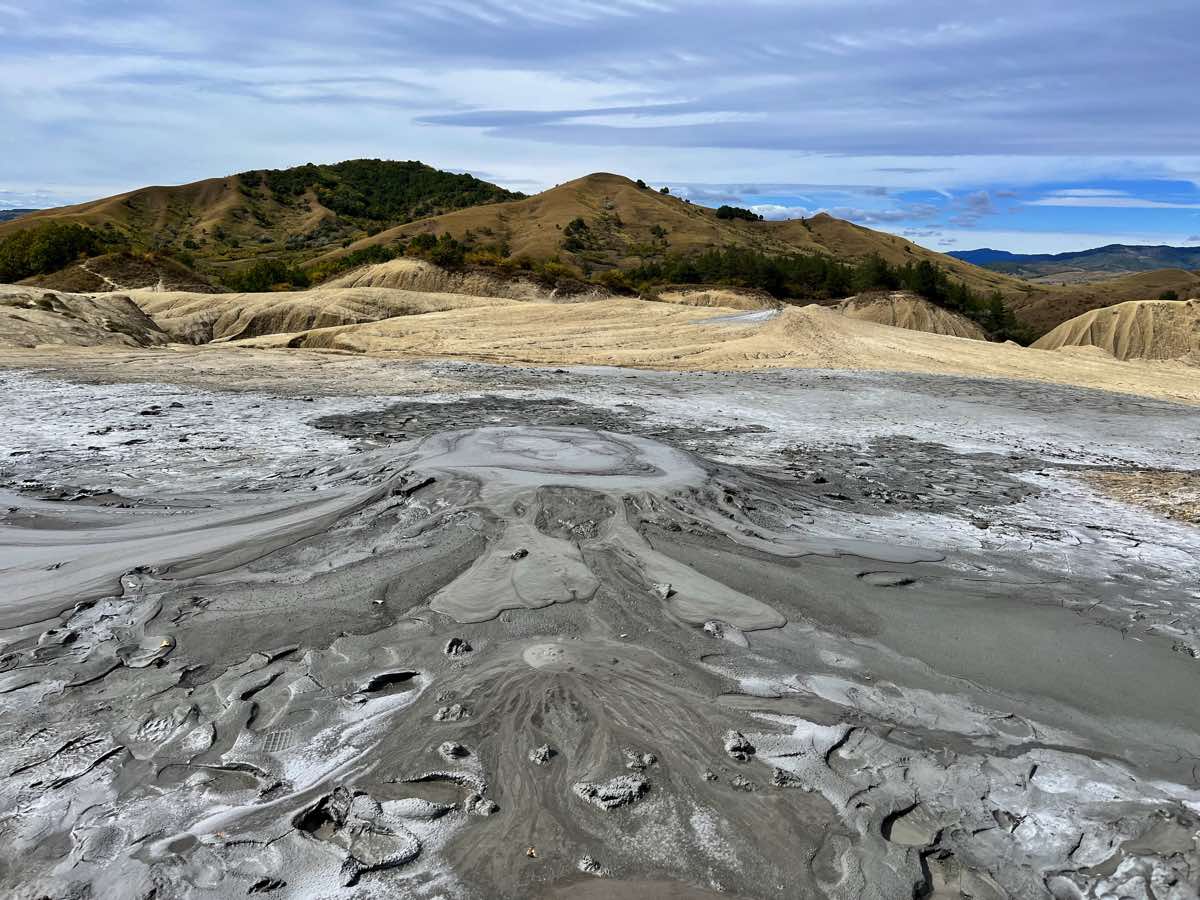 The whole landscape could have come from the time of the dinosaurs and it is impossible for animals and plants to live long after the mud volcanoes have ended. 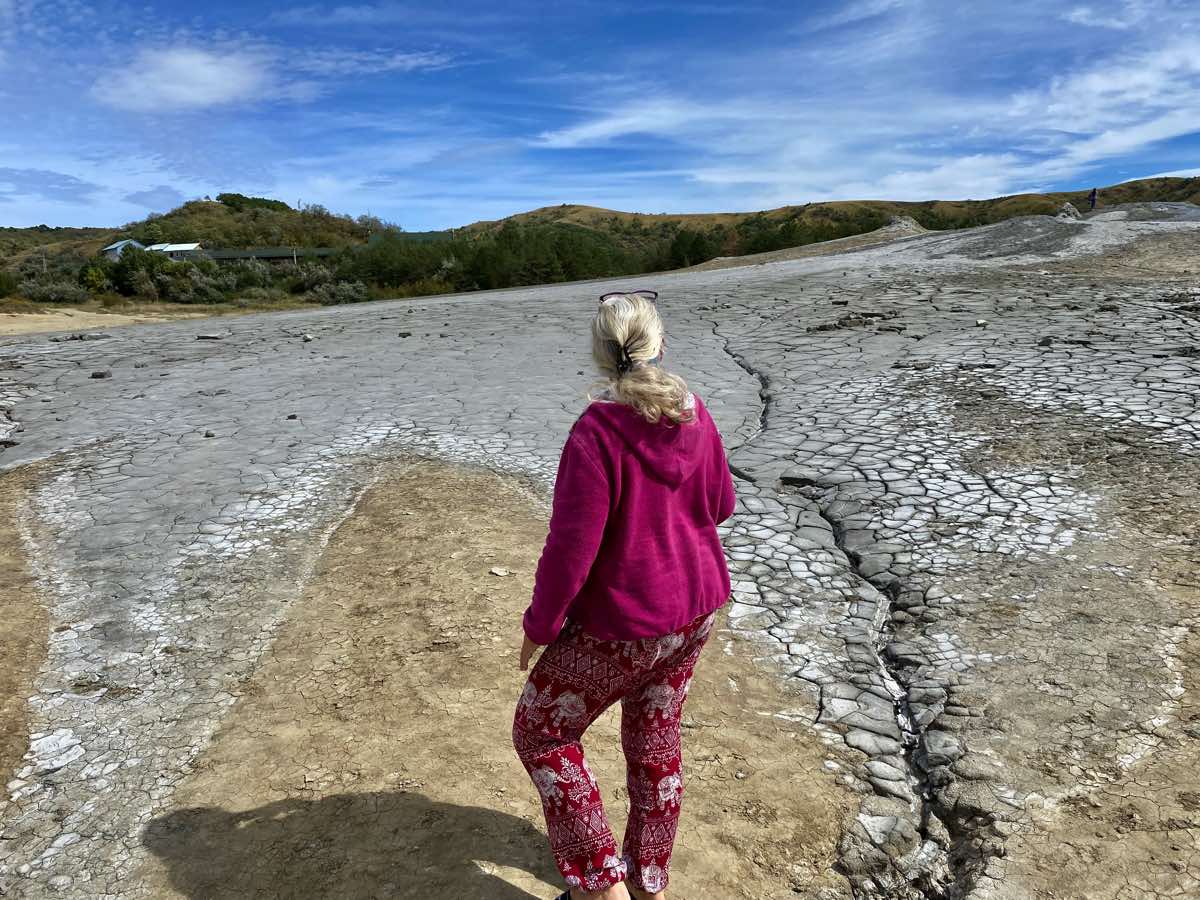 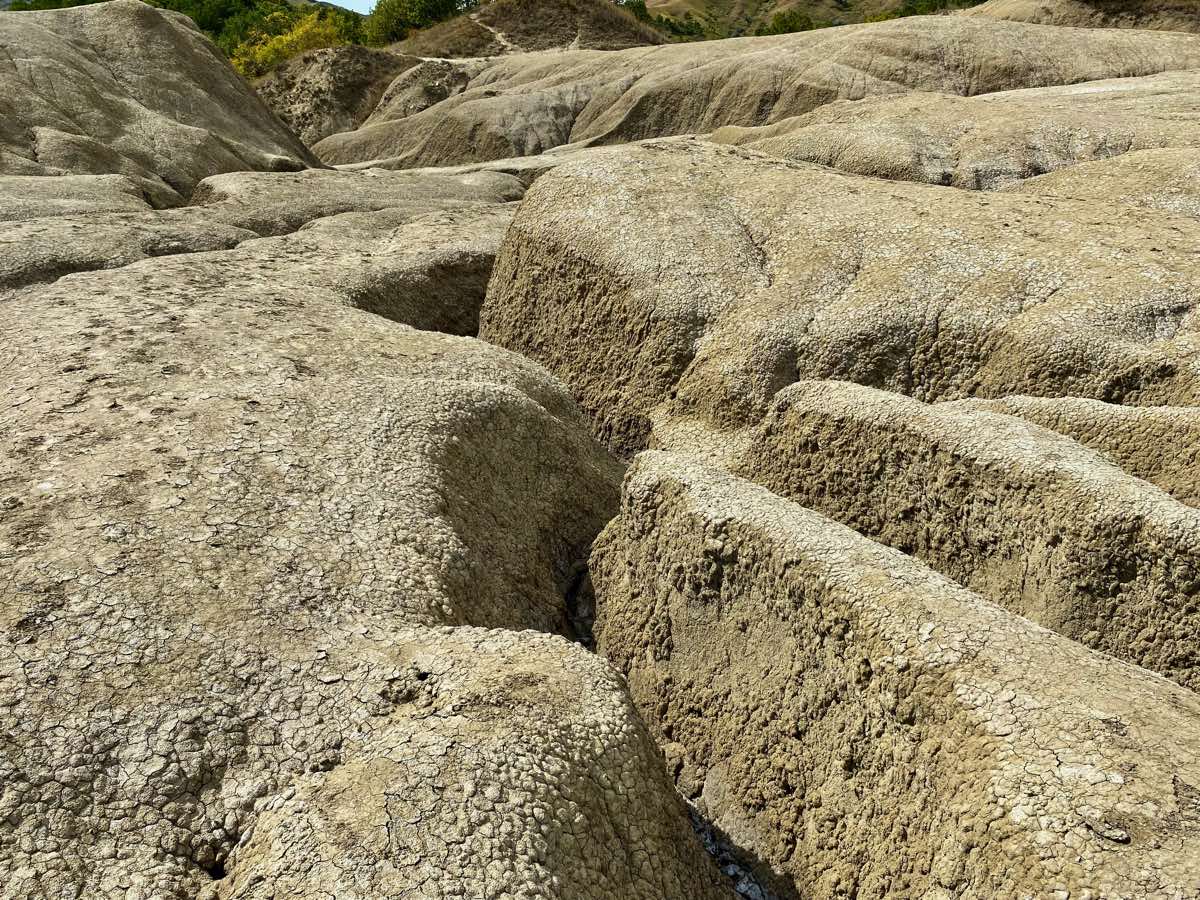 Although these volcanoes do not have lava inside, sulphur, salt and water combined with impermeable layers of loess and the necessary pressure create these mud holes from which it permanently gushes.

It looks like the mud holes are constantly throwing up, and that’s also what it sounds like.

Yesterday I also solved the berry puzzle. What I bought here are not Goji berries but sea buckthorn. Some of them I made into a honey mixture rich in vitamin C, some were prepared for jelly. The pomace was used to make sea buckthorn oil and a liqueur. I am very curious about the result.