In Avilés we got a new tyre,

which will quickly lose its tread next to the old worn one, as the tyre fitter predicted to us by turning his eyes. The city rides are pretty exhausting for Wilfried’s nerves and so after the wheel change we only got into a single layer near Villafria. A great parking lot with picnic places, grills and a big shady meadow with countless benches and tables are designed for big celebrations. 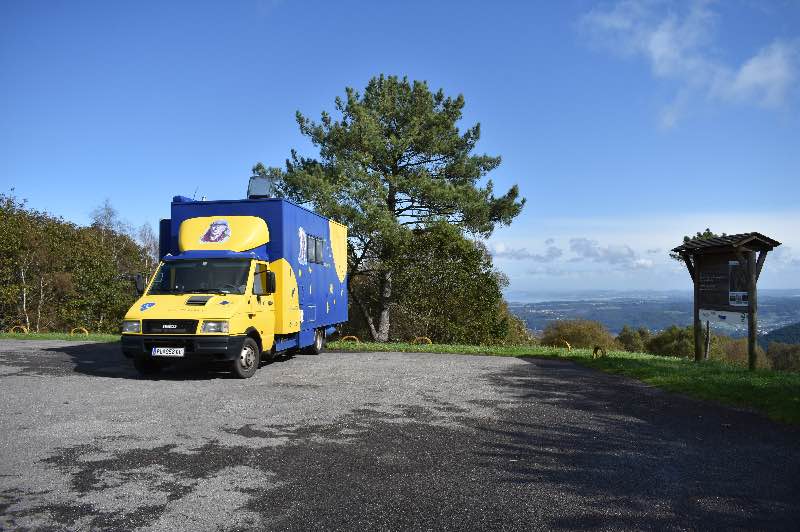 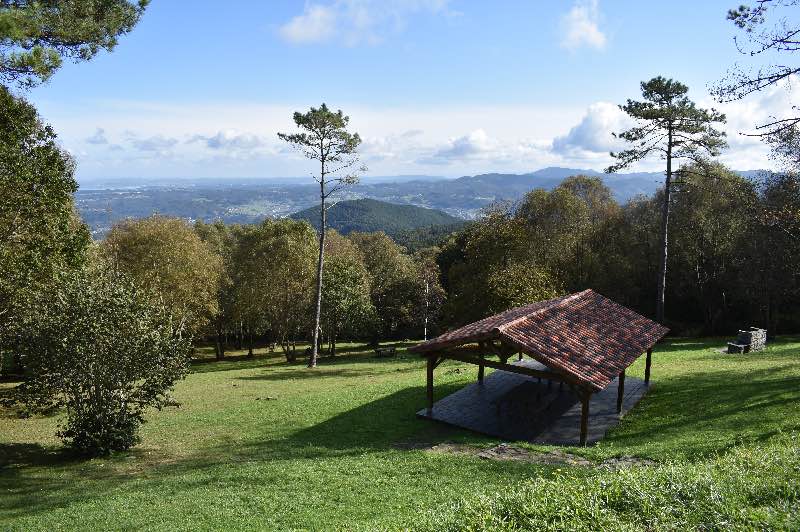 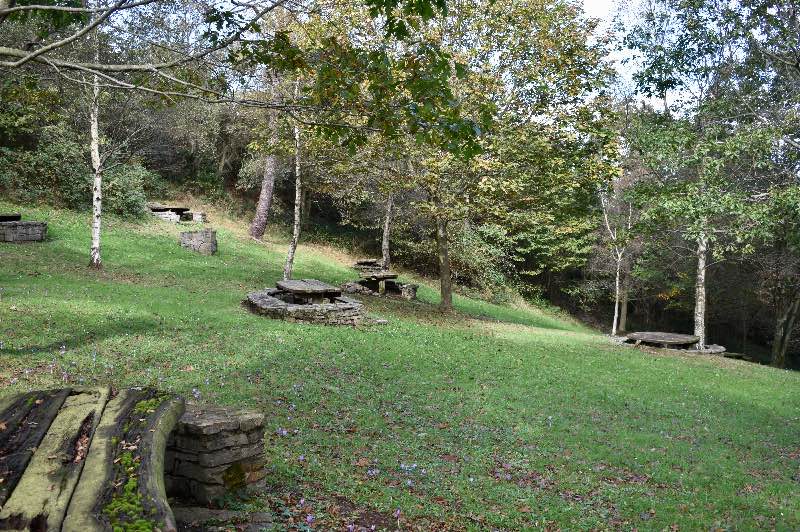 They can be found in many small villages and are ideal for the fiestas of the respective villages. Overlooking the – quite dar away – sea we enjoyed 2 nights there. The Czech family, whose camper van we had already spotted at the Lidl 30 km before in Avilés, joined us.

A small round in the sunshine with a view of the sea was enough for Wilfried to do some sports. 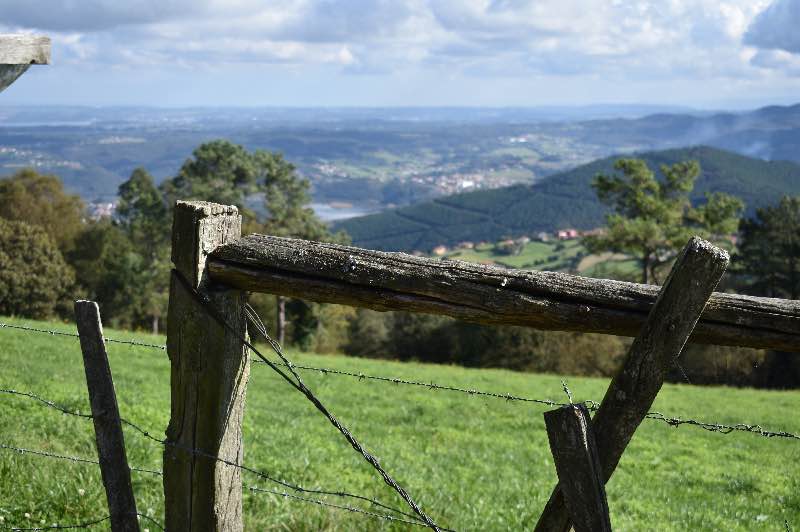 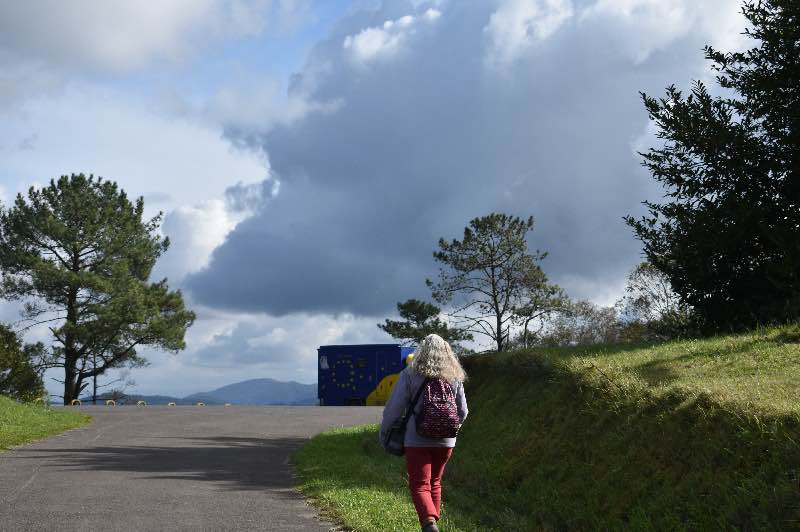 The next day it was already raining and we left at noon. The trip along the coast was not very spectacular. In order to get directly to the sea, we would have had to torture ourselves from the main road through narrow alleys.

So we left the coast before the bridge to Ribadeo and headed south into the mountains. Paul had recommended us to visit Fritz in Santa Eulalia de Oscos and to inspire him for Face Europe.

Our expectations were very low. For this we were rewarded with Fritz very much. He was already reachable at noon, although Paul announced that he could only be reached at 21 o’clock. Fritz is a blacksmith, started about 30 years ago for a winter trip to Spain, from which he never returned home. After many years of searching, he has revitalized Spain’s last hammersmith’s shop as a hammersmith’s show and found his happiness.

The Face Europe meeting could take place in the forge, which was a particularly exciting ambience. The humid air was defused by a fire in the forge and contrary to our expectations it was not cold at all. It had rained often during the day, but packing and unpacking could be done in the dry. The smithy can be reached from 2 sides, but the shorter way is only accessible by car. At the bottom of the valley, of course at a brook, the blacksmith is stuck in a hollow. If Fritz had not driven ahead of us, we would never have found our way there at night. A restaurant right next to the forge offered us the parking place during the meeting, but we spent the night on another parking place 200 meters further on.

After the portrait session we got a private demonstration from Fitz in his blacksmith’s shop. 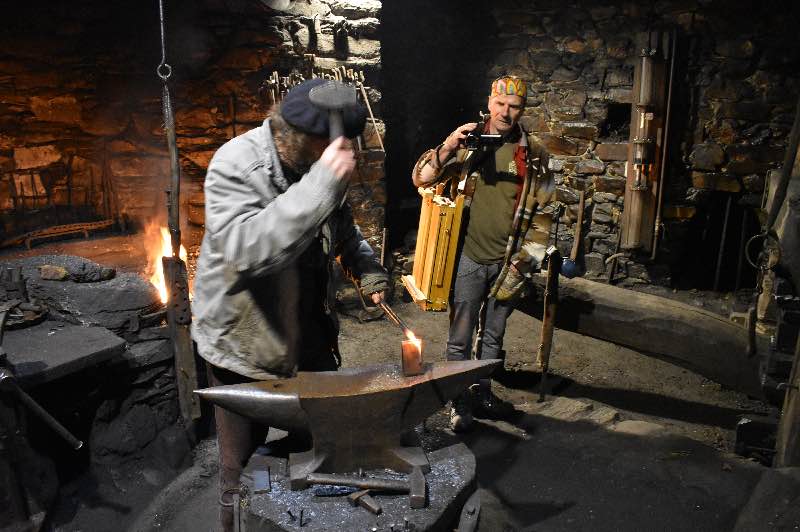 A huge hammer rushes on Fritzens behest with a tremendous force on the glowing iron. The water power generates both the necessary supply air for the fire and the momentum for the hammer. The workpiece, a leaf, was given to us as a present.

In the morning there was sun again for a change. Big Fredi was again put to Santa Eulalia in the sun. The last days the sun had left a lot to be desired. At lunch with Fritz yesterday we also learned that Paz would like to be portrayed in the evening. She is Fritz’s colleague, a fun-loving Spaniard with whom we spent a nice evening. She came straight from the smithy after work and stayed until midnight. 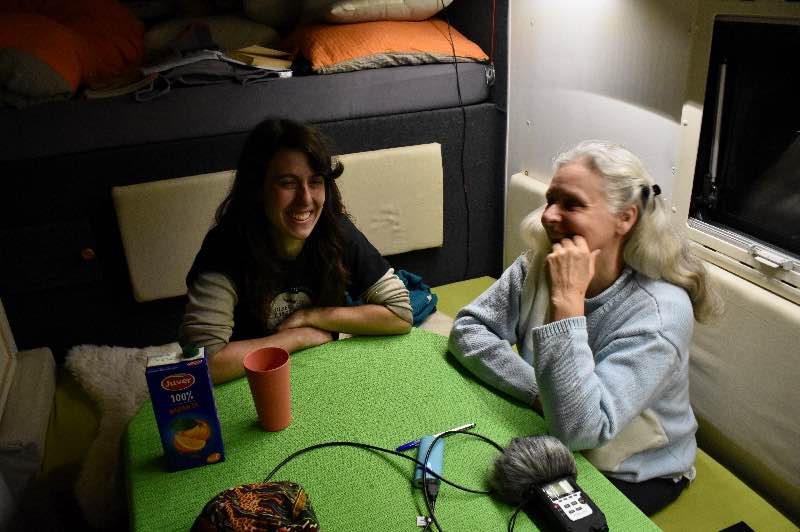 Today is Austria’s national holiday and many places are used for hiking. We also used today’s sunny day for a hike. A beautiful route led us to a waterfall.

After 3 hours we were tired and my hiking boots broke after 30 years. The sole disintegrates and even an attempt to glue the shoes will not save them for mountain tours. The small shop in the village has good mountain equipment to offer, while the fruit and vegetable boxes look rather sadly empty. That was a hint of fate. Today – Saturday afternoon – was still open and I bought a new pair of hiking shoes. I’m already looking forward to the next hike with it. They are bright red Goretex shoes with vibram soles. The reduced price of 75€ seemed cheap to me and so I am now prepared and we can calmly go even further into the Spanish mountains.

The landscape here reminds us very much of the mountains in Austria. Maybe this is also the reason that Fritz here has the feeling to have come home.

Stay tuned, you will soon find out.

1 thought on “National Holiday in Austria ”