From Sciacca we drove across Sicily towards Enna,

the „navel“ of Sicily, and then back home along the north coast.

In a tiny village belonging to the municipality of Enna, we stood in surroundings that could just as easily be in Tuscany. 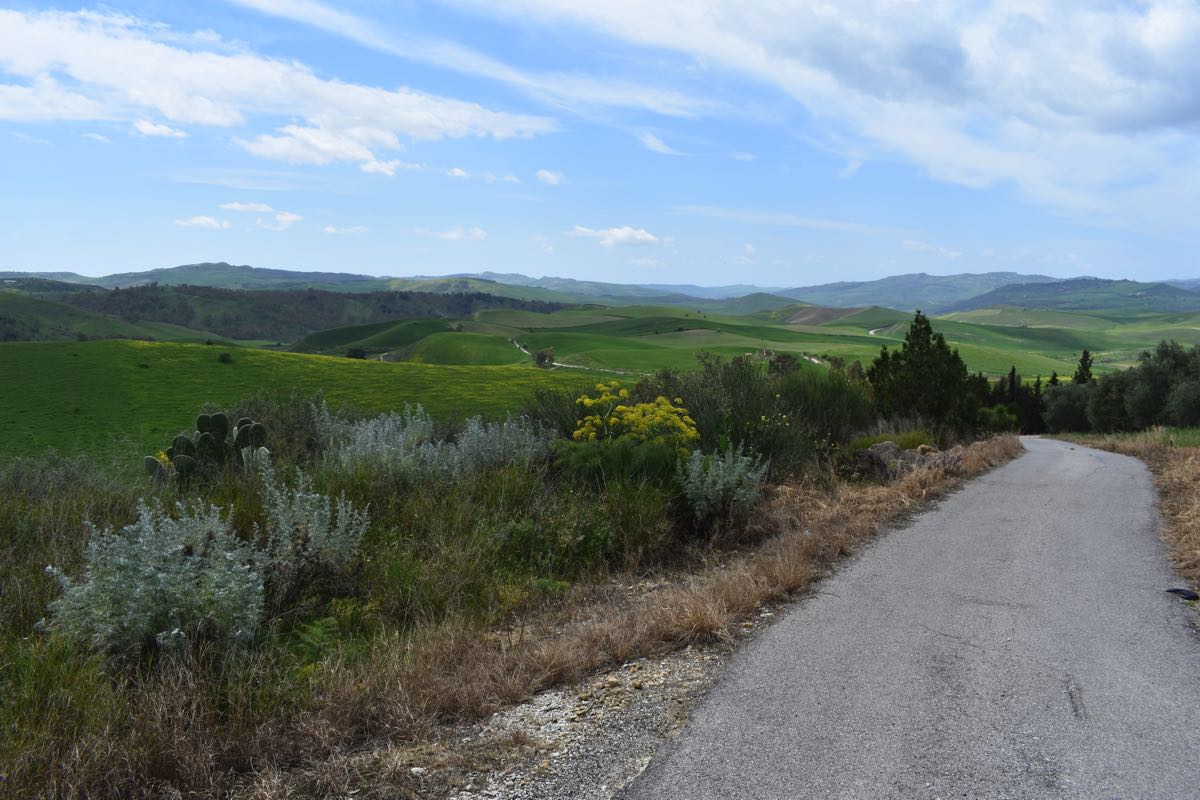 Borgo Cascino is the name of the nest and apart from a few small houses, a church and an inn that is currently being renovated, we couldn’t find anything of interest.

Even the only natural lake in Sicily was not what we would expect from a lake. From a distance we saw a green structure, but we couldn’t get anywhere near it. A race track and a fence separated us from the lake.

A few daring motorcyclists were doing their training laps. So we headed for Enna to get a panoramic view of Sicily. As expected, there was a good breeze at the viewpoint and we were glad to be able to look at Etna from the cabin again. 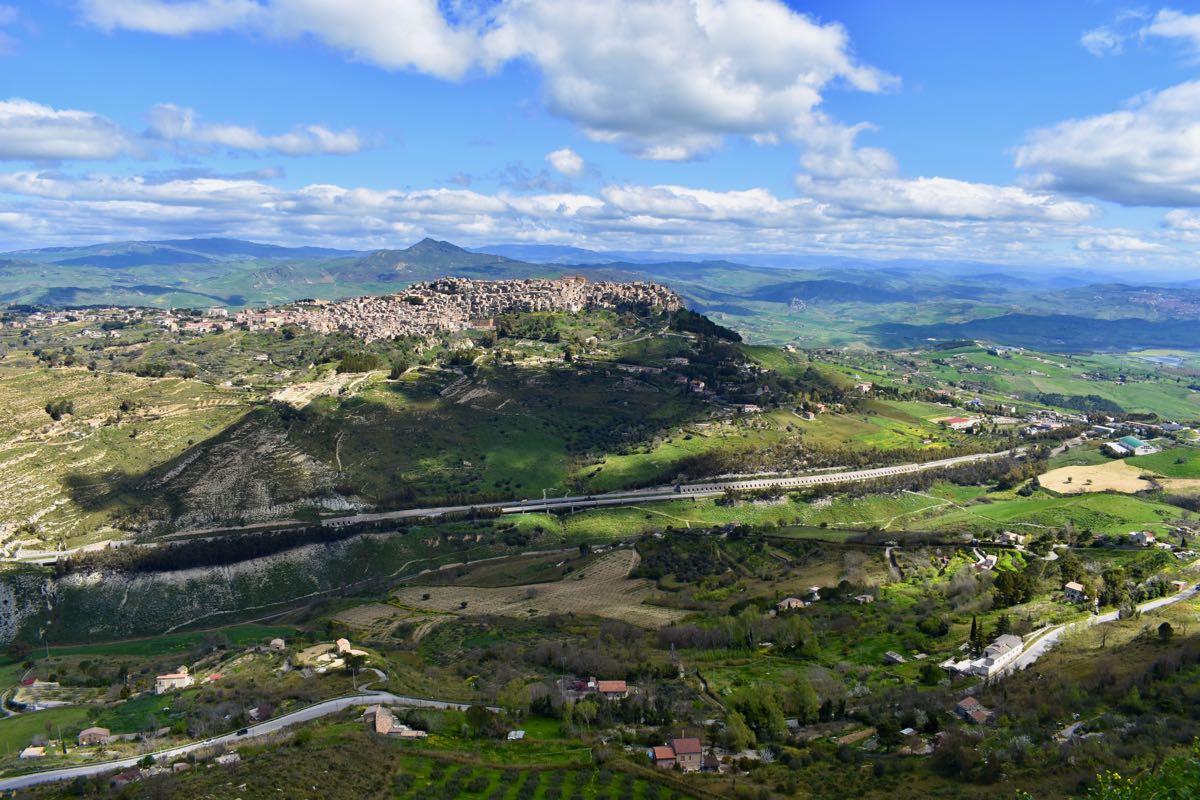 The motorway quickly brought us to the north coast near Cefalù, from where we took a closer look at the north side of the island on the main road.

Actually, we wanted to stop at Maria and Filippo’s, unfortunately they were not at home, but 150 km away.

So we just talked on the phone and promised to stay in touch and see each other again.

In San Giorgio, there was little wind for a change, although we parked right at the beach. A flat spot next to a playground and a few cheeky boys drumming on our troubled Big Fredi. When Wilfried forbade this, a cheeky boy stood in front of him and wanted to argue with him. Wilfried didn’t answer him, but repeated in a brisk tone that he didn’t want the banging on the car and the gang left. 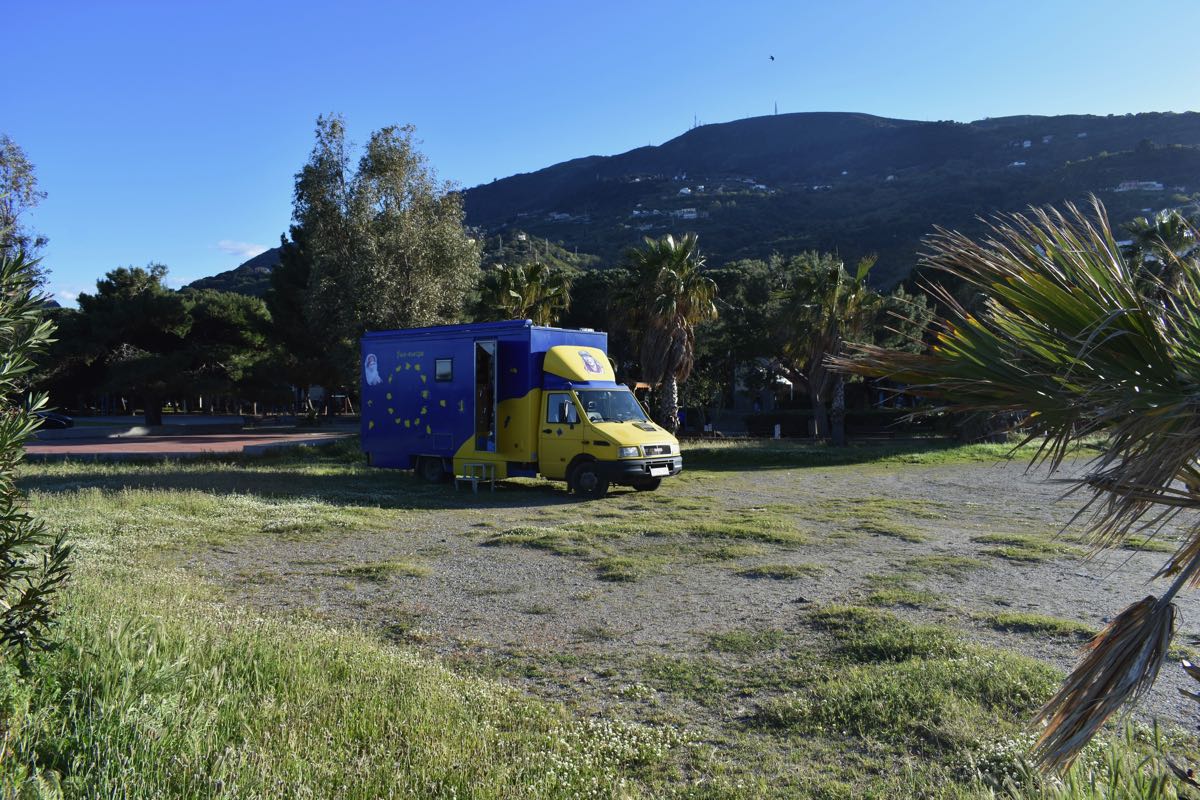 Otherwise, we are very grateful for the night curfew and the increased police presence. Drunken youths playing loud music next to you at night are nowhere to be seen. They do meet during the day, palawing loudly and gesticulating, laughing a lot. Fortunately, despite Corona, they still have something to laugh about. We meet few Sicilians, the language barrier is too troublesome for many. My Italian is still too weak to talk to the locals.

The road along the coast on the SS113 was very interesting at first, because it was hilly and without much traffic. Often you could see the sea. 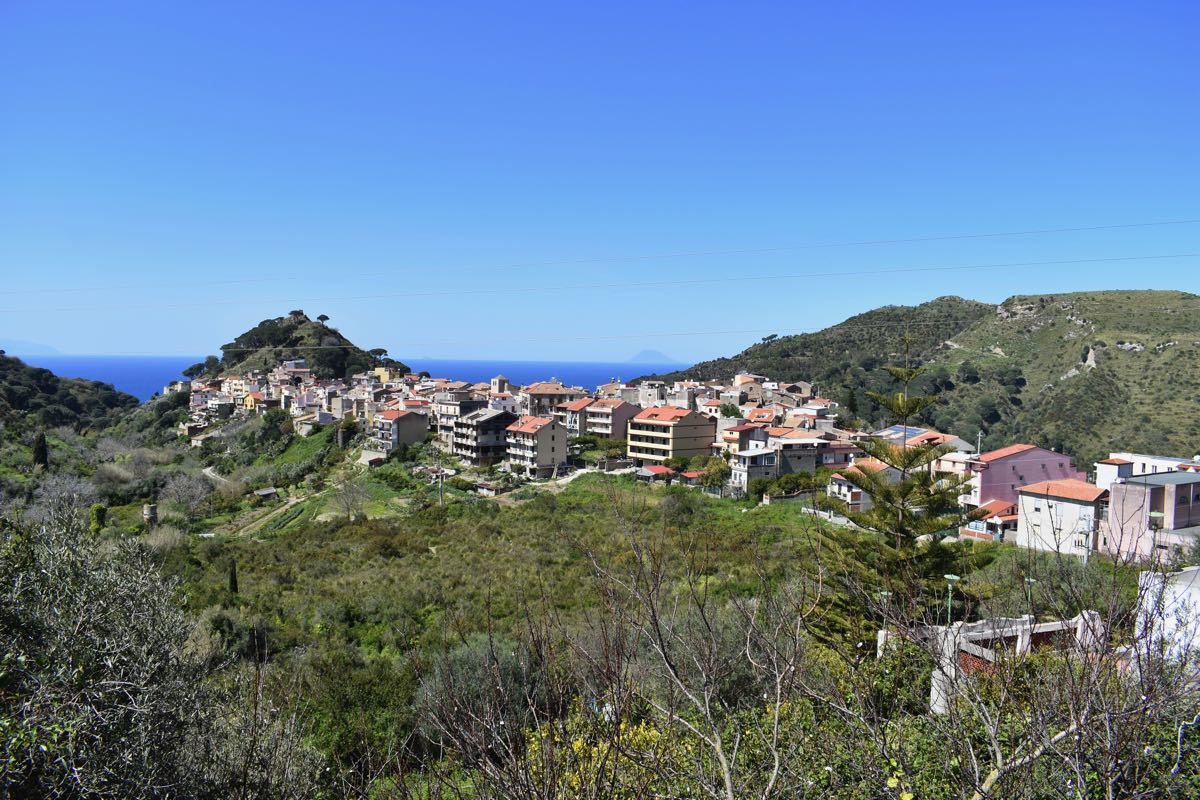 But after many bends, there were more and more villages to drive through and they became narrower and narrower.

In Salice Messina – a small mountain village already inland towards Messina – it happened.

The oncoming driver chased us to the far side of the road, which had a balcony too low for our Big Fredi. He stuck his awning into the air-conditioning and the balcony and there he got stuck.

The owner of the house – Stella – could only be calmed down by the neighbour and the police was also called. Communication is extremely difficult, my Italian is too poor and the English of all the Italians – no Sicilians – is non-existent. One of the mothers waiting for their children tells us about her son, who has learned perfect English from YouTube videos. The police organise the fire brigade and then the street – the only artery of the village – is sealed off. Big Fredi leans against the wall of the house and doesn’t move. Everyone except Wilfried is pretty much at a loss. He dismantles the broken awning in pieces and wants to try to move back a bit to get free under the balcony. 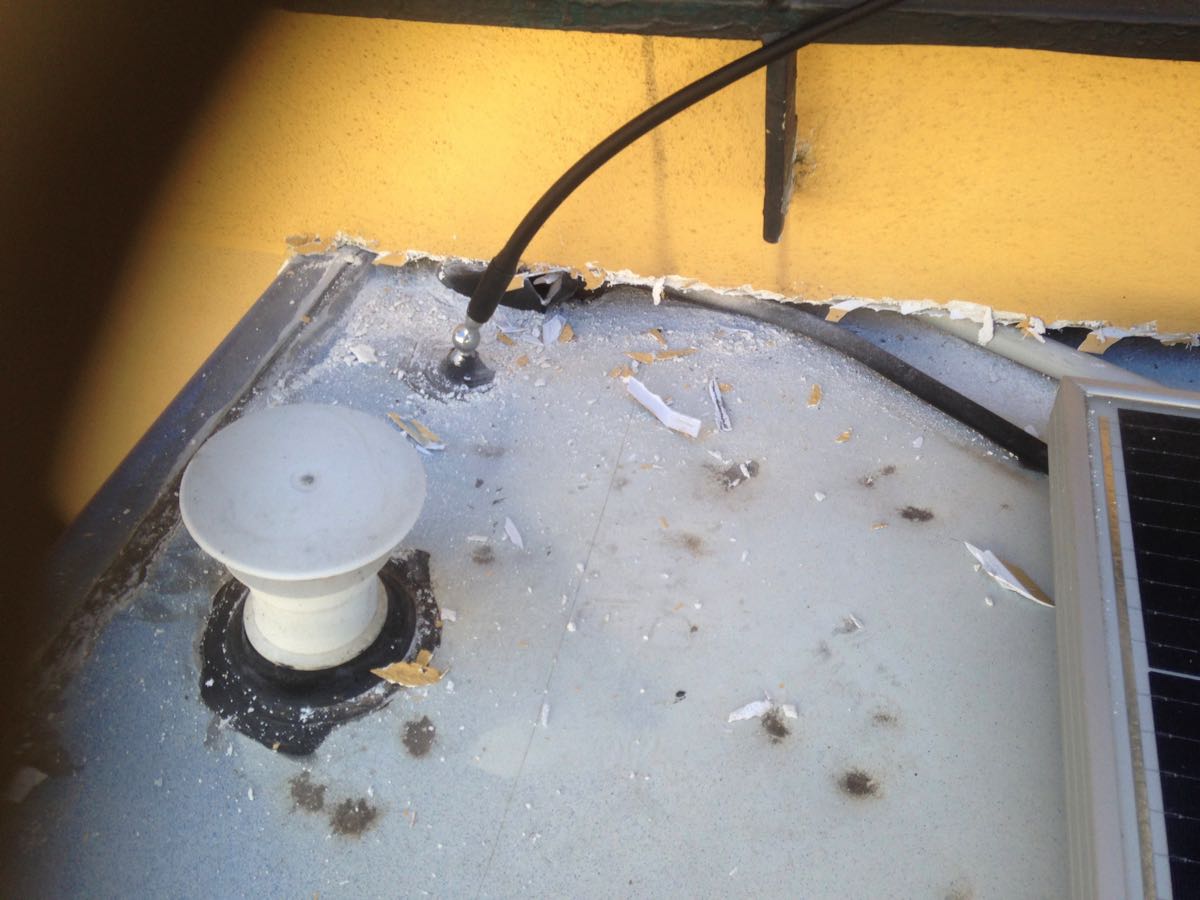 Suddenly, a would-be mechanic comes along and lets the air out of both rear tyres without being asked. When he also wants to hang his jeep on Big Fredi and rip it out brutally, we fight back fiercely.

So now there is no air left in the tyres and the fire brigade has no suitable equipment to help. Finally, with the help of the differential lock and many attempts back and force under the balcony, we manage to get free again. 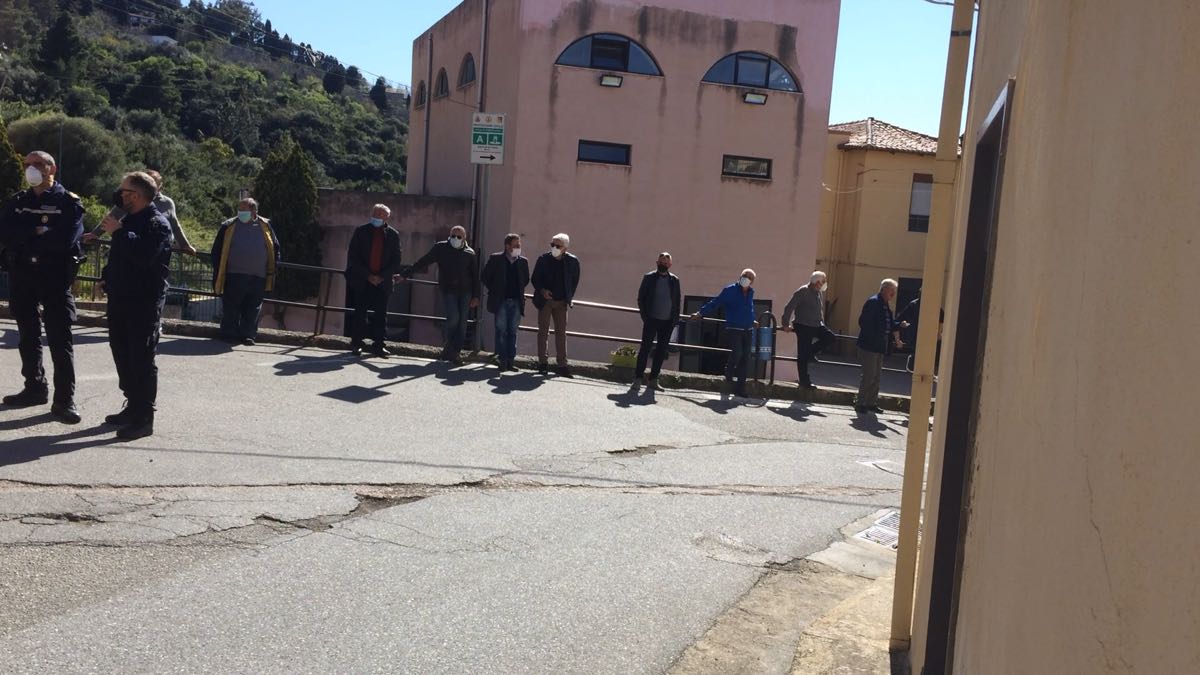 At the same time, a funeral was taking place next door and a large crowd of onlookers were commenting on the whole event.

It must have been more exciting than a TV thriller. After a good 2 hours, the road was reopened. Stella, the homeowner had not only calmed down but showed us a lot of empathy. The data for the insurance was exchanged and we were able to spend the night 500 metres further on in a small car park in front of the Lourd Grotto. Stella even came by to offer her help if we needed anything.

There was still a lot to do for the day after. The differential lock could no longer be unlocked and the waste water barrel, which was a hindrance to the fire brigade, had to be refitted. In addition, the awning had to be disposed of. The master mechanic from the workshop, who had also pumped up the tyres properly again, agreed to dispose of the parts of the awning that were broken. What there was to salvage, we packed up. Wilfried managed to repair the differential lock. It could no longer be unlocked and so we would not have been able to continue driving in any case.

Apart from a dent in the roof and the side of the cabin, there was no more serious damage. Technically everything was ok again.

We wanted to find the parking place recommended by the mechanic for the next night a few kilometres further on. When strong gusts of wind greeted us there, we decided to continue looking for the next place to sleep for the time being, when we were already in Messina and on the right way to the ferry. 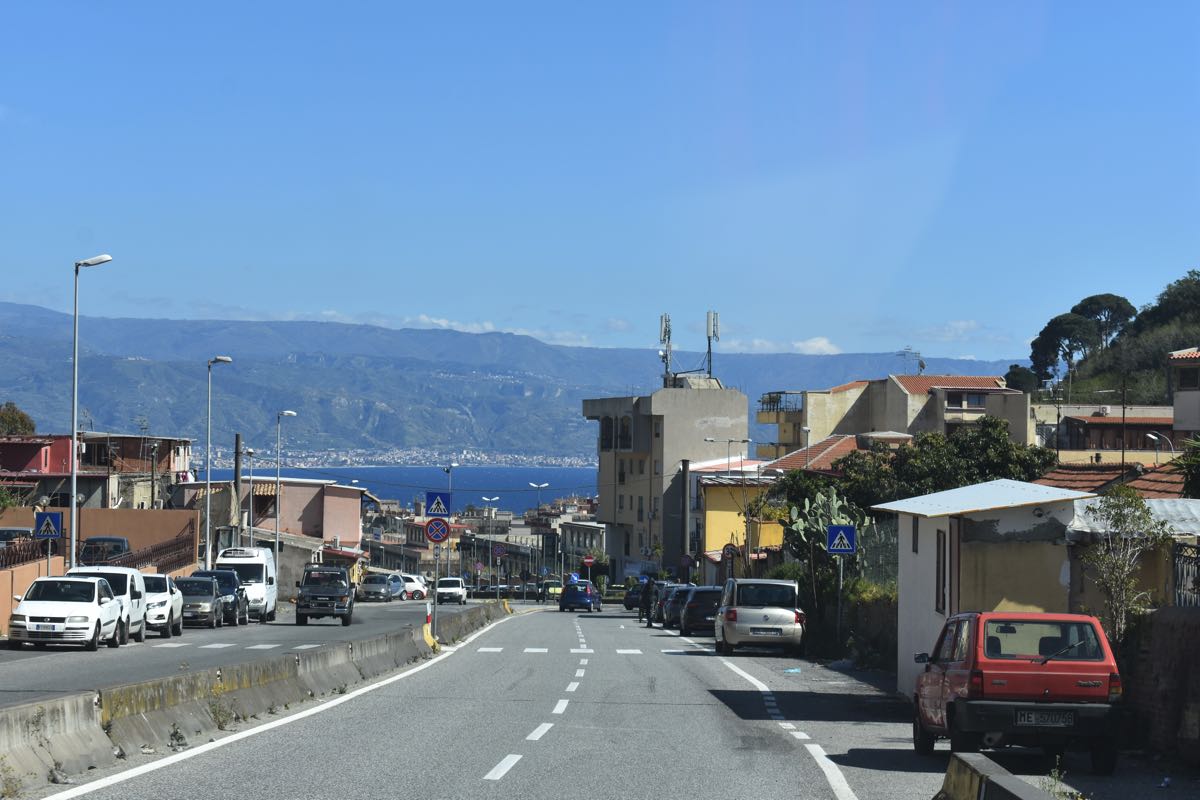 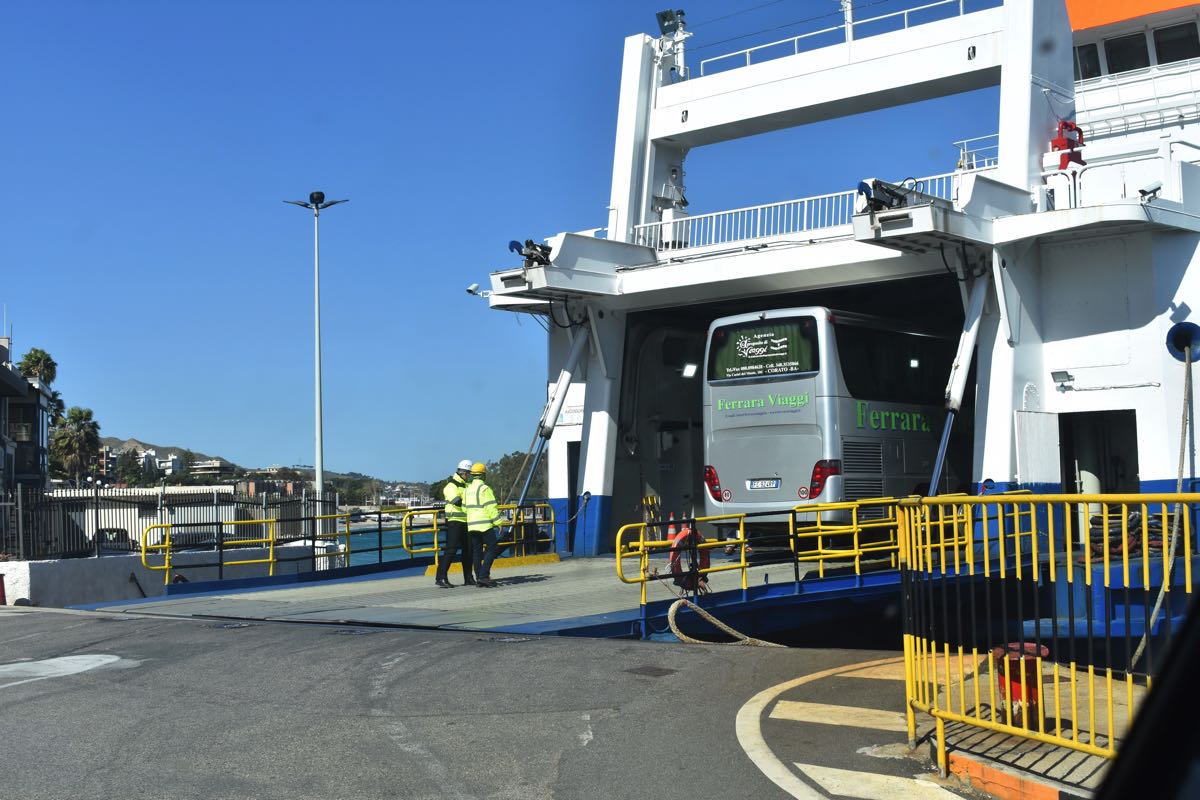 So we decided to cross on the same day.

It was windier but not stormy yet. Nevertheless, the alarms of some cars went off one after the other, which gave me a creepy feeling.

I, at least, was glad to have solid ground under my feet again.

The first night we stayed in Villa San Giovanni on the beach. We were the only camper van, as always.