Because there was such a great free WLAN for us,

we stayed a second night in the car park of the Dobre Vode restaurant. While it was still 11 degrees in the morning of the first night, we woke up the next morning with only 8 degrees inside. However, the sun and the gas heating quickly warmed up our Big Fredi to my operating temperature. There was absolutely nothing to do at the car park. The main road was not passable because it was too dangerous, and the descent to the Morača River was too steep and impassable. 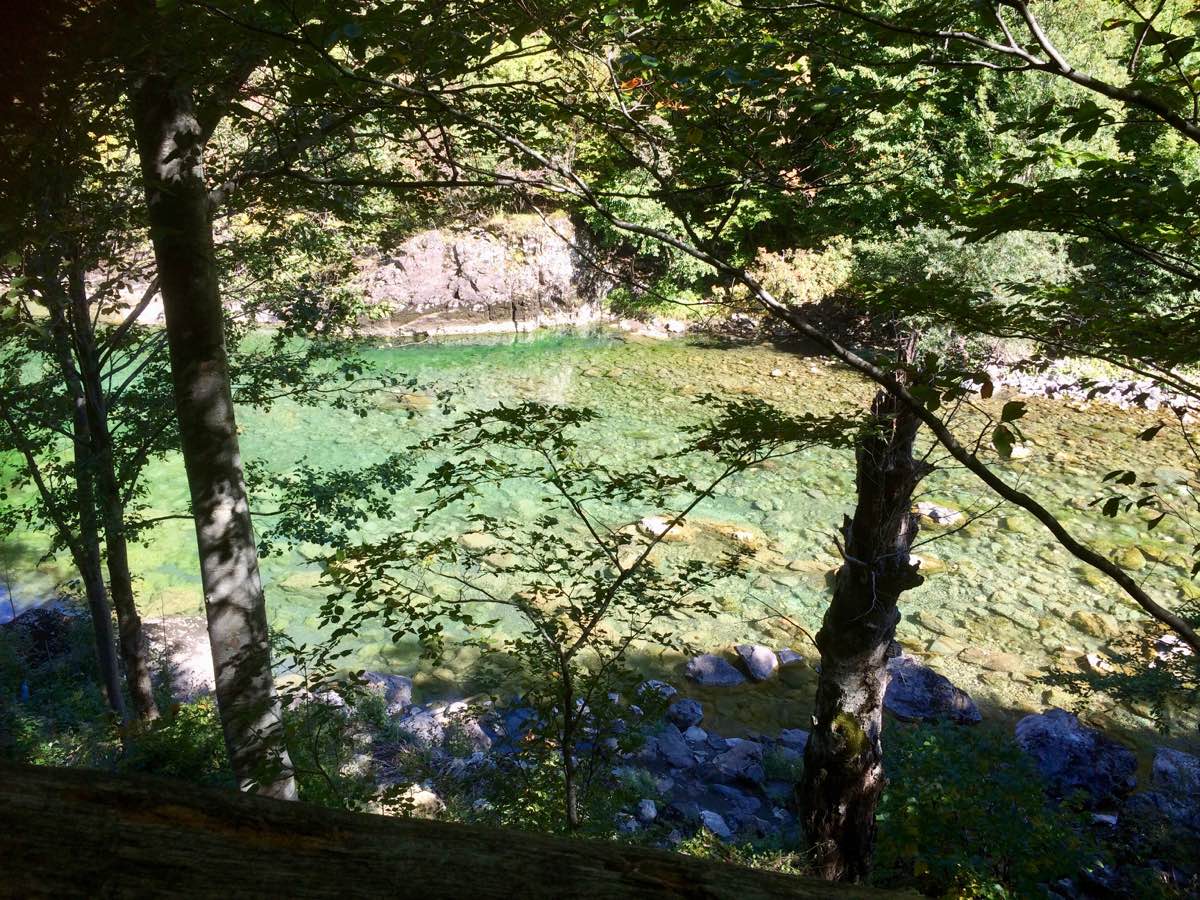 Yesterday (5.10.2021) around noon and well rested, we started the journey to the sea. At least that’s what we thought. (My geodata of the pitch by the sea was copied wrongly from Park4night or entered wrongly into the sat nav, so we ended up in the middle of nowhere).

But, let’s take it one step at a time. On the main road of Montenegro, which connects the north with the south, we drove for about an hour until we reached the petrol station shortly before Podgorica on a well-built, curvy main road.

A completely unlit and long tunnel and many short dark tunnels along the way required Wilfried’s full concentration and attention. Driving through Podgorica was no problem either. Nice wide roads, clearly laid out and the other road users certainly were not Italians.

Then it got wild. Our sat nav didn’t want to take us to Kotor, where we wanted to go, but to some nest on the mountain. So we continued on what I thought (but kept to myself) was the wrong road towards Nikšić and not Cetinje. After 2 km, the road ended in a kilometre-long dusty construction site. 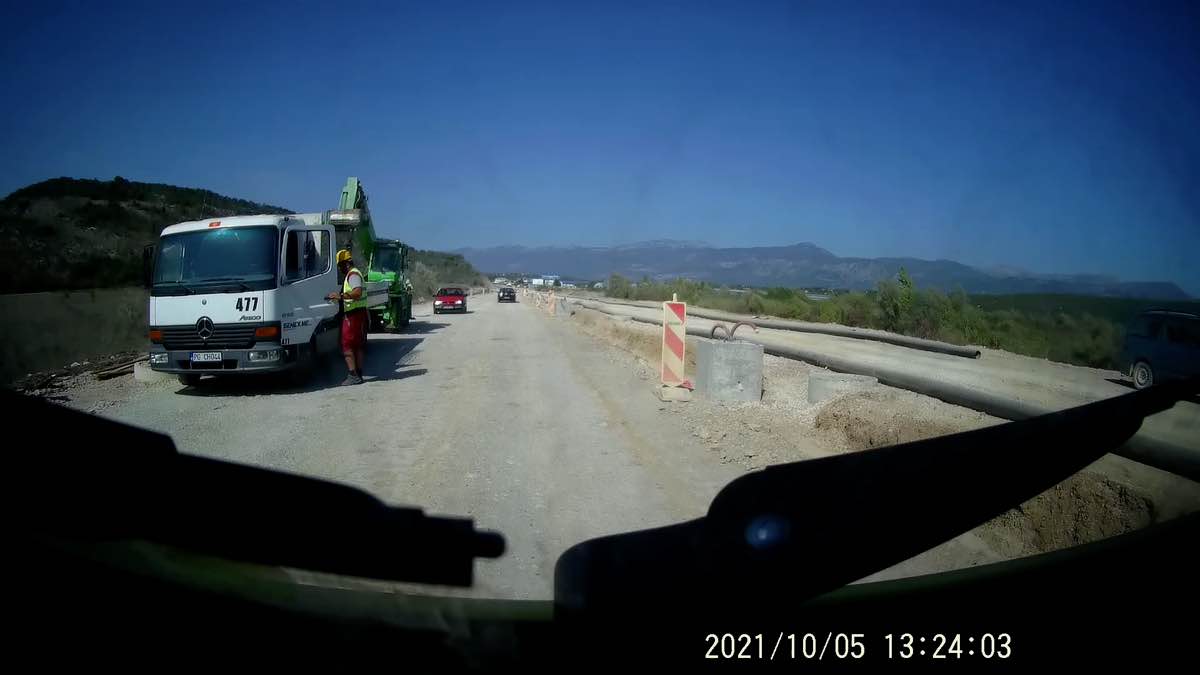 Busy workers on the right and left in their huge construction machines and craftsmen on foot could be seen. It went along at a walking pace. Then the exit to a tiny village and an entrance to a single-lane road. Marked on my road atlas only as a dotted line and shown on the sat nav as 24 km with no way back, we were kind of stuck. 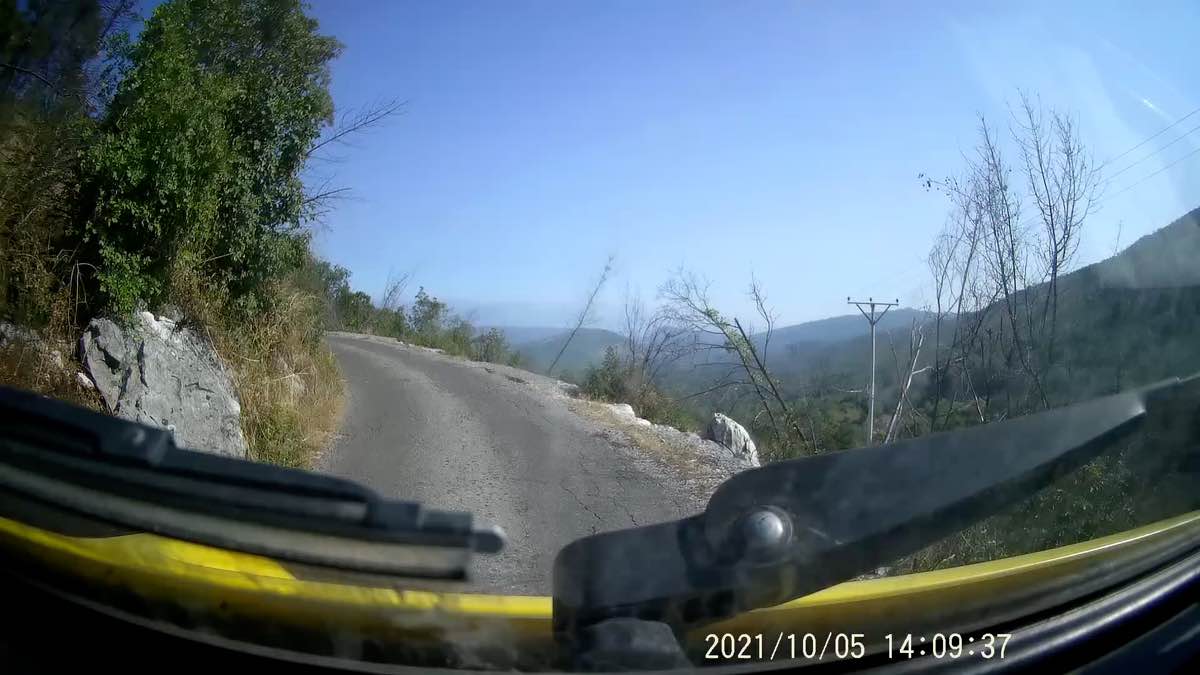 From then on, it was just a matter of driving on, praying and hoping that there would be no oncoming traffic. But all the praying didn’t help. We let 2 cars pass in a bay, 4 or 5 times we met a car. Fortunately, a large and heavy lorry loaded with wood found a place to take evasive action and let us pass. The road went steadily uphill. 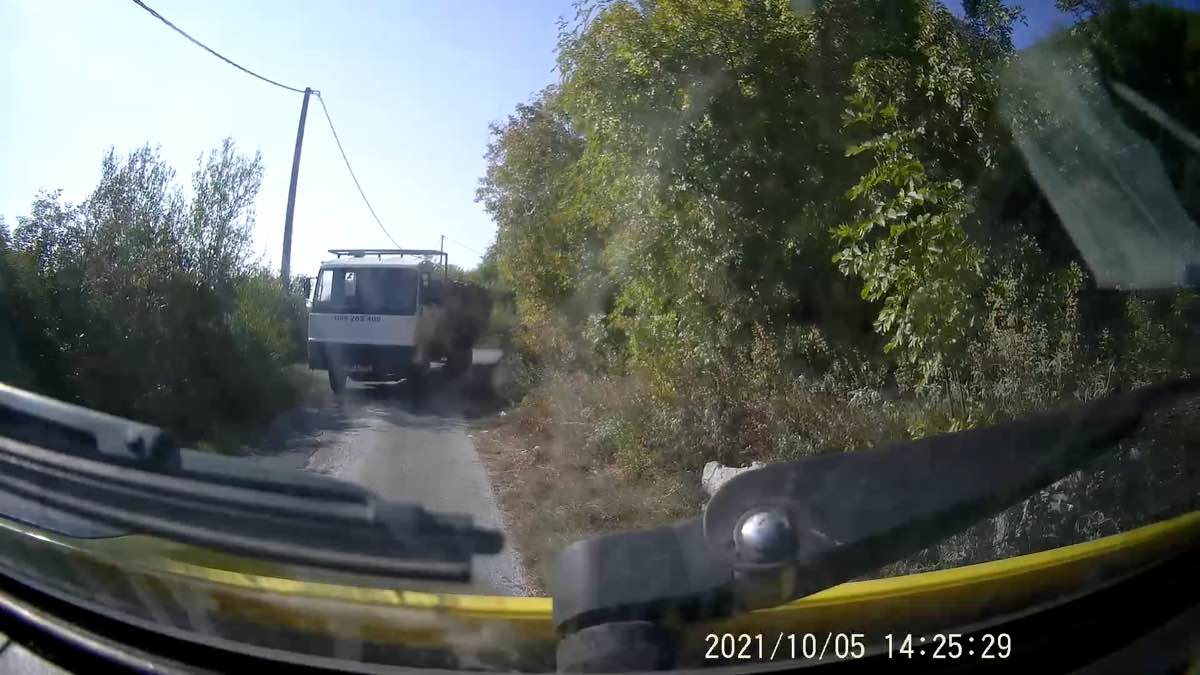 On the right or left the abyss, on the other side rocks or bushes. The speed on the sat nav showed 11 km/h. After an hour and 15 minutes, which felt like an eternity, we suddenly saw a wall on the left side of the road. A turnoff led directly to the car park of a cemetery. A spacious, level place, a burial hall, a covered place that reminded us of a bus station, but was apparently only meant to provide shade during longer funeral ceremonies. 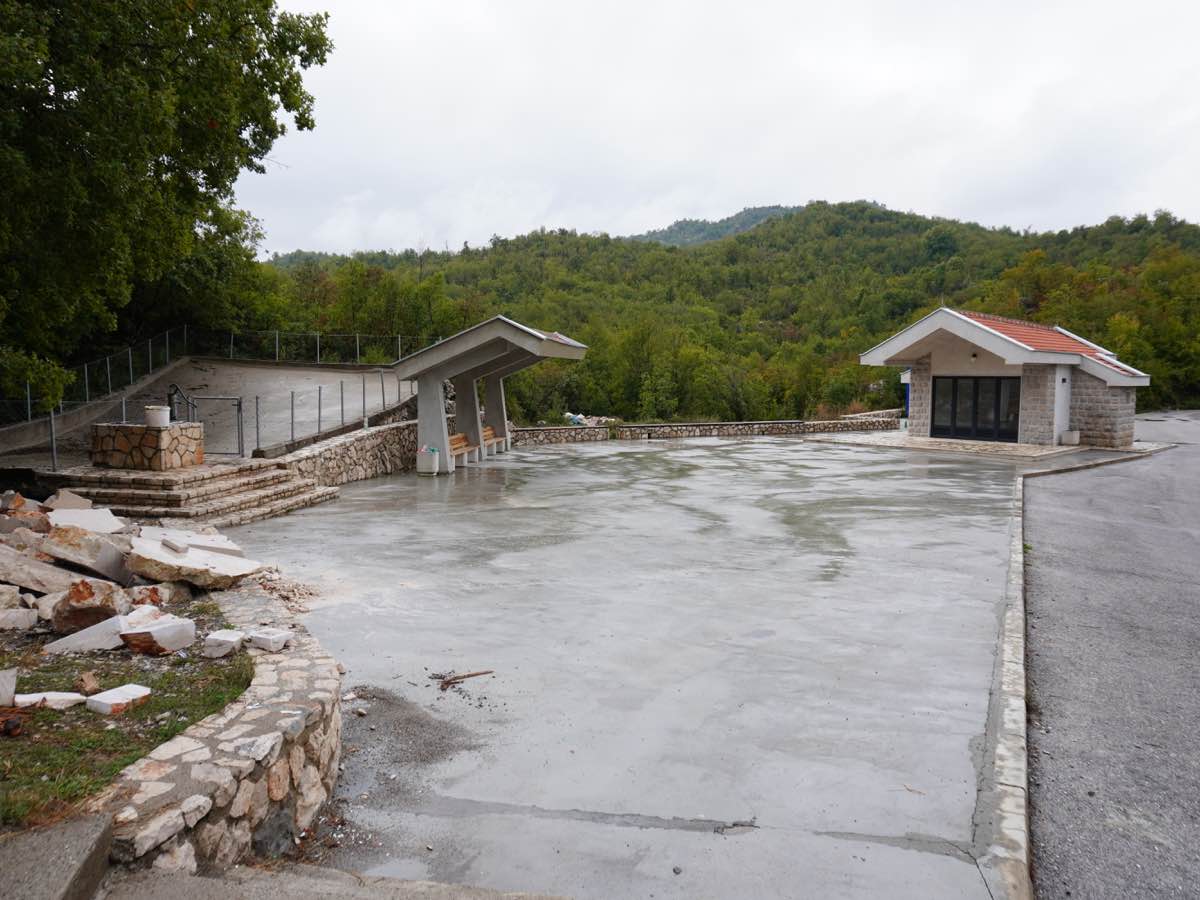 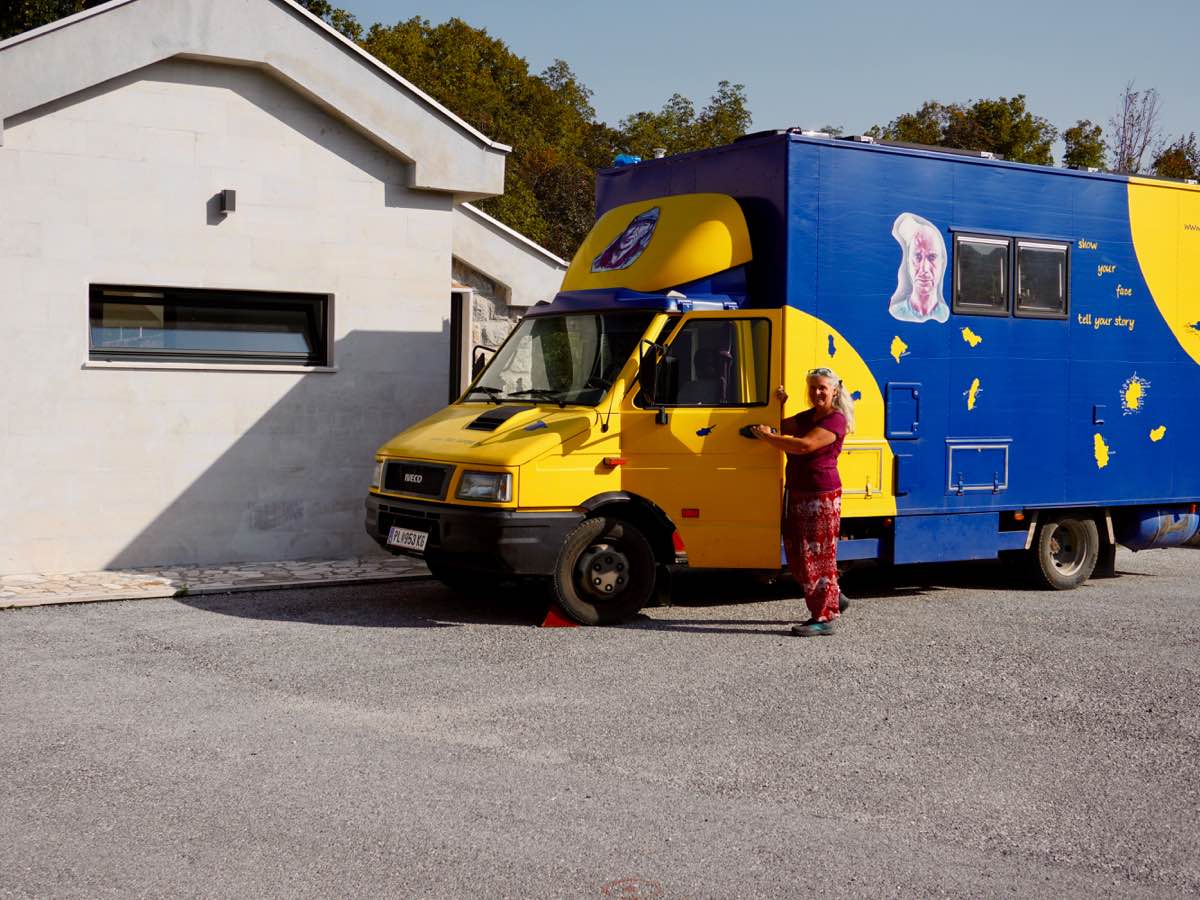 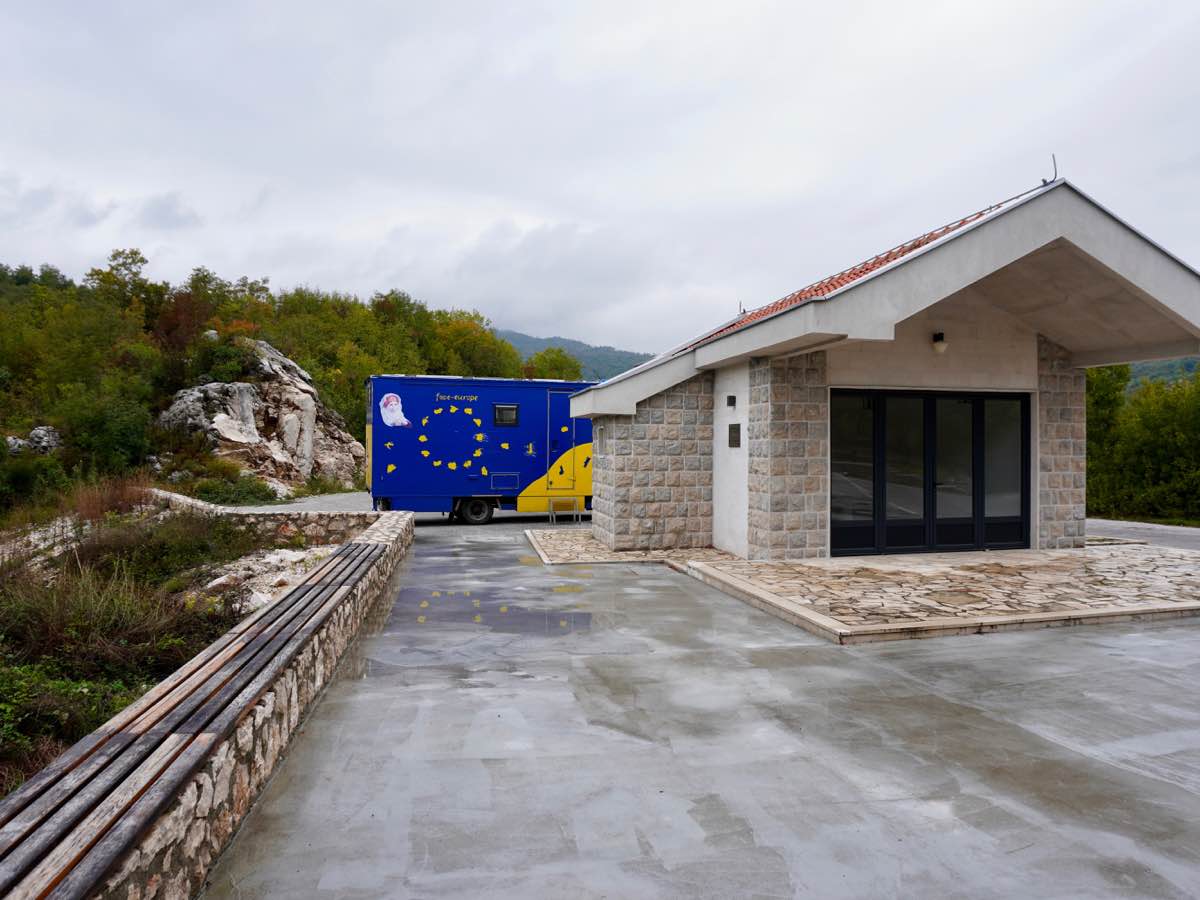 We immediately decided to make this place our sleeping place. Absolutely quiet – the dead are not expected to make a racket and the next village is 14 km away and not the focal point of merry life. As we drove through, we were merely gazed at by a few curious children’s eyes.

I packed the vegetables we had cooked the day before into a pita, as I had learned from Ana in Belgrade. It tasted delicious. The rest will be eaten cold today.

My short walk on the main road turned into a 5 km excursion, stopped only by the barking of dogs that suddenly appeared at a lonely farm. 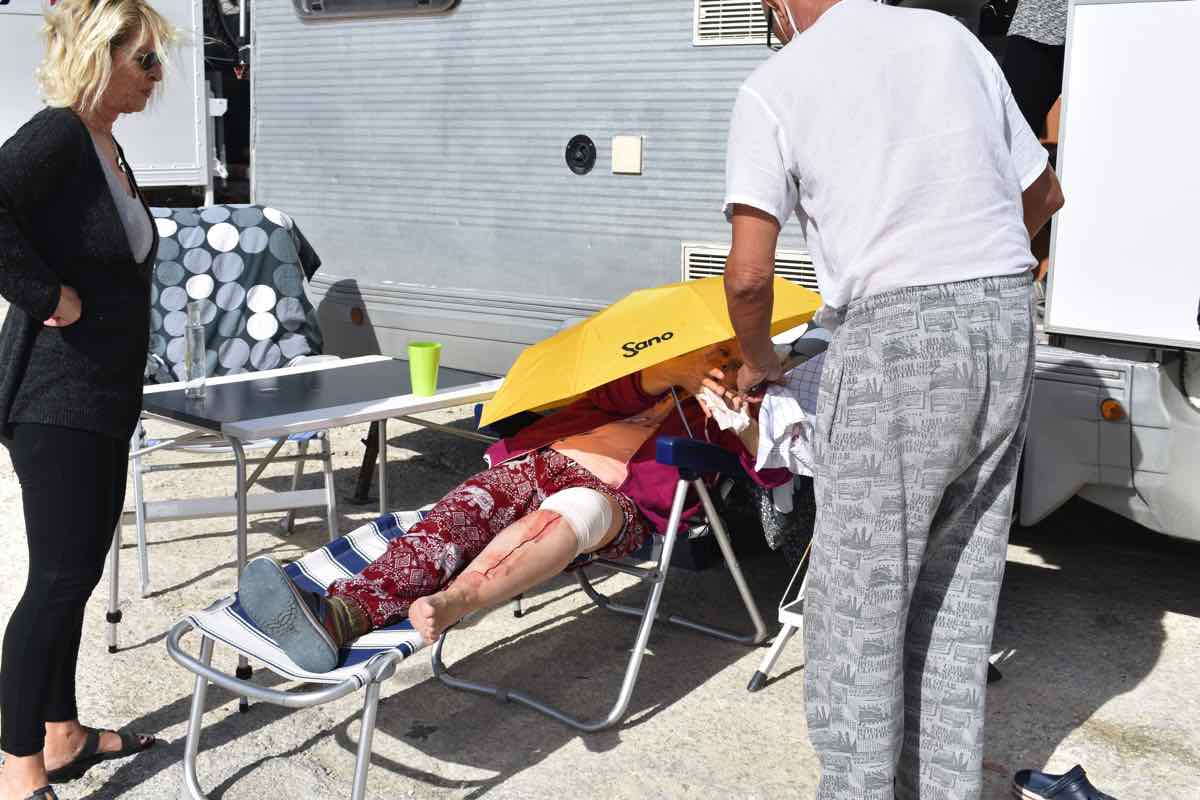 As my experience with dogs (see Malta January 2021) is not very rosy, I immediately turned around so as not to turn the two critters against me even more. One of them chased me from a safe distance. I’m sure he smelled my adrenaline pumping.

But the walk was definitely worth it. It did me good to move in the fresh air. The temperature was pleasantly warm, the mountainous country further north had been much colder at this time of the day.

Wilfried, who had stayed by the car, reported a sudden bustle at the cemetery and one of the men even approached him. Encouraged by him, I also approached the men after I had returned to the car. They were workers who had to measure something at the cemetery. They had arrived in a white Mercedes and one of them looked more like a boss. I could also talk to him in English and ask for directions to Kotor. Armed with a small drawing, 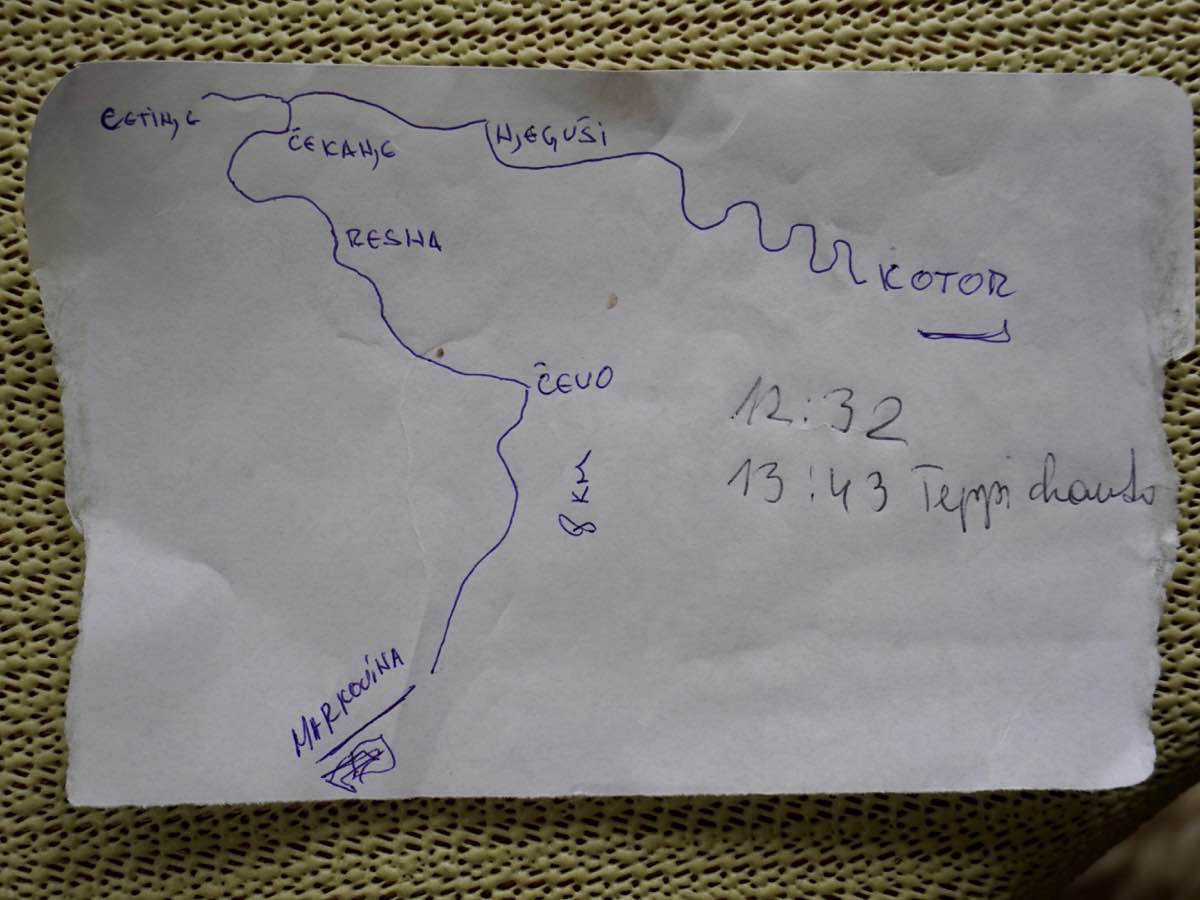 I returned confident of victory to Wilfried, who was able to trace our mistake on the sat nav. We changed the navi to Kotor and tomorrow it should be 65 km to the sea. The temperatures are already much milder. Even at night the temperature only went down to 16 degrees.

Early in the morning, a thunderstorm began to herald a rainy day. So we decided to spend a second night here. In the middle of the mountains, at the cemetery in absolute silence.

We let ourselves be surprised by the further course of the road. It can’t really get any worse now.

After eating yesterday’s cold pita, it slowly became lighter and lighter, the rain stopped and the sun tentatively blinked through the clouds. A distinct call to go outside made me inspect the cemetery more closely. 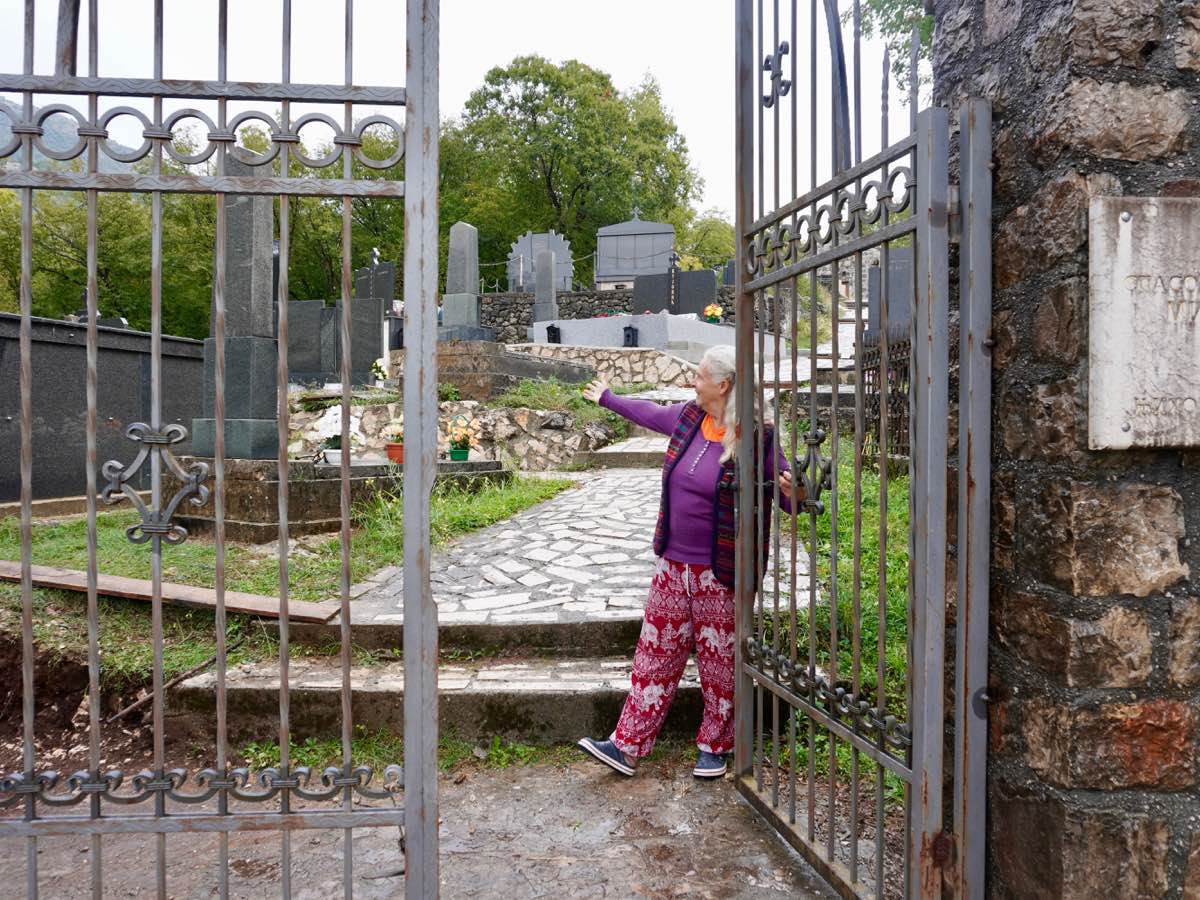 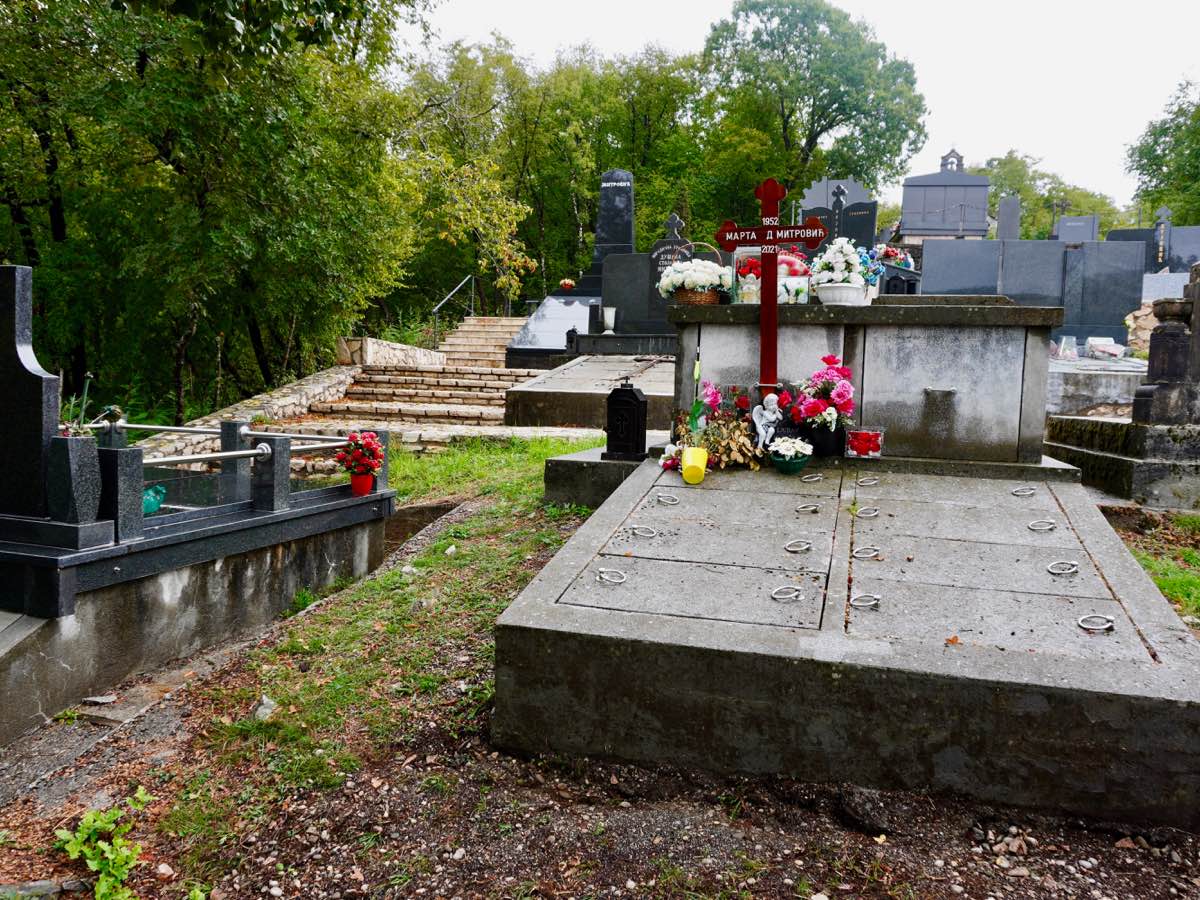 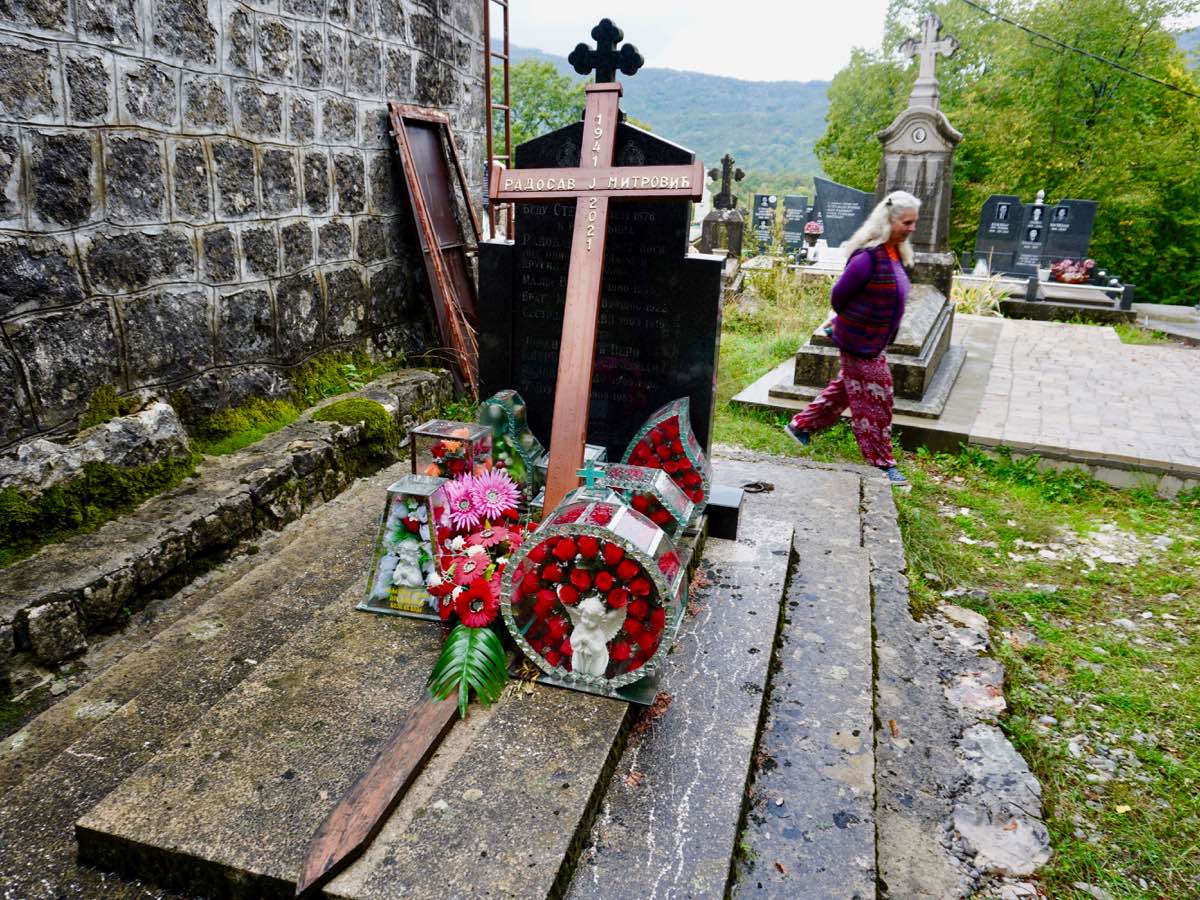 What an elaborate mountain cemetery. Vienna’s central cemetery has – I think – no more large burial grounds either. 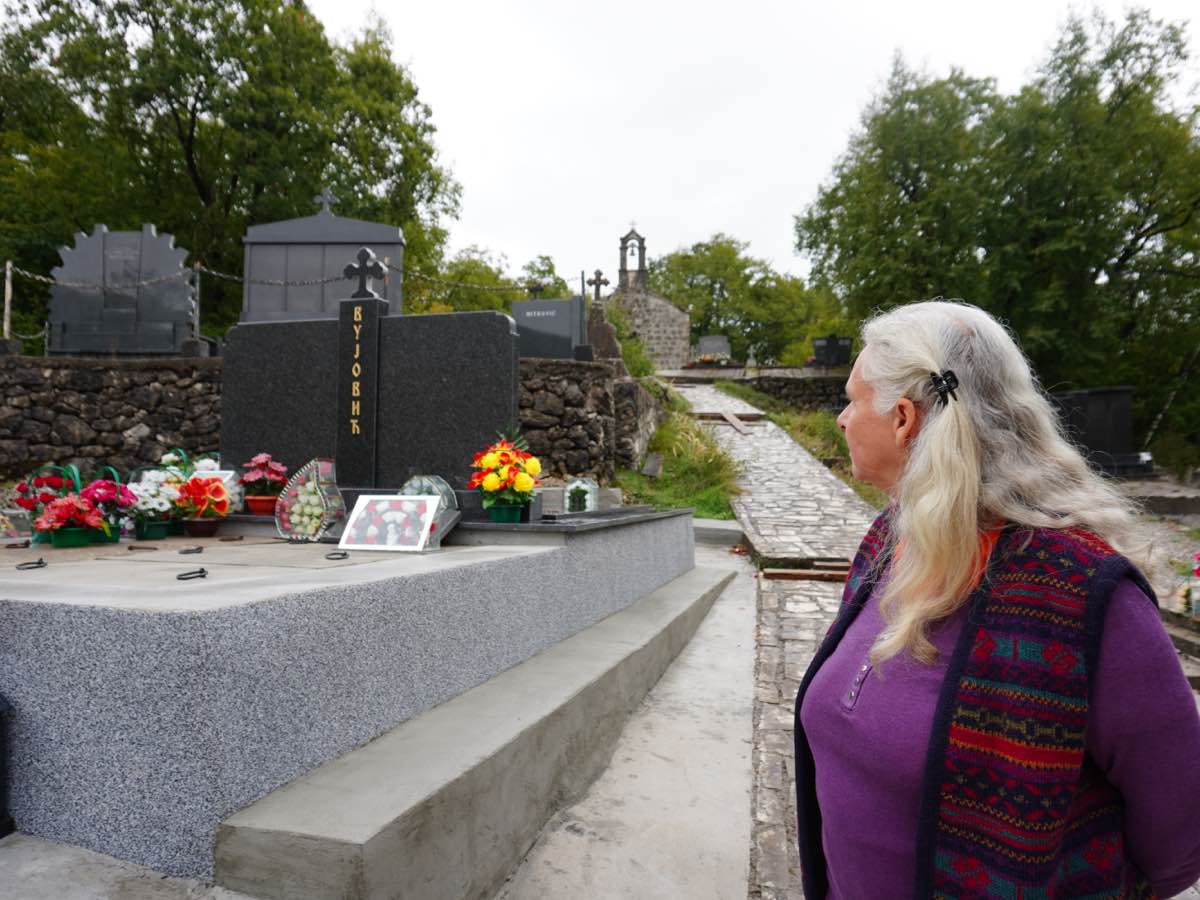 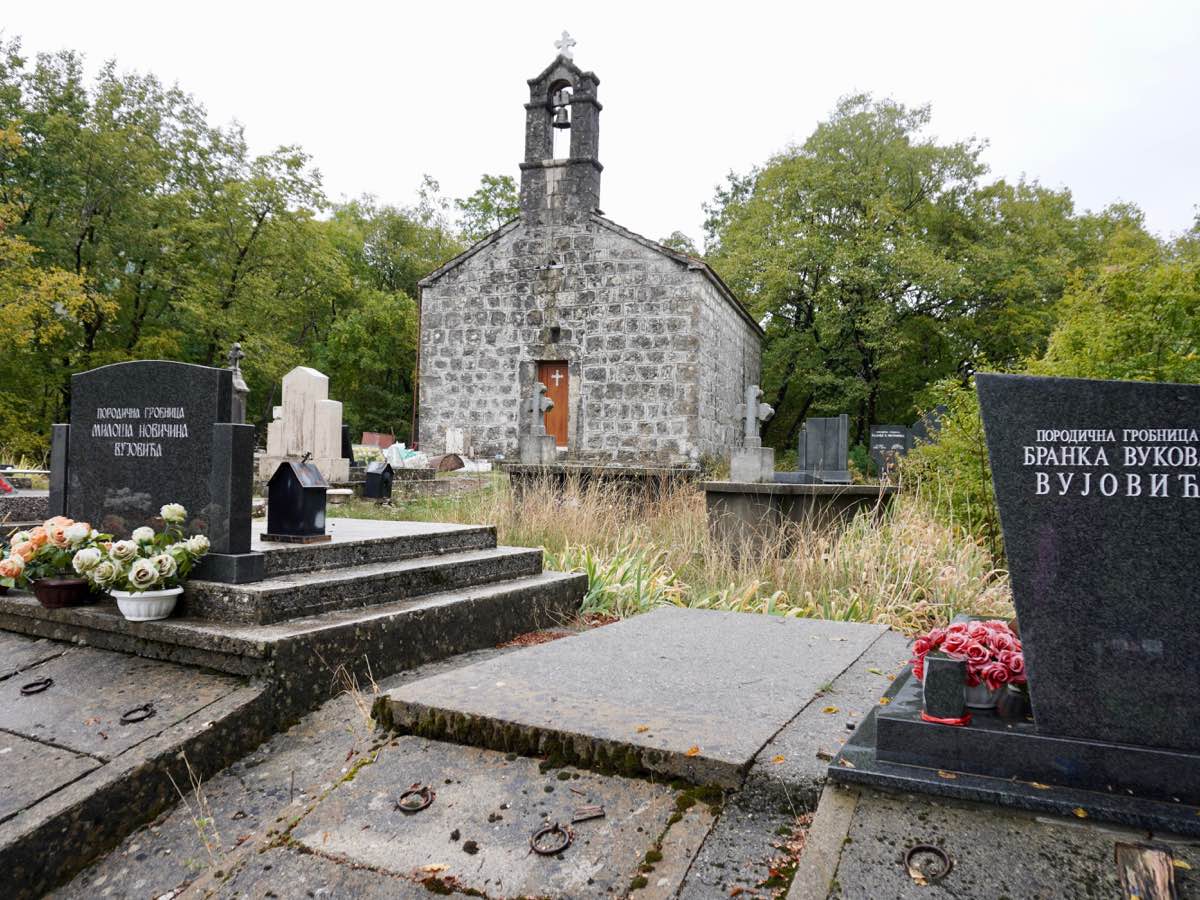 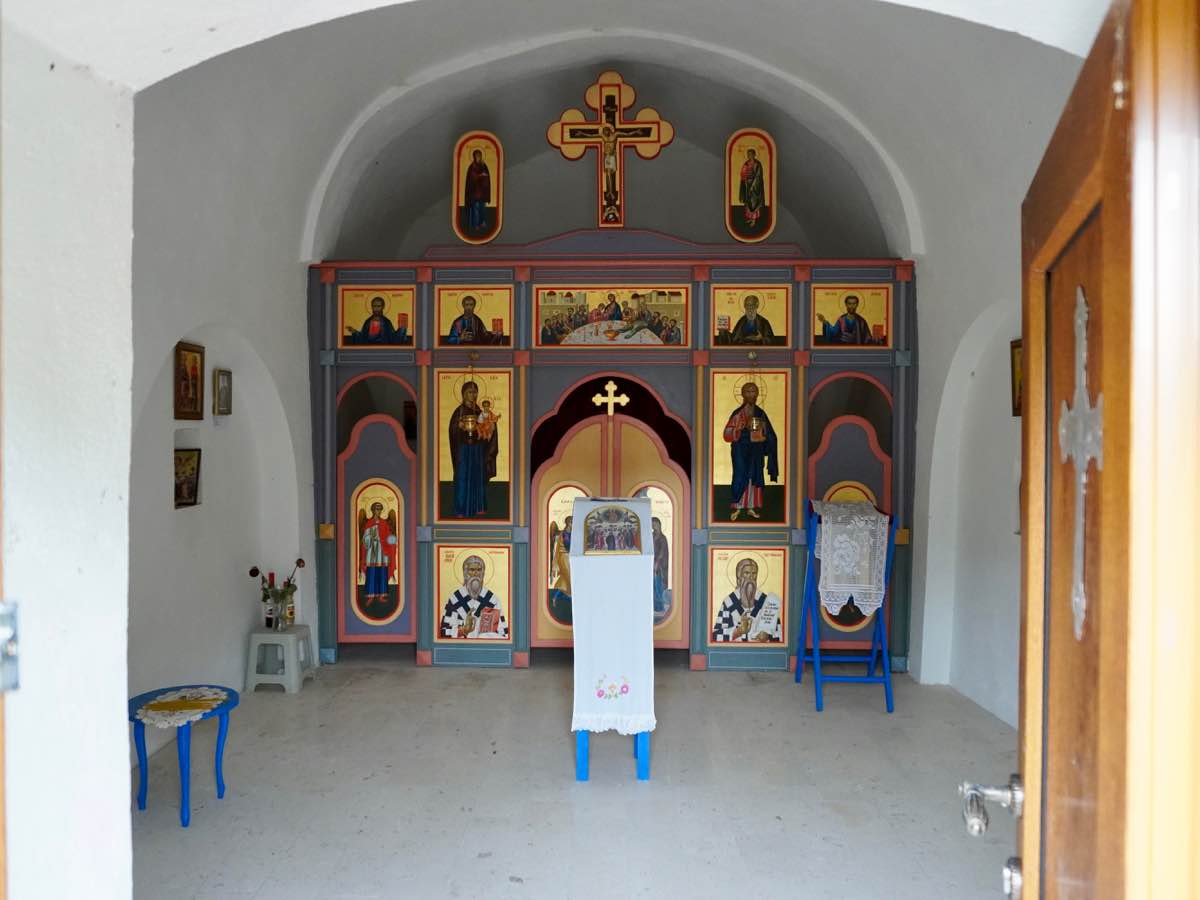 The chapel at the highest point houses beautiful icon paintings. I wonder how the large gravestones could have got here. It would take a heavy vehicle to get here. With these roads, it’s a huge effort.